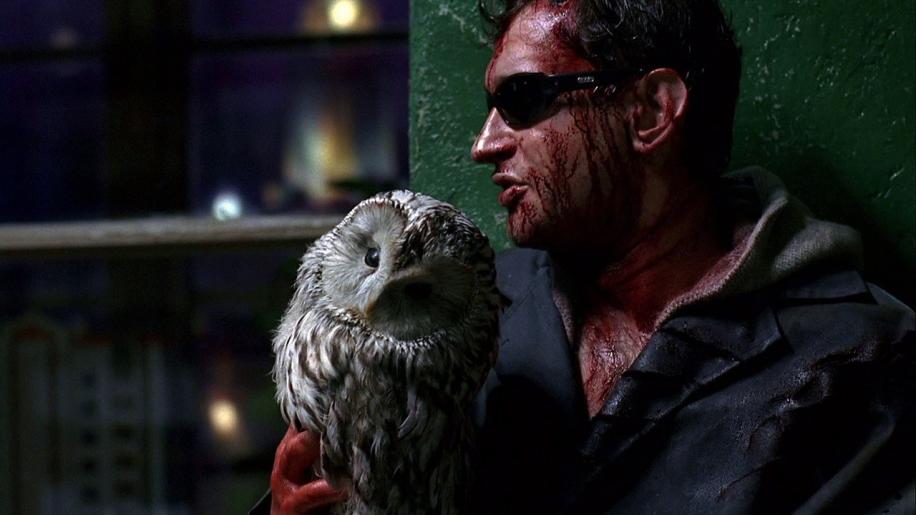 In one of the strongest summer blockbuster seasons of recent memory, one film managed to achieve almost sleeper success (if a big budget summer film could ever be described as such). Wanted starring Angelina Jolie, Morgan Freeman, and James McAvoy managed to sneak up almost un-announced and achieve a high box office gross. A lot of this could be down to the astonishingly kinetic trailer, showing cinematic effects that had not been seen before. Or at least, that had not been seen by many before. Those who had had the pleasure of seeing the director Timur Bekmambetov's previous international release Night Watch already realised what a breath of fresh air he was capable of bringing to the action genre.


The film, based on a Russian novel and also known by its native title of Nochnoy dozor is an endlessly inventive and creative trawl through a strange fantastical underworld that exists in a parallel to our own society. According to the mythology explored here, there is a group of people with unusual powers - shapeshifters, vampires and the like - called The Others. This group, so the story goes, are divided between the forces of good and the forces of evil - the light and dark others. The two sides are perfectly evenly balanced and after an ancient battle was fought, a truce was called. The two will exist side by side, following the rules of the truce until the stories of legend are fulfilled. At this point, an Other with more power than any known before will enter the world - and whichever side he joins will be crucial. At the point, the delicate scales of balance will be tipped and the consequences could be catastrophic for the world.


The film begins when Anton Gorodetsky (Konstantin Khabensky) consults a dark witch about getting his wife back who has left him. She tells him she can do it, but that the woman is pregnant with another man's child. In order to get her back, Anton must consent to the dark witch performing magic to terminate the child. He must take the responsibility for the action. This, he agrees to do - and the spell is cast. Before she completes it, however, three representatives of the Night Watch (a group devoted to making sure the Dark Others keep the truce) descend and stop the action. When they realise Anton can see them, they realise he is one of them, he is recruited to join them. 12 years later, in the process of performing his duty, he becomes involved in the tracking down of the powerful Other who has just become known to both sides. But the events of 12 years before, and his complicity in the murder of an innocent child (even though it wasn't carried through) is about to rebound on him with horrendous consequences.


The plot is a brave attempt to create a whole new mythology as a background for the action on screen, and gives the film a lot of background depth and detail for the viewer to cope with. This, unlike for example Highlander which uses a very basic mythology as it's background, makes for a very dense and layered film. It is highly likely that if you are coming to the film for the first time, you are likely to be spending a lot of your time rather confused and lost by the goings on in front of you. The film jumps backwards and forwards through the timelines in a completely non linear way, and at no point does anyone sit down and conveniently explain through hackneyed dialogue what is going on. The film credits the viewer with a great deal of intelligence and would rather leave them to work out what is going on for themselves.


This can be very much to the film's detriment on first viewing. I first saw Night Watch in the cinema and came out feeling totally blown away by the visuals I had seen, but with feeling that a lot of the film had gone completely over my head. I hadn't understood completely what I had just seen. Yet those amazing visuals and energy has stayed with me over the last four years and I had kept meaning to revisit the film to see if it would reveal itself to me in more detail. That the film stayed with me so long, even with that sense of confusion, is a testament to the film's power.


Once I did see it a second time, for this review, so much more began to become clear to me. I began to see that the cleverness was not just down to the way that the film was shot - the whole story was actually much more coherent than I had realised on first viewing. It is just the kind of film that welcomes, no needs, repeat viewings to fully reveal all it has to offer. Once it does, under the glossy, flashy surface there is much going on.


The acting within the film is superb, especially when you consider it is such a genre piece. Konstantin Khabensky, who is the lynchpin on which the film rests is a real discovery. His character goes through a very subtle, lengthy arc - it is almost not noticeable at first just how much he is changing as the film goes on and he discovers a cause he genuinely believes in. The actor portrays him as a young innocent to start with, unable to really consider the consequences of his actions - and then, 12 years later he is a drunken shell of a man, stumbling through his duties as a member of the Night Watch, unable to truly believe in what he is doing. When the significant Other comes on to the scene, and Anton realises his true identity he discovers an inner strength that truly begins to shine through on the screen. It is the kind of performance that is never going to win an OSCAR, but is not worth any less due to this.


The rest of the cast is very much of the ensemble variety, and I am not going to list them here. They are, after all, Russian - and you are unlikely to ever see many of them again in your local multiplex. However, the nature of an ensemble is to complement each other and the story and you can rest assured that they do so here. There is not one character who doesn't ring true, and they are all portrayed superbly by the actors.


But despite these excellent performances, the real star of the piece is the director who brings an electrifying vision to the screen. He just shows so much imagination in the way he moves his camera, in the way he visualises what is going on inside the character's heads, that the result is almost a sensory overload for the viewer. There are many, many, stand out moments here that it is almost impossible to single a few out. However, one scene where a bolt works free from a crashing aircraft, and we follow the bolt through the sky, down through a cockroach infested ventilation shaft, and into a woman's cup of tea is just one example. The scenes where Others are flitting in and out of the gloom (a twilight where they can exist unseen by human's is amazing) and some of the fight scenes are fantastically kinetic. Trust me, you may feel you have seen everything in cinema - but some of the ideas you see here will blow you away. It is not at all surprising that Hollywood came a calling after seeing this.


Night Watch, then, is a stunning film. It is densely plotted, visually amazing, and well acted. There are times when some of the physical effects (a man pulling his backbone out to use as a sword) are a little unrealistic - but that is to be expected. This is not a big budget Hollywood blockbuster. And in a way, these effects add to the charm of the piece. It is also true that if one thinks too deeply about the story then inconsistencies will rise up and some of the plot will begin to unravel. However, these are minor drawbacks in what is probably one of the most original films to come out of any country in the last ten years. If you have not had the pleasure of a night spent in the company of the Night watch, then you really do owe it to yourself to do so. You will not regret it, and you are also likely to want to revisit the world time and time again, in order to fully understand it's complexities and to fully enjoy the director's style. Blu-ray is the perfect medium for you to do this, and I recommend the film whole heartedly.