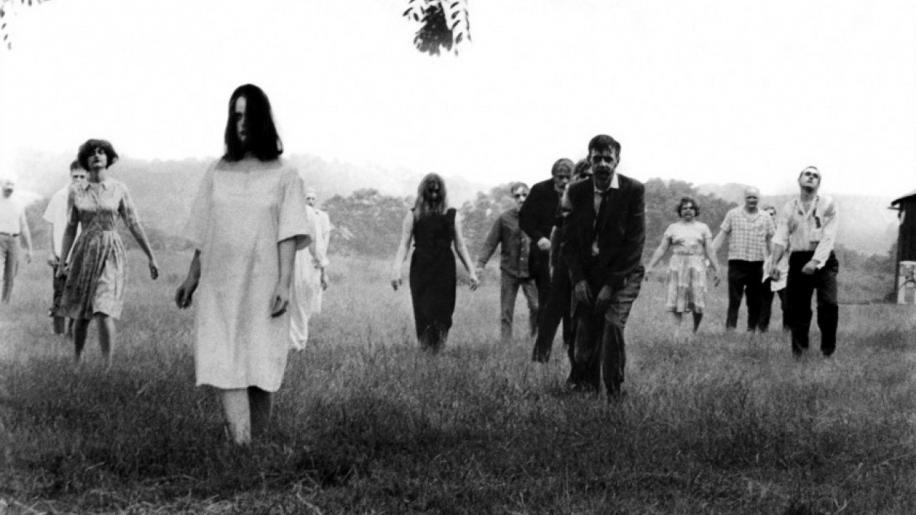 George A. Romero pretty much single-handedly created the whole zombie movie concept with this sixties flick, Night of the Living Dead. Set largely inside a house, he followed it up with a sequel, Dawn of the Dead - set in shopping mall, along with the third film, Day of the Dead - in a Government facility. Recently we have seen a resurgence of zombie movies - the fun Resident Evil computer game tie-ins, the excellent Rom-Zom-Com Shaun of the Dead and a perfectly enjoyable if inferior remake of Romero's Dawn of the Dead itself. He has now returned to zombie movie duty with the dark and entertaining Land of the Dead - which just opened - so it is only right that we go back to the very start to see where it all began.

Brother and sister Johnny and Barbara have journeyed several hundred miles to visit the grave of their Grandfather but, after delivering the wreath they find themselves attacked by a strange, demented man stumbling around the graveyard. Johnny tries courageously to fend off the relentless thug but Barbara flees feebly, chased down the road and across a field (by one of Romero's fastest-moving zombies) until she comes across a seemingly deserted house. She soon encounters Ben, the hero of the piece, who is aware and on top of the situation until the hapless Barbara arrives. They seal up the house with planks of wood but find that they are also not alone in the house - two couples and a child were hiding in the cellar all along. As news comes in on the TV and radio and they begin to learn the behaviour of their strange opponents (they are slow, only seem to be stopped by blows to the head and devour human flesh), they try to devise a plan on how to get out of the house and reach a safe haven.

Shot some forty years ago in black and white, with little-known actors and limited effects, the original Night of the Living Dead is still arguably the definitive zombie movie. It combines all of the concepts of claustrophobia, desperate struggles against indefatigable enemies and a small group of survivors being attacked by innumerable foes into a taut, well-directed horror masterpiece. It is also quite ahead of its time in terms of its horror content and in the fact that the central action hero is black (he is also probably the only one of the characters who is not relentlessly irritating.) The lead female, Barbara, is Romero's answer to a human player who behaves like a zombie - often either speechless or mumbling monotonously and incoherently. Many of the other characters are either ludicrously cowardly or behave in a similarly stupid manner (or both), becoming more of a hazard to their fellow survivors than the zombies themselves and raising issues of race, sex and class struggle within the closed environment.

The characters and the acting are not as important as the aforementioned ground-breaking ideas and concepts, however, the biggest of which has got to be that racially radically breathtaking idea (at the time) of a black hero holed up in a house with a white girl (who he slaps around no end because she is so dappy), shooting and beating white men to death, no less. Not to mention the redneck zombie hunters that soon appear on TV, foretelling any recent blind military assaults that you can think of. Between that and the surprise ending that is also eerily reminiscent of real life, the movie clearly utilises the same clever subtext tactics of Romero's later efforts, but here possibly to its most poignant effect. So what we are left with is a classic zombie movie - the classic zombie movie - which is still capable to putting you on the edge of your seat even after so many decades have passed and carries a weighty subtext that will leave you thinking about the issues it raises long after the credits have rolled. If you haven't see this first and best horror classic then you simply don't know what you are missing.