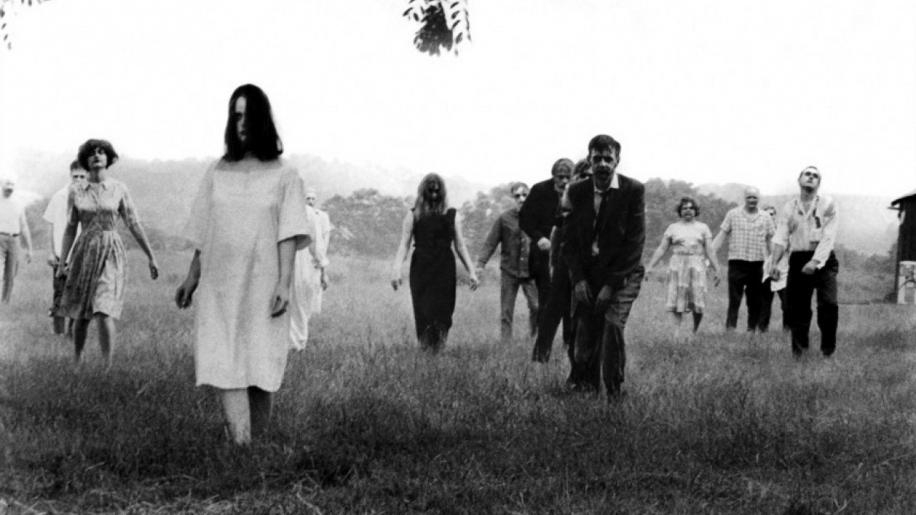 Night of the Living Dead is presented in a fairly rudimentary black and white 1.33:1 aspect ratio non-anamorphically enhanced fullscreen transfer. Considering that it is about forty years old, the detail is reasonably good, with no noticeable edge enhancement, little softness and sporadic grain. The contrast is pretty superb and the blacks are deep and solid at all times, allowing for rich shadowing. Sure this transfer still shows its age, but with remarkably few print defects and a perfectly acceptable picture, Night of the Living Dead looks better than I had expected it to. Night of the Living Dead has been given two main audio tracks - a remixed Dolby Digital 5.1 effort and the original mono presentation. Although the six-speaker effort certainly saturates your living room to a greater degree, there is no real directionality and it seems as if the mono track has merely been spread across the wider array randomly. Still, the dialogue sounds clear and the score and shock musical moments are right in your face whichever track you choose. We get a few effects - thunder striking, screaming, gnawing on flesh and general zombie mumbling - to enhance your environment and little noticeable bass. Overall it is a tough call between the two versions. Devout enthusiasts will vote for the original mono presentation and it is arguably better in this instance as the 5.1 track seems a little contrived. First up we get a full length audio commentary with the Director himself, George A. Romero, along with crew members Marilyn Eastman(Helen Cooper), Karl Hardman(producer / Harry Cooper) and Jack Russo(screenwriter). They talk about this being the definitive version, the improvisational tactics they employed to save money (the house was going to be destroyed anyway, the car was dented already etc.) and the way they deployed crew members into minor roles for similarly budgetary reasons. There is plenty of zombie trivia, background into the production itself and even a few anecdotes (like how the bodies in the cemetery were unearthed anyway by a tornado soon after the production) and overall it is quite a light-hearted, fun commentary as they reminisce over their creation.

There is a second commentary with a group of cast members including Russ Streiner (Johnny), Keith Wayne(Tom), Kyra Shone(The Child), Judith O'Dea(Barbra), Vince Survinski(Production Director) and Bill Heinzman(1st Zombie). This is also a nice offering, although they do cover much of the same ground as the first one, discussing the dates of production, the lengths they went to save costs (the zombies were mainly played by friends of the cast and crew), the troubles they encountered and the goofs(windows left open, hairstyles changed, night to day changes). Again there are lots of interesting effects (both sound and visual) that are revealed and several bits of trivia, normally involving near accidents from flung rocks, broken windows and so forth, and it generally makes for a nice listen, although coming across as slightly inferior to the first track.

Next up we get a sixteen-minute radio interview recorded with the late Duane Jones. It plays to very slowly changing stills from the production and is a very interesting addition. Duane talks about his involvement, explaining how he has no regrets but emphasising the fact so much that you can tell that it is not wholly true. He discusses how he was not really publicly recognised for his role, even when he was sitting in cafés and shops whilst it was being played in the background and talks briefly about what he remembers about the production.

There is also a ten-minute interview with Judith Ridley (who played Tom's girlfriend, Judy), this time with her in person, discussing how she got involved in the production and what she remembers about it. Again this is quite an interesting affair, especially when she talks about working with the other actors and the difficulties that the lead had working with an otherwise all-white cast.

Next up we get five minutes of selected scenes from Romero's lost film, 'There's Always Vanilla'. It is certainly an interesting few minutes of footage, despite my having little idea what it is about. Romero has cut together a film which, even in this promo-form which makes little sense and just has a pretty heroine getting involved with some dodgy people and then running from them, still grabs your attention enough for you to want to see the full version. This is a great addition.

There is also a photo gallery which consists of scrapbooks from the cast and crew members involved, behind the scenes footage, on set photos, diary notes of the production, letters and press clippings, and a props gallery that showcases all of the old production props that are now on display. Both galleries carry about eighty stills, some of which are quite revealing. (It is also possible to access the complete original treatment of the movie via your PC.)

Lastly we get the Original US Theatrical and Teaser Trailers that are in generally poor condition but, despite the ample use of a voiceover man, still give you a good impression of the movie without giving too much away. Night of the Living Dead is a superior debut for George A. Romero and it still resides as the benchmark for zombie movies. It is a must-see, plain and simple, not just for all you zombie lovers out there but for all those who want something deeper and more meaningful out of their average horror flick - this one packs a weighty sub-textual punch. This, the latest in a long line of varying DVD releases is pretty superb, with solid visual and audio treatment and a multitude of fine extras to keep fans happy. So if you haven't got a copy, then this version seems like a good bet (there are reportedly some extras missing in comparison to other versions, but all of the material you are likely to want appears to be present and correct) and if you have one of the dud colourised versions and you want to upgrade then it is also worth your consideration.