Night Of The Demon DVD Review 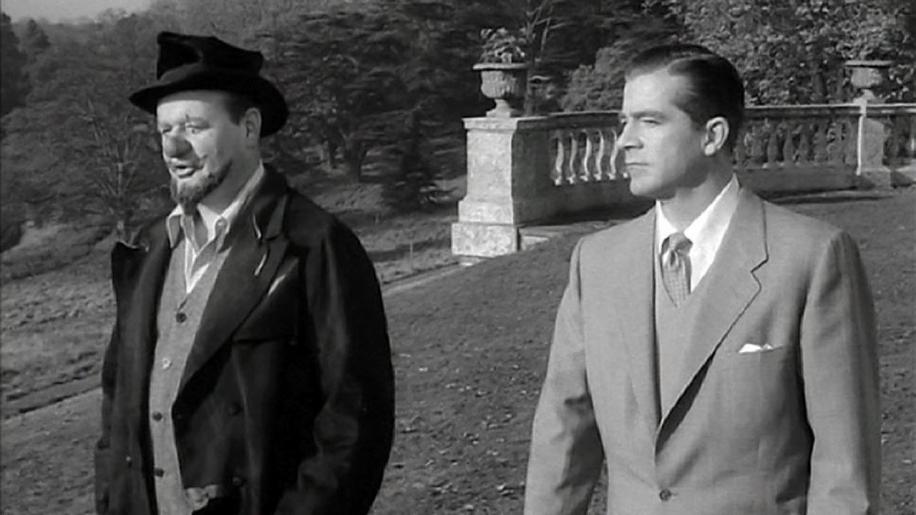 Restored and delivered in an accurate 1.66:1 anamorphic transfer, Night Of The Demon nevertheless looks a little worn and frayed around the edges. The nicks and scrapes of time have taken their toll with numerous speckles and flecks marring an otherwise quite surprisingly clean print. Other damage includes a small amount of frame-juddering, the occasional fade and a slightly high level of contrast during some bright, daylight sequences. But, I'm really only being picky here. You have to make allowances for films of this vintage. The DVD companies are hardly going to stump up the amount of cash that they would for something like Spartacus, or Lawrence Of Arabia, for a glorious restoration of a vintage chiller, are they? And, even so, the print used here is still very watchable, indeed.

The shadows drape themselves across the image with strength, depth and distinction. Faces and detail are always clearly etched and distance shots - of the grounds around Lufford Hall, for example - are quite finely delineated. The smoke and lights of the demon's manifestation look impressive, as does the spectral forest that Holden plunges through in his desperate flight. The demon, too, benefits from a few glorious close-ups and his smoking hoof-prints are a delight. One slight problem caused by the clarity of the picture, ironically, is that you can plainly see the wire that is attached to the plane at the start and, perhaps a little more damning, the one that hauls the fluttering parchment out of Karswell's hands and then on through the train carriage during the exciting climax. Stonehenge looks beautiful in its mysterious desolation, though.

Overall, the image is possibly the best it has looked since its theatrical debut and, if this is the best print that was available, then we mustn't grumble. Well, there really isn't that much that can be said for the Dolby Digital 2.0 track supplied for Night Of The Demon. Ostensibly a stereo track, I think you would be very lucky to discern much in the way of separation. Clifton Parker's score features ominous bass, and plenty of shrill stingers, but dialogue suffers under the weight of time, this audio restoration failing to pull it out of the water. Sounding slightly harsh at times, the track still manages to avoid hiss or distortion, but at the sacrifice of consistent clarity. The rushing train sounds good though, as does the storm that Karswell summons.

Again, as with the visual transfer, much of these bad points are to be expected and it would pedantic to moan about how good a full-blown makeover would be. Unlike the previous two entries in the retro-fest - The Thing From Another World and Them! - Tourneur's suspenser would possibly sound quite bogus if any type of surround steerage had been created. The atmospherics it evokes stand up perfectly well without being sensationalised. As it stands, Night Of The Demon contains enough macabre flourish to satisfy fright-fans. Well, unless you count the addition of the shorter American cut of the film, this release contains absolutely nothing - which is a terrible shame. With such a genre-fave, and a bone fide cult classic that has heaps of scholarly material written about it, you would think that something of interest could be added. An historical commentary track, perhaps? A decent retrospective look back with some of the genre's movers and shakers that it has influenced over the years? This is very disappointing.

This release was actually sold as the American version, Curse Of The Demon, with the longer UK release touted as being the bonus feature. It's hard to believe that US audiences still view the condensed edition as being the original and the full length movie as something of a padded-out experience. The 82 min cut, whilst retaining the same narrative flow, loses atmosphere and character and is, therefore, a quite ridiculous option to have on the disc. Seriously, who is going to watch that version when they've got the real deal?

Of historical interest only.

Besides this, we also get rather drab trailers for 80's scare-flicks The Bride and Fright Night. For user information we use Bitrate 1.4 to scan the disk for the video bitrate, which also calculates the average bitrate. Below is a graph illustrating the bitrate of the disk, including the average bitrate reading. This disk averaged at 5.72 Mbps.