Night at the Museum Movie Review 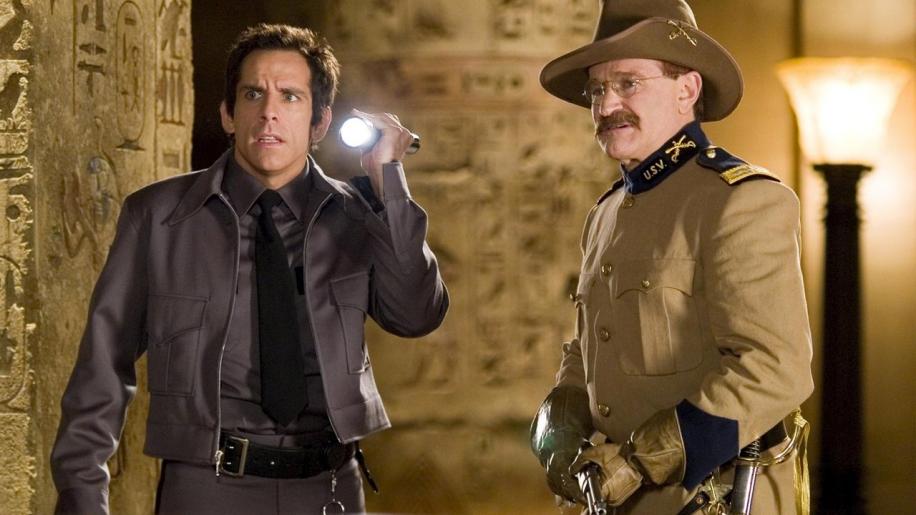 Night At The Museum was positively huge in the States, audiences there lapping up the moralistic, family-friendly adventure with typical easy-please aplomb. In the UK, the movie did pretty well too, but the critics were much harsher, finding the film curiously void of charm, laughs and, perhaps most damagingly, wonder. Well, let's see who is right. Once again, to give a film such as this its fairest treatment, I sat down to watch it with my young son so as to get the target-market's reaction as well as my own critical opinion.

“Go on, make fun of the history geek.”

Ben Stiller plays no-hoper Larry Daley, a divorced father who lives his life with his head stuffed firmly in the clouds. A confirmed under-achiever in virtually every walk of life, this weekend dad suddenly finds himself in the position where he has to get a proper paying job if he is to continue seeing his son Nick, played by Jake Cherry. So, before we can mumble the mantra of “life changing experiences to come”, Larry has taken the relatively easy-sounding and cushy position of night watchman in the city's Museum Of Natural History. Under the decidedly suspect tutelage of the three aging guards who are just about to retire - Dick Van Dyke's Cecil, Rooney's vitriolic Gus and Bills Cobbs' Reginald - Larry finds himself alone in the vast building come nightfall with the unsettling instruction not to let anything in ... or out. And with his track record of miserable failures - he seems to have been some type of inventor or something - as well as Ricky Gervais' museum boss, Dr. McPhee on his back, this appointment might just be his last chance prove himself.

“Good Lord, Lawrence - why are you slapping that monkey!”

Of course, it is giving nothing away to reveal that, due to the magical powers of an ancient Egyptian stone tablet, all the artefacts come to life between the hours from dusk till dawn, and Larry is swiftly confronted by resurrected T-Rex bones, Attila the Hun and his barbarian hordes (well, about four of them anyway), miniature cowboys led by a gurning, blank-firing Owen Wilson and equally pocket-sized Roman legionaries led by a completely miscast Steve Coogan's Octavius. Teddy Roosevelt (Robin Williams) comes to life, complete with sabre, horse and monocle and needs a helping hand to woo the Mizuo Peck's famed Indian guide, although it is more often he who seems to be helping Larry as the goof-ball night-guard struggles to maintain order in the supernaturally chaotic nocturnal world of academia-gone mad. One vital fact that he mustn't overlook is that should any of the rejuvenated characters be struck by the rays of the sun, then they will evaporate into a cloud of dust - a Gremlins-style clause that throws a little drama and pathos into the shenanigans. Throw in a totally mischievous (and eminently annoying) little Capuchin monkey to repeatedly screw things up for Larry - “the monkey in the wrench” as Die Hard's John McClane would say - and a villainous plot to steal the mystical tablet from the museum, and the film quickly embarks on a series of nightly escapades that ultimately (and, essentially, given the nature of the genre) sees Larry finding his true worth in the grand scheme of things, and emerge as possibly the best dad in the world ... with the coolest job, to boot.

“Do you want the job or not, Snack-Shack!”

The troubles with Shawn Levy's adaptation of Milan Trenc's book start pretty early on. On a comedic level the film is happy to bumble along in a slapstick vogue, but this soon becomes wearisome because the shallow obviousness of the story is too-easily permitted to rise to the surface, rendering each and every character just another common cliché. The buffoonery should, in fact, have been far greater and much, much funnier since the likes of Dyke, Rooney, Stiller and Wilson are involved but even their contributions seem misplaced and underused. Intelligent comedy, which we should have expected from Gervais and Steve Coogan is completely absent, and, Ricky, especially, comes across as little more than a bore, hugely reined-in and shackled by a script that simply takes no chances with his improvisational skills. Although, to be fair, his cut-down David Brent shtick is still very amusing - “hmm, sarcasm ... right back at you,” - if only because of Stiller's marvellously bemused reactions to his half-hearted ranting. Coogan, on the other hand, is simply terrible, Alan Partridge's voice wasting any semblance of hilarity to be found in the one-note depiction of a ridiculous Roman general.

But the main thrust of the film is, naturally, to be as colourful and fantastical as possible. The umbilical linkage to Jumanji is unavoidable, yet the sense of fun that Williams' earlier adventure conjured is strangely lacking here. Sure there are lots of wild characters running about - the snappy Easter Island Statue raises a snigger or two - but a soppy bag of bones and a mad monkey, who singularly manages to not steal the scenes he shares with Stiller despite that being exactly what the makers had obviously intended, leave a lot to be desired in the imaginative stakes. Although the museum is often full of oddities running about and re-enacting battles, the place can't help but feel curiously limited in its scope. If I tried to imagine the similar museum in Liverpool (a stone's throw away from me, folks) having the same nightly dilemma, then there would be an incredibly more varied and exotic menagerie of animal and historical life than that showcased in Shawn Levy's movie. Thus it is with the fantasy, strangely enough, that the movie makes its major slip-up. Far too quickly, the film degenerates into clumsy scenes featuring lots of people in silly costumes running amok and chasing either one another or Stiller, himself, along those slippery polished floors. A sense of proportion is lacking in that we are denied a big build-up, or a series of scenarios to successively top each other, and a severe lack of, well, creatures to stir up some suspense. I know we're not going to get aliens, monsters, or the like, in a natural history museum ... but the film seems oddly under-populated with visually amazing imagery, all the same. A few cavemen with a penchant for slurping fire-extinguisher foam, a bronze statue of an explorer that Larry just can't remember the name of and a clutch of faceless Civil War combatants just aren't enough to widen the eyes and produce a giddy intake of excited breath .

“Ohhh, you in trouble, Dum-Dum. You better run-run from Attila the Hun-hun!”

But there are plenty of enjoyable, if hackneyed, moments to enjoy. Larry's determination to conquer the historical unrest during his watch leads to him brushing up on such things in the library and arming himself with enough academic savvy to keep his charges in check. Attila had a thing for magic, apparently, so Larry seeks to use sleight of hand to save his limbs from being hacked off when doing his rounds. The Easter Island Statue wants gum-gum, so Larry will provide it with some chewie. T-Rex likes to play fetch, and there's no shortage of bones for the prehistoric doggie to chase after. A small-scale war between cowboys and Romans leads to massed battling underfoot and there is a nice shot of miniscule flaming arrows and pots of burning oil, a la Gladiator, pelting Larry when he seeks to placate Octavius' legions. Alan Silvestri provides a typically rousing and energetic score, recalling themes from his work for The Mummy Returns and even snatching in a few tones from Predator here and there. And, despite that irritating monkey, there is always the delectable presence of Carla Gugino as a tour guide and inevitable love interest for Larry, and this thesis-writing cutey is inarguably the most attractive object on display in the museum.

“Lawrence, some people are born great. Others have greatness thrust upon them ... this is that moment for you.”

Whilst this may be a big-scale production, I was still surprised at how poor some of the effects-work turned out to be. The CG lions may look very authentic, right down to the last whisker, but they still look totally like CG lions. The small people, Wilson and Coogan, look terrible to my eyes, especially when Larry picks them up. And the final chase through the snow in Central Park has one character appallingly seated atop a plummeting stagecoach and looking anything but convincing. But, then again, Night At The Museum doesn't appear to have much concern for those in the audience above the age of nine, so things such as unrealistic interaction between that which is real and that which has been created on a computer don't really come into play. However, a nice touch is the camera sweep that shows Roosevelt, the live Robin Williams version, changing back into the lifeless waxwork again after a hard night's partying - a brief instance of genuine magic in a film that trades such a currency in for a mostly counterfeit substitute.

Well, whilst my attention may have periodically wandered, my son's was happily riveted to the mayhem in the museum. The simple story was more than adequate for him to glean some worth from, the message crystal clear and suitably heart-warming, but he clearly enjoyed the frenetic, though repetitive, action that kept the movie bouncing along. The Toy Story element of having lots of model soldiers and cowboys and train-sets coming to life proved to be a winning ingredient, and I know that he wants to watch it again (in fact, by the time you read this, he'll probably have seen it so often that he's sick of it) so that is recommendation enough for those of you with small people in the house. Therefore, Night At The Museum, despite some reservations of my own, gets an overall thumbs-up. Light, breezy and cheerful, the colourful antics may be pure farce but there are enough of them to keep a smile on the face of those with an undemanding nature. It gets a 6 out of 10 from me, but feel free to add a couple on for the kiddies.