Night at the Museum: Battle of the Smithsonian Movie Review 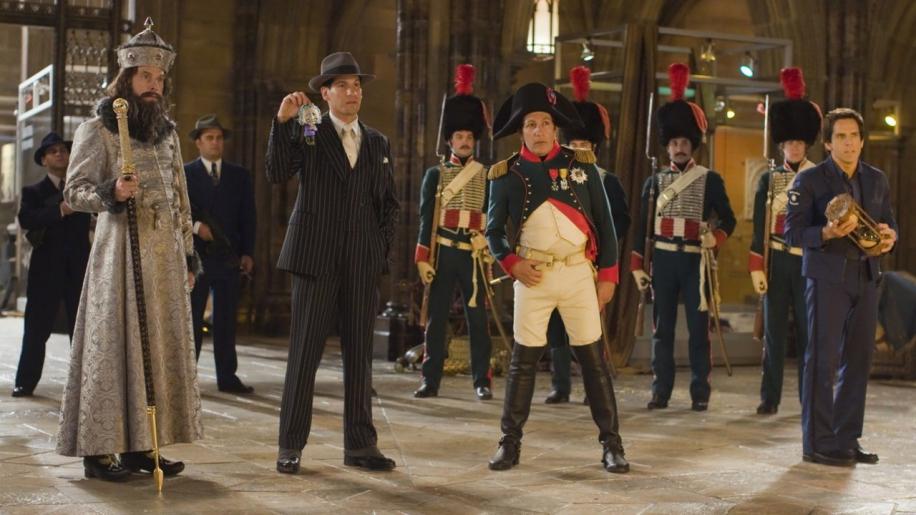 Night at the Museum: Battle of the Smithsonian Movie (2009)

Unlike many other people, it seems, I enjoyed the original 'Night at the Museum' as it was a good, fun picture that posed the premise of what would happen if all the exhibits in a Museum came alive at night. Okay we had to put up with the single parent trying to win back custody of his son routine, but once we'd got past the 'real life serious' link, the fun began. The movie overcame the attempt to be educational about American history, which usually sucks all the entertainment out of a film, and provided enough laughs to make the viewing worthwhile. For me, the added value came in appearances by Dick van Dyke (Well stroik a loit, it's Mare-ree Poppins) and Mickey Rooney.

Well so much for the first picture, but what about the sequel 'The Battle for the Smithsonian.' I was pleased to have the chance to review this movie despite the usual moans from people that it was not as good as the original. I like to keep an open mind on such things.
This time round, former Natural History Museum Security Guard Larry Daley (Ben Stiller) has made it big with inventions and the movie opens with him doing a TV spot along with George Foreman, promoting - in a send up of infomercials - a glow in the dark flashlight.
We see that Larry is getting on well with his son, but it's not long before we learn that the American Museum of Natural History is being closed for renovations and all the exhibits are being moved over to the Smithsonian. Well, not all of them, just some - but Teddy Roosevelt (Robin Williams) is keeping it quiet as it means some won't be coming alive at night any more as they'll be too far away from the tablet of Ahkmenrah (remember?).
Larry receives a panic phone call from his little plastic cowboy buddy, Jedediah (Owen Wilson), to tell him that the cheeky Capuchin monkey, Dexter, has taken the tablet with them to the Smithsonian and now all their exhibits are coming alive. Oh quelle surprise! - never a dull moment! Okay, so how did he get the number and how did a 2 inch toy cowboy dial it? Ah, who cares - it's a fantasy.

Principal among the problems facing Jed & Roman Centurion Octavius (Steve Coogan) is that a rather fey Pharoah Kahmunrah (Hank Azaria), older brother of the good Pharoah Ahkmenrah in the last movie, has awoken and wants to take over the world. Now, isn't that just like a Pharoah?
Naturally Larry immediately abandons his kid and races to their side where he's aided by a feisty Amelia Earhart (Amy Adams from 'Enchanted' in a tight fitting pair of flying britches). Indeed, Ms Adams shapely posterior helped maintain my interest throughout the more talky scenes in the movie, where it would otherwise have flagged.
So there's a lot of running around in the museum, with Larry and Ms Earhart trying to evade capture by the evil Kahmunrah's buddies Al Capone, Ivan the Terrible and Napoleon Bonaparte - who's rather sensitive to heightist jokes.
Interestingly, Al Capone is a black & white character amid all the full colour surroundings and there's also a nice scene where Larry and Amelia step into a black and white picture of VJ Day in Times Square. Be sure to watch the end title sequence for the pay off of the scene where Larry hands his Blackberry to a sailor in the picture.
You'll notice that I'm not really trying to relate much more of the plot here - basically because there isn't one - but there's enough action going on among the CGI work to entertain children and for the Dads there's always Ms Adams' derriere.

Highlights of the movie for me are when Abe Lincoln's statue comes alive and starts marching around the museum, as well as the visit to the National Air & Space Museum where rocket motors fire up for a launch. The sequence where Amelia flies the Wright Brothers aeroplane through the exhibition halls is quite good fun too.
Ben Stiller acquits himself admirably as the affable hero, who dons the security guard uniform once again to try to save mankind from the power mad (though quite funny) Kahmunrah - who really steals the picture as the Boris Karloff style Pharoah with a lisp.

Let's face it, this is a kid's picture and it doesn't pretend to be anything more but it is great fun and there's a general good humour in the script. It's not a biting satire and there are no multi-layered themes, so let's just enjoy the spectacle of the re-animated characters. The only message it tries to impart is that in life you should always do the things you love with the people you love.

Ricky Gervais reprises his role as the Manager of the Museum of Natural History, but there's little for him to do that allows him to show off his particular brand of humour.
All the same, I'm sure his couple of days work on the picture put a smile on his Bank Manager's face.
Unlike many new comedies, the script isn't so dire as to be embarassing or an insult to the intelligence. What makes it work is the quality of the CGI and Ben Stiller's bemused performance throughout with Hank Azaria stealing every scene he's in. Oh - and did I mention Ms Adams' gorgeous rear end?

So overall, this is chewing gum for the brain. It's amusing, though seldom laugh out loud funny and maybe a bit bland. Don't set out with your expectations too high and you'll be pleasantly surprised. It's really not that bad a movie.