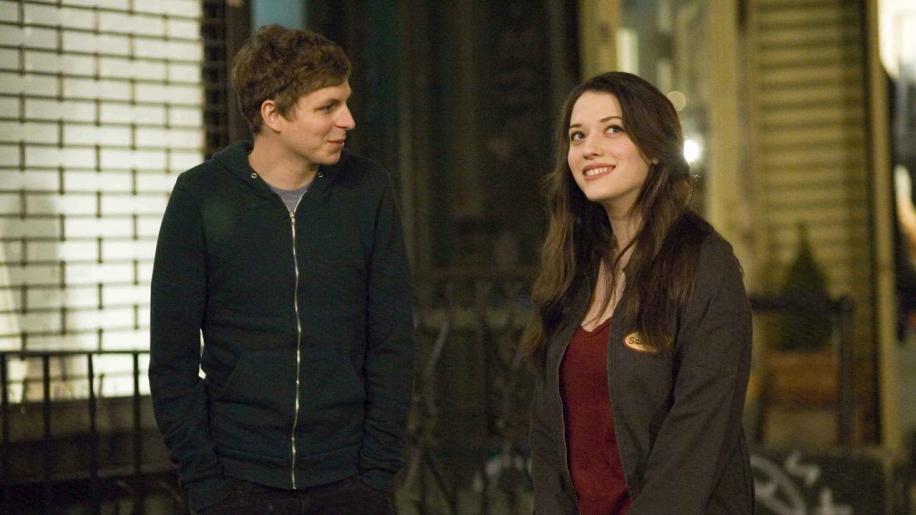 The Judd Apatow phenomenon has had an exponential impact on modern comedies over the last few years. Although, technically he has only done two movies - 40 Year Old Virgin and Knocked Upon (I'm eagerly awaiting his latest, Funny People, with Adam Sandler) - his contributions can be evidenced across everything from the excellent Superbad to the hilarious You Don't Mess with the Zohan. Some of the movies that Apatow (usually paired with Seth Rogen, who both contributes to the dialogue and takes a significant role himself) has been a part of have been less 'superbad' than others however, and I had less love for the likes of Pineapple Express and Drillbit Taylor than his official hands-on productions. They all tend to have some common features though - normally a cast of familiar faces who all appear to come from the same modern comedic acting pool, and that new generation comedic (typically Apatow/Rogen) wit, complete with plenty of biting sarcasm, and also a heavy load of pop culture references. Nick and Norah's Infinite Playlist is a distant cousin on the Apatow/Rogen film family tree, basically taking some characters (and also actors) you might have found in movies like Superbad and putting them in a more traditional romantic comedy scenario.

Nick has just split up with his high maintenance high school sweetheart Tris. After spending a month mostly sulking at home, recording numerous 'break-up' and 'closure' cds and leaving several strained voicemail messages, he is persuaded by his mates to help him play at a gig. Unbeknownst to him, Tris is also attending his band's show, along with her flimsy new fella/slave. She has been binning his thoughtfully conceived and meticulously crafted cds for the last few months (even back when they were together, as well as cheating on him) and takes every opportunity she can to belittle him. Norah, on the other hand, has been secretly collecting the binned cds and revelling in the genius behind their construction, despite never actually having met their maker. Also at the gig, a chance encounter sees her kiss Nick, right in front of Tris, and so spark off a chain of events that involving the trio (and the trio band members) roaming the streets of New York, getting to confused, losing and finding each other, and getting to know one another, all the while desperate to find the elusive band “Fluffy” who are playing an exclusive set that very night.

Nick and Norah is a sweet romance for the new generation, basically about two lonely souls who have only experienced unhealthy relationships and who come together through a mutual love of music and through finding themselves on a similar wavelength. Populated with some smart, witty dialogue, some quirky - at times gross-out - sequences, and a few romantic moments which, whilst sweet, avoid becoming sickly sweet, the situations this disparate group of individuals get themselves into will likely prove remarkably familiar to anybody who can remember the complicated path of young love and new relationships.

At the centre of this romantic comedy drama for the modern generation we have two upcoming young comedy stars - Superbad's Michael Cena and 40 Year Old Virgin's Kat Dennings. Whilst they are both engaging to watch, Dennings playing a slightly more endearing - if less true-to-life - variation on Ellen Page's Juno and Cena appearing to just be himself (or at least the same character he played in both Superbad and Juno - and possibly even in the upcoming Year One), I'm not sure I saw much chemistry between these two. Sure, they clearly share a strong fondness for the same music, and appear to be at ease with one another, but they appear to be more together because they have both been with clearly inappropriate partners before than because they are actually meant to be together. Perhaps it does not help that Cena's aloof stereotype (as in Superbad) is almost impossible to see as having chemistry with anyone. Sure he's funny and endearing in a comedy, but (unlike his partner in crime in Superbad, Jonah Hill) he fails to evoke any kind of spark in his romantic interplays.

Amidst the other familiar faces (the Apatow extended family, for want of a better term) we get Jay Baruchel (one of the Tropic Thunder team, also in Knocked Up) as Norah's flaky on-off boyfriend Tal and Kevin Corrigan (one of the hapless hitmen from Pineapple Express, also in Superbad) in an all-but 'speechless' cameo. Relative newcomers include Ari Graynor as Norah's ludicrously drunk best friend (surely we all know a friend who gets this shamelessly drunk?!), Alexis Dziena as the pretentious bitchy ex Tris (you may remember her form from Bill Murray's Broken Flowers, where she plays the aptly named Lolita) and a trio of young male actors who embody the band members and gay friends of Nick, Aaron Yoo, Rafi Gavron and Jonathan Wright. Although I've heard much praise of the depiction of gay people with these characters in this movie, I'm not entirely sure this trio's over-the-top performance is really all that realistic, even if it is arguably quite complimentary.

Nick and Norah may not be weighty stuff like Juno, or consistently hilarious like Superbad, but it is quite a sweet little romance, with just enough humour an modern wit to prove entertaining for the most part. Whilst well constructed, it is not perfectly executed, with performances and some scenes that don't quite ring true, but an overall concept that works, and plenty of situations that will seem familiar to those who have been in similar predicaments. It will certainly appeal to fans of other Apatow-related works who want something a little more romantically orientated, and whilst it is nothing particularly substantial, it is still a perfectly entertaining date movie.