One boy's quest to change his life back 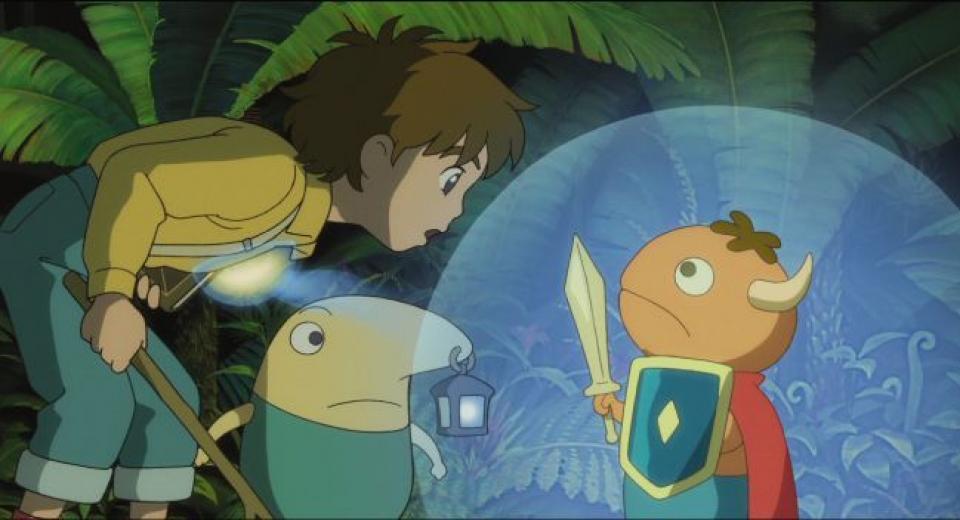 There’s a horrible trend within games these days and that is to make them as realistic as possible which is all well and good but in the process, many become far too serious for their own good. As a result there are very few games out there anymore that want to make us happy, give us characters we actually relate to and ones that can genuinely make us empathise with those on screen.

It is with great surprise and a genuine expression of joy that my head turns to the East in order to find the latest rarity to do all of the things mentioned above. We usually associate Japanese titles as being a bit crazy and off-the-wall but Level 5 have pumped their latest game with pure emotion and a sense of all things sombre.

Ni No Kuni has been somewhat of a craze since it was released with many gamers nationwide not being able to get their hands on the illusive disc. From the creators of the popular Professor Layton series comes their latest hand-drawn product, a Role Playing Game set within a fictional Western civilisation.

Ni No Kuni follows the story of Oliver, your typical happy-go-lucky kid who is the perfect model for what every child should be like; polite, well-spoken and completely lovable. Living in the peaceful Motorville with his mother, it’s not too long before things come to an abrupt end and Oliver finds himself on the receiving end of a terrible tragedy. This being the first instant where Ni No Kuni slaps you in the face with its emotive nature and boy will it hit you. The premise of the game is fairly predictable with a pre-teen boy finding himself entangled in all things magic and mysterious but the way in which the story unravels itself and how the story is written puts all other comparisons to bed. This game is simply in a league of its own, nothing like this has ever been done before. It’s not long before young Ollie finds himself hopping between his own world and the world of Ni No Kuni after his cherished stuffed toy springs to life, claiming to be a fairy. There is a unique twist to the world skipping as each is subtly linked whereby inhabitants in one world will also live in the world of Ni No Kuni or vice versa. The trick is that they will be someone completely different in each for instance a nosy young teen in Motorville is the daughter of a powerful sage in Ni No Kuni.

As a result, it transpires that Ollie has the chance to undo what has happened within his world by helping out his toy-turned-fairy Mr Drippy with the problems that are occurring in Ni No Kuni. Naturally, it turns out that things aren’t as simple as that and as such you embark on what truly will be one of the (if not the) biggest and most epic quests of the year.

Where Level 5 truly excel is in their ability to produce games that look absolutely fantastic despite being drawn from the ground up throughout the entirety of their games. Where they differentiate themselves from the companies out there who are jumping onto the ‘cel-shading train’ that is quickly running out of steam however is through their dedication to detail. No matter whether it’s a cutscene or a playable section, Level 5 always provide backdrops and environments that are vibrant, full of life and ram packed with detail. To that end Ni No Kuni delivers with its vivid colour palette, towns and cities that are full of interactive citizens and environments that truly bring the world to life. Parts of this game genuinely look like they could be excerpts from an anime movie they really are that good and I doubt that it will get the credit it deserves for being as such.

It’s no surprise really that this is the case as Studio Ghibli have been sharing development duties and their influence throughout is impossible to miss. Previously they have worked on animated films since 1986 and have built quite a name for themselves in the animation world. Complementing the extraordinary visuals perfectly is the audio which is equally satisfying. Not only is the backing music the best fitting and effective you will find out there but the voice acting and effects are so well done it’s hard to believe you’re playing a game at times. The way the characters bounce off one another with their speech is great and the actors themselves do an amazing job. Unquestionably the best performance comes from Mr Drippy who is a witty little Welsh wonder and is easily one of the best supporting acts you will find in any game, on par with Wheatley from Portal 2.

There is one thing that Ni No Kuni definitely isn’t and that is rushed. By god you could be playing this one for months if you don’t have much time on your hands to play games these days. The amazing thing is that you never feel like you’re dawdling or meandering aimlessly no matter the task you have set out to complete. This is a massive testament to Level 5 who have managed to make you cherish every single moment of Ni No Kuni and haven’t filled it with aimless side quests or wasted sequences. Sure you could say that most additional quests boil down to fetch quests but the reward for completing them is what makes them worthwhile.

Where Ni No Kuni is unique in its art style, it is also unique in its battle system which is deep, rewarding but at the same time equally frustrating at times. Each battle is active but still follows the RPG turn-taking formula but allows you to move around the battlefield. You can take control of Oliver to engage in battles with creatures from around the world or you can control one of your companions or familiars.

The sometimes frustrating element is that attacks are timed and you must wait to attack with the same one again for a short period of time. The problem being that the enemy always seems to get you when you can’t attack them which can leave your HP dwindling sometimes. Also, after cancelling an attack or selection the cursor flicks back to the default attack button which can leave you at sea when in a hurry to choose your method of assault. Companions join you on your quest periodically as you travel across Ni No Kuni to complete your tasks and objectives. Similarly, you can control the familiars which they have with them at any one time. Familiars are creatures which populate the exploration sections of Ni No Kuni and can be tamed later on in the game should you wish to do so. It’s much like Final Fantasy got together with Pokemon after a crazy Friday night and had a lovechild which turned out to be Ni No Kuni. The Final Fantasy part being how your characters can do the fighting and the Pokemon side coming into play when you send your familiars out to do your bidding.

Both you and your familiar share the same health (HP) and magic (MP) which keeps things spicy throughout combat and makes you constantly use different tactics to take down each enemy as and when they come at you. There’s a nice block and counter system within the combat which spews HP and MP orbs at you should you block or counter an attack correctly which eases pressure on you should you or your familiar be low on health.

Hostile creatures appear on screen throughout the open world sections meaning you can see where any possible battles may occur in each. The good thing here is that should your level be high enough to deter them, they won’t attack you resulting in the avoidance of any time wasting battles. You can also gain the upper hand by approaching them from behind whilst the same can be said for them too should you not be paying close attention to their movements.

Your familiars need looking after no matter how you acquire them much like Pokemon. They can be fed to level them up and increase their attributes whilst their equipment can be upgraded and interchanged to suit upcoming battles. They can also evolve once they reach a certain level which gives you an enticing/hard proposition; level them up and increase their potential (taking them back down to level 1) or hold off their evolution and keep their current power level.

Going back to the side quests dotted throughout each town or city you visit, despite their ‘fetch quest’ appearance your missions have an interesting take on them more often than not. This twist is saving or restoring their ‘hearts’ which is a similar sort of thing to Kingdom Hearts whereby people’s hearts were taken over. Here though, they can be restored by borrowing elements of another person’s heart and giving it to the one who has lost theirs.

For instance, a certain inhabitant may be down on enthusiasm or generosity. The cure? Go and borrow some from an individual who has some in abundance and give it to those who do not. It kind of gives a literal meaning to the song jar of hearts but in a good way as you’re helping people out rather than taking them and doing a runner with them. You don’t always realise who is in need of this help immediately so keeping hold of some of the heart from those who are willing to give it out is always recommended.

Considering how all these elements appear to be massively different on paper, it’s quite brilliant how well they fit together to make one amazing concept and a satisfying game all round. The changes of setting and pace keep things varied at all times and, despite the game being immensely expansive and long, the pace at which you complete it varies depending on how you choose to play.

Of course, this game will appeal to the RPG crowd the most, particularly those who like their Japanese role players, but it’s surprising how captivating this game is. I like to play RPGs casually but I have never found one like this which holds your attention for what seems like ages at a time, yet you have only played an hour or one that makes you come back time and time again.

No matter how much you write about Ni No Kuni, you could never do it enough justice and you have to experience it to understand what all the fuss is about. The first few hours are just as enjoyable as the preceding ones and it could take you an age to complete it and that is by no means a bad thing.

At the start of the year, it's not often that we're treated to gems like Ni No Kuni and it's even rarer that game of the year could have been decided so early on in the year. Sadly, it's unlikely that Ni No Kuni will get the sort of attention and reward that it deserves as it arrived so early in the year but whilst it's in the hearts and minds of gamers it should be cherished and recognised for its successes. A brilliant hand-drawn art style and a story that has been written superbly makes this one of the best role playing games out there on console.