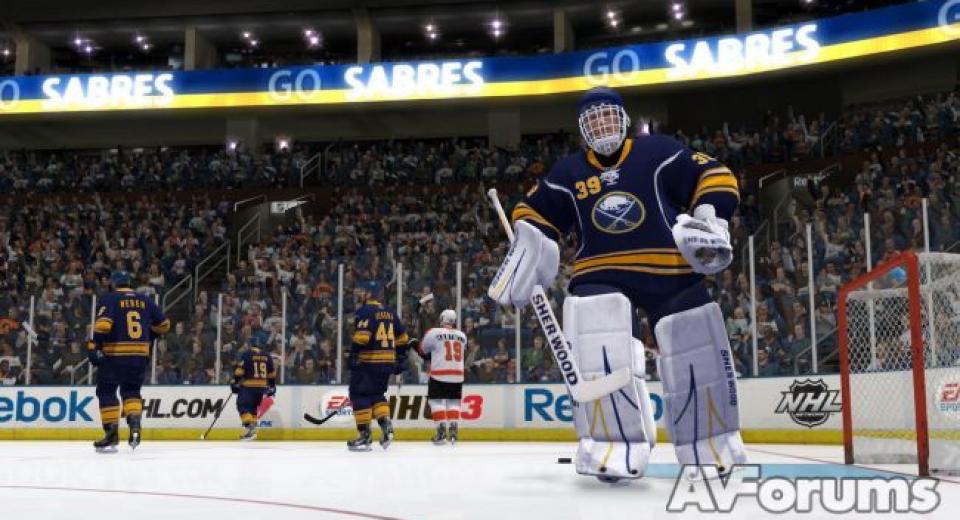 EA’s NHL franchise is another of their sports titles that banked hard on some hefty control and engine changes near the start of this console generation. As such, when we reach the heady heights of NHL 13, there’s at once a sense of familiarity to the mechanics but also one of steady and sure-footed progression. Their analogue-mapped stick controls were immediately successful and found a home with the core audience, so it’s no surprise to see EA simply build the rest of their tweaks and updates around that scheme. What we get in 13 then is another fine simulation of the sport with a few notable additions, and one that takes a leaf out of stablemate FIFA’s playbook by making physics, team AI and unpredictability the stars of the show.
In comparison to the meagre success of some sporting videogame updates, NHL 13’s new features work in tandem to improve their on-ice action from top to bottom. The changes are all about introducing a new level of realism to the equation, and it’s one that translates into a better simulation of both the team game and also the solitary ‘be a pro’ mode, which is greatly improved this year. It’s probably also worth noting at this point that - as a result - NHL 13 can be incredibly unforgiving if your knowledge of the intricacies of the sport is less than stellar (which mine undoubtedly is). But with practice there’s a valuable lesson to be learned with every mistake made, and if you stick with it, you’ll gain a good deal of confidence in a short space of time. Perhaps the most noticeable change for those of you coming over from last year however, is the introduction of something approaching ‘true’ skating physics. What that means is that players tend to react to motion as they would in a real life, dependant on their physicality and skating ability. Broadly speaking then, big defenders take time to get up to speed and have a massive turning arc in comparison to lightweight and nimble wingers, whilst goal-scoring centres take a little from both camps, able to take a hit or two in the center of the ice and hold off the presence of their foes.
In practice, those changes alone take a little time to adjust to. Where you might have taken the ability to cut in from a wide position for granted in generations past, 13 demands that you consider the physical presence of the players at your disposal. You simply cannot make the same precise turns with the more lumbering players, and there’s a huge sense of satisfaction that now stems from recognising your speedy winger has the momentum and inertia to carry him past an opponent that won’t be able to turn and catch up in time. Crucially, it all just feels ‘right’ and translates to a dramatic ebb and flow during open games. In order to best harness that new-found sense of one-on-one isolation and explosive pace, NHL’s AI routines appear to have been given somewhat of an overhaul, to the point that my lowly tactical ability was rendered inert. You’ll need to think about your attacking options rather than barreling forward and hoping for the best this year, actively scanning for players about to enter open space or screen the goaltender, and do your best to work the puck to them or capitalise as quickly as possible. When it all comes together it’s an utterly satisfying simulation, but as with all hardcore sports videogames, you’ll need to be prepared to lose a fair bit of your sanity unless you’re willing to enter tactical menus and try and best suit your team to the opposition they face.
The great thing about ice hockey however is that the action is so constrained and the tactics so straightforward with only five players at your disposal, that if you’re even vaguely interested in learning the ropes you’ll be able to do so. NHL 13’s formation sliders and tweaks all come with a quick animated diagram as to where your players need to be for any given attacking or defensive option, and be a pro mode works as a wonderful teaching aid in that regard. Picking a solitary player position and running through a few games will give you invaluable feedback as to exactly what each role is on the rink, so there are plenty of options there to get stuck into the details if you wish.
Once you’re up to speed with the basics or the suite of changes and tweaks, the rest of NHL 13 takes shape as a mish-mash of features and ideas already seen in other EA Sports titles. Ultimate Team mode is exactly as you might imagine it to be, tasking players with spending ‘hockey pucks’ to build their dream team from selections of bronze, silver and gold packs. Those pucks can be won by playing games in that same mode or delving into any of the ‘NHL Moments’ on offer, which follow their FIFA inspiration by setting you up with scenarios to conquer based on real-life encounters and happenings from the current season and last year’s campaign, as well as a few choice cuts from the annals of hockey history. The Be a GM mode is likely where the NHL enthusiasts will end up of course, and it’s joined this year by an online variant of the same mode, allowing up to 25 players per franchise to take the reins in a single league. The offline variant has been beefed up with considerably more adept AI concerning trades and deals that shouldn’t ever go through, whilst the online mode is unfortunately plagued with one of the slowest and most cumbersome UIs you’re likely to encounter this year. Needless to say there’s a lot of potential there if you can get a group of like-minded managers together and hammer through a simmed-season, but the interface proved so sluggish as to quickly direct my attention elsewhere during testing.
The other, standard, online modes play out pretty much as you’d expect, but it’s also worth noting that there was a degree of lag in everything I tried - Online Shootout mode being the only exception. Even with that lag however, playing as an individual pro is as joyful as can be expected, with little in the way of players on individual glory pursuits that sometimes ruin the likes of FIFA’s online pro modes. Despite those advantages, NHL 13 isn’t quite as smooth as the likes of FIFA however, but there have been strides made here to at least get a little closer.

There are, of course, caveats that come along with any NHL game. It’s not a sport for everybody, and NHL 13 can be frustrating as hell when things are going wrong and the opposition goaltender is making your life difficult (they have independant limb movement this year, so able to make some spectacular saves). What lies beneath that veneer is a fantastically rewarding simulation however, and one that keeps growing in a subtle but well-implemented manner every year. Be a Pro mode again shines the best, but there’s a huge amount of content here to delve into. If you’ve got the inclination and you're a sports enthusiast, you really should give it a try.