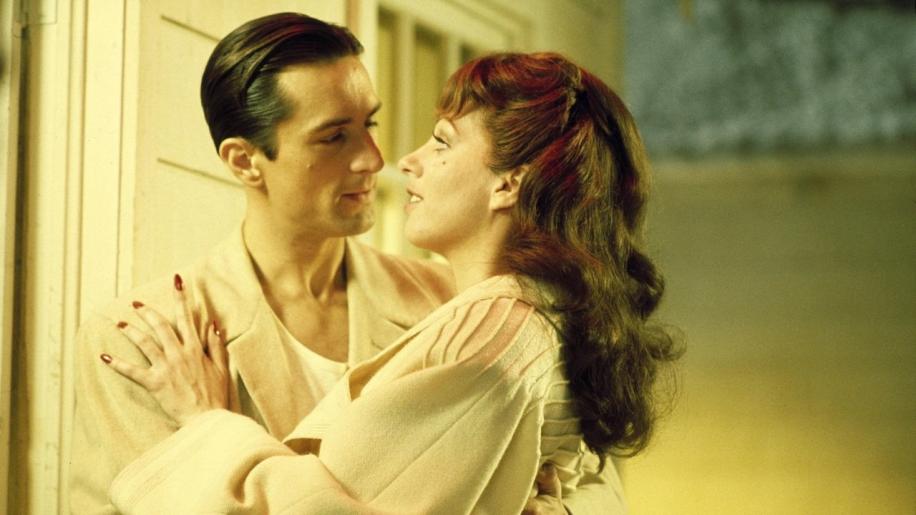 I’ve been a fan of big Hollywood musicals for as long as I can remember and when Martin Scorsese announced he was going to make ‘New York, New York’ in the mid 1970’s I was keen to see it. A musical drama set just after the Second World War starring Robert DeNiro and Liza Minnelli seemed like a great idea but something at the back of my mind queried the choice of DeNiro since he was then being hailed as a great actor. I had no trouble with Liza Minnelli in a musical as I knew she could sing, but had doubts about her acting ability although she seemed to have inherited most of her mother Judy Garland’s talent. The movie was released in 1977 and I missed it on its week long engagement at the local Cinema and I spent the next 33 years missing every TV screening thereafter. Now, thanks to its release on American Region free Blu-ray I’ve finally had the chance to catch up with it.

You know the old saying that goes ‘It is better to travel hopefully than to have arrived’? Well, that’s pretty much how I feel now that I’ve at long last seen ‘New York, New York’. Kinda disappointed is an understatement. The film had everything going for it with its two big stars, a great director, one of the best cinematographers in the world (Laszlo Kovacs), a superb production designer (Boris Leven) – holy smoke, it even had the legendary Sidney Guilaroff doing Liza Minnelli’s hair. Apart from the 1940’s musical numbers, a brace of original songs were written for it by John Kander and Fred Ebb including the absolute belter of a title song that was later recorded by the great Frank Sinatra.

So with all of this in its favour, how on earth could the movie go wrong? It started out with a fairly good screenplay by Earl Rauch, but then other people got their hands on it. It was meant to be an ode to the Big Band era but then ‘ideas’ were added. Along came hotshot director Martin Scorsese with the idea of making a movie in the style of 1940’s and 50’s musicals featuring bright, colourful studio bound sets – just like the MGM extravaganzas. Then he wanted to take it a stage further. He wanted to convey realism in the acting department by getting the actors to improvise on set. Sounds like a great concept, but do the two styles go together well? Some hope, no hope and Bob Hope. It could almost be forgiven for being experimental, but there’s a time and place for experiments – and that’s not on a big budget movie.

In the opening sequence on VJ Day, Jimmy Doyle (DeNiro) attempts to chat up Francine Evans (Minnelli) at a huge celebration party. He plonks himself down at her table and tries all his best lines. All she can think of to say in reply is “No.” An actor without a script is a pitiful sight indeed. I’m not talking about DeNiro here as he’s the master of both method and improvisation. So, due to the actors having almost free reign here, we get a scene that’s devoid of wit, humour and charisma. DeNiro just comes across as annoying and Minnelli as cold. The scene has no warmth at all. Now, a good scriptwriter could have made it really sparkle.

A further example of the clash of styles is when Jimmy and Francine go outside to have a chat in the snow. Suddenly in the middle of a dramatic sequence we have cardboard trees and a painted backdrop behind them – because that’s what they used to do in the old movies. It grates and crunches like the teeth on a gearbox with no synchromesh.

This is one long movie too with a full 163 minutes running time – and it feels like it. After the first twenty minutes, I seriously considered ejecting the disc – but then Liza Minnelli sang her first song and the quality of her voice persuaded me to continue to watch the movie. The story bears many similarities to ‘Love Me or Leave Me’, the movie about torch singer Ruth Etting starring Doris Day and James Cagney. It also draws heavily on ‘A Star is Born’ which starred Liza’s Mom, Judy Garland, and the great James Mason. In ‘New York, New York’, Jimmy Doyle is the controlling saxophone player who teams up with singer Francine Evans. Unfortunately he has a built-in self destruct mechanism that causes them to lose out on lucrative deals, so Francine eventually goes her own way and pursues a successful solo performing, recording and movie career. He cannot abide having anyone tell him what to do as he is the ‘big shot’. His character is quite unsympathetic as he is just so unpleasant to Francine especially when she announces she is pregnant and in the heat of an argument he asks her if he’d told her to have the baby. Nowadays, we’d call him a prat – among other things. I just found the character totally unlikeable and there seemed to be no chemistry between the two stars on screen. If this is what was intended, then I salute the director – although I suspect otherwise.

Martin Scorsese’s desire to recreate the look of a Hollywood musical from the 40’s and 50’s included attempting to make it look as if it had been shot using the old three strip Technicolor process which had long since become obsolete by the time he came to make ‘New York, New York’. This caused a lot of work for cinematographer Laszlo Kovacs as he tried to change the characteristics of Eastmancolor neg so that colours would leap off the screen. In the end they painted the colours on, as witnessed by Liza Minnelli’s bright red lipstick and the use of strong primaries in the set designs. Initially they tried to shoot it in the 1.33:1 aspect ratio, but this caused production problems so they changed mid-way to the widescreen 1.66:1 ratio, which is what we have on the Blu-ray. More on this in the Picture quality section of this review.

So, ‘New York, New York’ was a very ambitious project for a young Scorsese and at the end of the day we have a very uneven film that fails to involve the audience with the main characters. It could also do with a good edit to remove at least 45 minutes worth of material. As it stands, it’s just too long and I found myself looking at my watch on several occasions. The saving grace of ‘New York, New York’ just has to be the amazing singing voice of Liza Minnelli who covers a wide range of 1940’s period numbers beautifully. The songs especially written for the movie aren’t particularly memorable – all, that is, except the title song, often referred to as the Theme from ‘New York, New York’. It is just such an exuberant show stopper of a number that it almost makes putting up with the rest of the movie worthwhile. This is really one for the Blu-ray collections of Scorsese completists or those who, like me, just love that high kicking title song.