The other side of the coin? 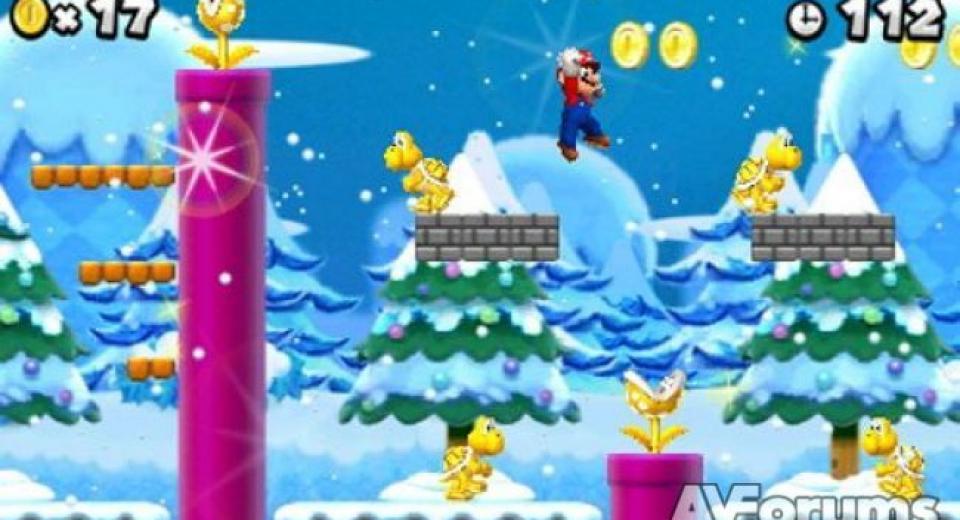 What’s a new Nintendo handheld without a proper 2D Mario game to go with it?  The moustachioed Italian and the console manufacturer are synonymous with one another, and if you wanted old-school two-dimensional platform fun on the 3DS it’s finally here, New Super Mario Bros 2.

There’s little that needs saying with regards an introduction to a Mario title, quite simply, they continue to lead the line for platform games.

The series doggedly sticks to what it is good at, incrementally adapting in minor ways and playing with a few new ideas as the technology it runs on offers new opportunities.  In their two-dimensional (in gaming terms) form, the deviation from what they once were has been subtle, tweaks and additions can’t radically alter the basic mechanics of navigating obstacles and object collection even if you’re flying in a raccoon suit. So, if the blueprint remains the same, the latest must be another stand-out title, right?  Well, there’s the rub, analysing a Mario game usually relies on flicking through a thesaurus and finding new and inventive superlatives to pour out without tripping into full fanboy mode.  Award a high score, avoid sounding sycophantic, ladle on hyperbole, job done.  New Super Mario Bros 2 requires a touch more explanation before you jump aboard the cheering bandwagon

All the staples are here, coin collection, enemies with simple attack patterns and a world full of colour as your backdrop to the jolly jaunt from left to right.  The box should give away where one of the key differences to titles of old is; the standard 3DS game gets a pretty boring white case, whereas Mario’s latest offering appears in a searing gold, evocative of the coins he’s always after.  Well Nintendo have pushed the bounty quest into the stratosphere, such is the wealth of booty you’ll be plundering levels for.  And for once it isn’t just for the sake of getting to 100 for that 1Up or boosting your ego, they’re now pushed as a key feature of the gameplay.

Presentation wise it’s all bright and gleaming, as you’d expect, the score feels like it could’ve been pepped up a bit - it’s a tad muted in places - but the 3D effect works nicely.  It’s a tempered 3D, but the use of Mario diorama-like universe, made up of parallel cardboard cut-out foreground and background layers is perfect for the simple effect. The game charts the total amount of coins collected throughout your side-scrolling journey, and even challenges you to hit one million.  You can add those you’ve gained to a global total via SpotPass as well, the key question is should you bother?  Most platform games find their hook in the flow of leaps and bounds, the navigation of the level being both the core mechanic and the pay-off.  How does a Mario title end up turning an addition, sought after for that Pavlovian response of hearing the pinging audio cues, into a pillar around which the rest of the game rests?

If you’ve not followed the development or bothered to crack open the manual (who does?) then the first taste of World 1-1 will bring with it the realisation that the ch-ching factor of golden discs collected is going to bring with it some new twists.  The first time you see Mario’s head turn into a yellow block of bling that fires out coins you’ll likely think “what the hell!???”, it looks like he’s haemoeraging your loot from his noggin, but he is in fact amassing more.  And racking up numbers is easier here than ever before, the path before you is paved with gold.

The funny thing is, if anything, this approach is the game’s biggest flaw.  You might think that those gaudily coloured discs are all you’ve been bouncing through levels after for decades now, but stop and think about it for a moment and you’ll realise they’re pretty meaningless.  No, the draw of any Mario game has always been the side-scrolling action itself, the tense split-second leaps between platforms, the last second evasion of a chain chomp hitting the end of its tether. New Super Mario Bros 2 still offers these delights, but the “fun for everyone” nature of the title is starting to look like the driving force behind the level design.  There are six main worlds to get through, and you could consider yourself a ham-fisted goon if you had trouble in either of the first four.  Each level contains three special larger Star coins, hidden away; but most are fairly easily found.  If you’re in any way versed in Mario games you’ll breeze through worlds 1-4, gaining most of the Star coins on your first attempt.

The flow of the game has slightly changed, power ups are plentiful, there’s even an invincibility that pops up without fail for those who’ve died a few times in the same place.  Everything is coin based, enemies can turn gold and leave trails to collect, the danger of imminent death is so greatly minimised in some short sections that you’ll feel happy to run at full pelt, headlong into what should be a mire of danger, safe in the knowledge a hit’ll only take away whatever power up you currently have, and with the ability to store another (accessible via the touch screen) you can follow the loot with gay abandon.  What you have is *gulp* Mario doing a Sonic impression!

Yet there is still a great game underneath this skewed drive for a “New Mario. For everyone.” and once you hit the later levels you’ll either cry “hallelujah” for the chance to test your platforming mettle a proper or lambast the often run-of-mill approach to the preceding levels.  There’s still little fear of having to go back to old levels to find 1Ups (ah those were the days) because you’ll have amassed more lives than you’ll ever need, but the level design starts to make itself known.  It feels less like an identi-kit Mario program laying down the track before you and more like a platform dungeon master seeking to test you.  As it should be. The extra features, multiple switches, numerous opportunities to gain extra coins, hidden areas all come together in the latter stages and finally combine to make a tapestry of leaps and bounds worthy of the Mario title.  It helps once you start to get to areas where one fall can mean death, no ground beneath, just sky, lava or spiked blocks.  The boss battles are still the proverbial piece of cake unfortunately (the mid-World mini-bosses are almost insultingly simple to best in seconds) but at least you’ll get that sigh of relief when you hit the doors to enter the final battle.

Once you’ve played through world’s 1-6 you’ll want to find the path to get to the other two that lie tantalisingly detailed on the map screen.  There’s also a co-op mode (local) for a friend to take charge of Luigi for a bit of two-pronged coin collecting, and finally there’s a Coin Rush mode.  This gives you one life to play through three stages from a chosen World and collect as many coins as you can in a stricter time limit and make it to the end.  Die on the third stage and you have to start all over again.  Strangely, for an additional, at-first-glance throwaway feature that’s tailored towards the coin-grabbing it actually affords some of the best thrills of the game.

New Super Mario Bros 2 is the first Mario game since the Gamecube’s Sunshine, which leaves itself open to question.  It tries to subtly divert the game towards a direction of care-free coin collection, but in doing so manages to erode much of the edge-of-the-seat thrills of hazardous side-scrolling leaps and bounds.

If you can look past the easy difficulty of the early stages though, by the time you’ve finished playing you may find that the challenge to amass a fortune has taken hold; if so, the later levels and hidden Worlds, as well as the old-school time-attack nature of the Coin rush mode should reaffirm your faith that Mario is still your go-to man for platforming.  It isn’t a resounding success, but even a flawed outing for the hirsute plumber is far better than most can muster.