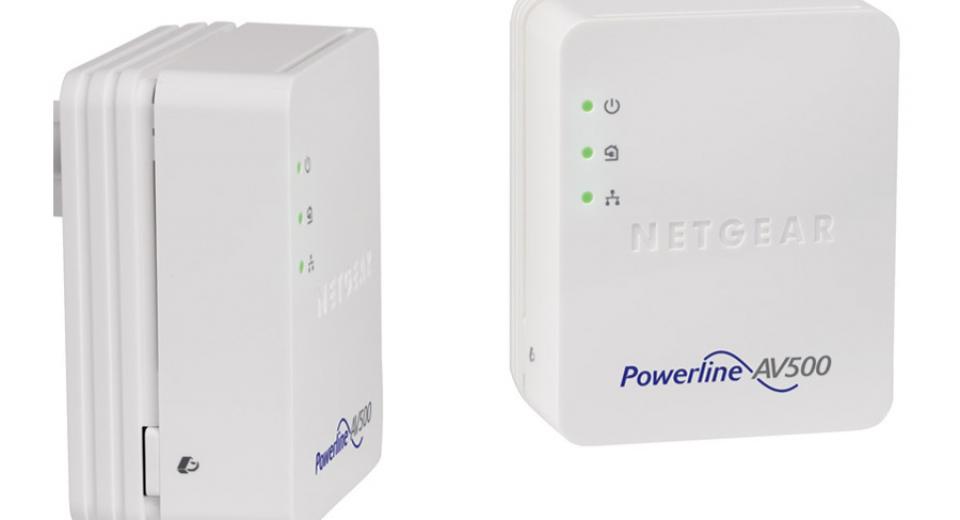 Like this reviewer, there's a good chance many of you have a copious amount of holes in the walls of your house. Why? Because you needed to get an internet or network connection to a non wireless capable device that is nowhere near your router. A Blu-ray player, for example, or an Internet Capable TV in another part of the house. Or even an upstairs PC that you want on a wired connection. Thanks to a very clever team at Cisco way back in the early days of the 21st Century we now have these fantastic devices called Homeplugs that you can just plug into an electrical outlet and instantly create Internet access and network connectivity in areas of the house that you previously thought impossible without resorting to a drill.

Several examples have already been reviewed on AVForums including the pricey but attractive looking Power Ethernet all-in-one wall sockets and the previous version of Netgear's Powerline 500 (XAVB5101). The very latest version from Netgear is the Powerline 500 (XAVB5201), which offers a twin pack of adapters with a gigabit ethernet port in each one, along with a 500 Mbps Powerline interface, HomePlug AV compatibility and two 2m ethernet cables. The specifications are very similar to the previous XAVB5101 but uses slightly smaller units and compared to the initial £80 retail price for the previous model, the new XAVB5201 can be had for less than £50. The question is, how well this new version actually perform in the real world and can it reach the speeds claimed? Let's find out.

The Powerline 500 Nano (XAVB5201) adaptors are in keeping with the previous model's style and offer the same Netgear level of build quality and feel. Made from hard white plastic and clearly fitting the Nano name, these little adaptors are barely larger than a standard plug and as such will fit without obstruction on a standard double wall plug or 4 way socket extension. At the bottom we have the small pin hole for performing a factory reset and the single Gigabit Ethernet port, whilst on the left hand side is the security button for enabling the 128-bit encryption. At the top and bottom we have slots for ventilation, as these units do get slightly warm after extensive use, although not to any levels that should cause concern. At the front of the adaptor we have three LED indicator lights - Power LED, Powerline LED and Ethernet LED. The first will light up green when connected to the power and in power saving mode, where it uses less than 0.5 Watts, it will light up amber. The second light will come on once the adaptor is connected to the Powerline network and this is where Netgear's Pick-a-Plug feature comes in very handy. It allows you to pick the electrical outlet with the strongest link rate, which is indicated by the Powerline LED being either Green, Amber or Red. Green indicates the best link, with a speed of over 80Mbps, followed by Amber with 50-80Mbps and then Red with under 50Mbps. This is an excellent feature, giving you an instant indication of where best to place the adaptors for optimal use. The final light is the Ethernet LED and it comes on when the adapter is connected via the Ethernet port to a powered-on device.

These Powerline 500 adaptors certainly live up to Netgear's Plug-and-Play promise. Literally within about 30 seconds or so of plugging each unit in, you can be up and running with a fully connected network. The first adaptor needs to be connected in the same location as your router and the second in the room nearest your device. Then just press the security button for 2 seconds on the first, run like crazy (well walk really, as you have up to 2 minutes) to the second device and press the button on that one for 2 seconds. Once the Power LED has stopped flashing, you will have enabled the 128-bit encryption and your new Powerline network will be fully secured. Adding a third or more Powerline adaptors is also a piece of cake as you just plug them in, press the security button and away you go! The Nano 500 adaptors are also fully compatible with Homeplug AV and previous Netgear Powerline AV products. It's worth mentioning that there were only two available for review, so we can't verify how the network performs with a third or more homeplugs connected.

Finding the best socket near your chosen device is probably the most thought you will have to put into setting up these adapters; it really couldn't be any simpler. In the package you also get two 2m Ethernet cables for connecting to your router and your chosen device, but should you require longer runs then clearly you can buy additional cables. That's all you need to do and your Powerline network is now fully setup and working. Gone are your days of ruining perfectly good walls to run cables to your non-wireless network devices!

Firstly with the performance it should be noted that the quoted 500 Mbps speed combines both the uplink and downlink speeds, so theoretically the maximum you should be able to get is 250 Mbps. As the Pick-a-Plug feature claims the best link rate to be greater than 80 Mbps, it would indicate that speeds of 250 Mbps are not really achievable in real world use. However, under testing the results were impressive. Using DUMeter software we can see that when downloading 1GB and above test files from the internet, the full speed available from our internet connection was achieved and no dropouts or failures were encountered. Clearly 42 Mbps is well within the capabilities of this device, but it is still good to see that it performs as promised here.

Now onto streaming and going by the results of the file downloads and the speeds received, no issues were expected here and none were found. BBC iPlayer HD started playing immediately and suffered no freezes; the DU Meter image below shows the level of about 3-4 Mbps that the BBC iPlayer HD seemed to require. Onto HD Netflix where we see that the Homeplugs coped well here and after the initial peak of 30 Mbps caching (with the film immediately playing) it continued at about 3 Mbps and like iPlayer suffered no stuttering or freezes.


Finally onto the file transfer testing. This should be where we would expect to see speeds well in excess of the pure download tests above. Using DU Meter again we can see a downlink peak speed of 78.4 Mbps and an uplink peak speed of 80.9 Mbps. Slightly disappointing as it is nowhere near the quoted 250 Mbps although 80 Mbps is more than enough to quickly transfer files. For example a 1GB file transferred to the host device in 2 minutes 21 seconds and from that same device in 2 minutes 9 seconds at roughly an average speed of 70 Mbps. Transferring 10 x 20MB files to the host device took just 20 seconds and from that device took 26 seconds with a slightly better speed in the range of 70-77 Mbps.

The main testing was done in a room upstairs from the router and various connection speeds were all within 70-80 Mbps for file transfer. Other speeds in various locations around the house were ranged from a maximum of 98.2 Mbps with the two Homeplugs connected right next to each other down to about 40 Mbps in the furthest part of the house from the router. We also noticed reductions of up to 10% in the speeds when using a high power device in an adjacent socket, such as a toaster for example, although still giving a stable connection, allowing you to transfer that important file whilst getting your breakfast ready! Netgear do say the range can cover a home of up to 5000 square feet, sadly we don't live in a mansion so could only test in a standard 4 bedroom house.

The final point to mention is a free program available from Netgear's website called the Powerline Utility software. It can be run from any PC on the network regardless of whether it is directly connected to a Homeplug and gives a visual display of the Homeplug network and showing the current Uplink and Downlink connection speeds. It also allows you to rename each device should you have several Homeplugs, along with turning the LED lights off on a particular Homeplug (although that does appear to disable the device as well) and changing the security key if you wish. The Netgear Powerline 500 (XAVB5201) works so well, it's almost too good to be true, offering an incredibly simple way of creating a wired network. No installation of software is required, nor any time consuming configuration of settings, you just simply plug one device into an outlet near your router, then the other in a room of your choosing, a quick press of the security button on both devices which enables the 128-bit encryption and away you go. This easy process results in connectivity in areas of the house you previously thought impractical without some very long cable runs and the occasional hole drilled into your walls.

It should be noted that the 500 Mbps quoted speed includes both the Uplink and Downlink speeds so, therefore, the theoretical maximum is 250 Mbps. Whilst Netgear have fitted what they claim is a Gigabit Ethernet port, you obviously won't be getting speeds anywhere near that and you probably don't need anything like that anyway. During the testing the best speeds achieved were close to 100 Mbps with the two homeplugs right next to each other in the same wall outlet and the lowest in the confines of our testing location was 40 Mbps. Even at the lowest speed achieved this is more than enough for streaming HD from the likes of Netflix. In the main test area, with a stable speed of 70+ Mbps, a 1GB file takes a little over 2 minutes to transfer.

With Netgear's Pick-A-Plug LED feature you can easily identify the ideal electrical outlet to use, with a green LED meaning a link rate of above 80 Mbps. The speeds actually realised are often below what the Pick-A-Plug feature would have you believe and the actual download or transfer rate is often very different. You can see your actual link rate via the useful free Netgear Powerline Utility software and during testing the quoted 250 Mbps speed was in actual fact nearer a speed of 70-80 Mbps. Whilst it's a shame that you can't achieve anything near 250 Mbps, the Nano 500 is still capable of very impressive and stable speeds and you most likely wouldn't need a connection that fast anyway.

The Powerline 500 is Homeplug AV compatible and also backwards compatible with all previous Netgear Powerline products, meaning adding a third or more Homeplugs to your new Powerline network is hassle free. It's compatible with Windows 8, 7, Vista, XP and Mac OS X and with a quoted coverage of up to 5,000 square feet, Netgear are literally covering all their bases. Should your electrical outlets be at a premium, Netgear also do a similar product, the XAVB5601, with a power outlet on the front for convenience.
Since the Netgear Powerline 500 (XAVB5201) can typically be picked up for under £40 it represents excellent value which, along with its superb performance, makes it a worthy winner of a Highly Recommended badge.