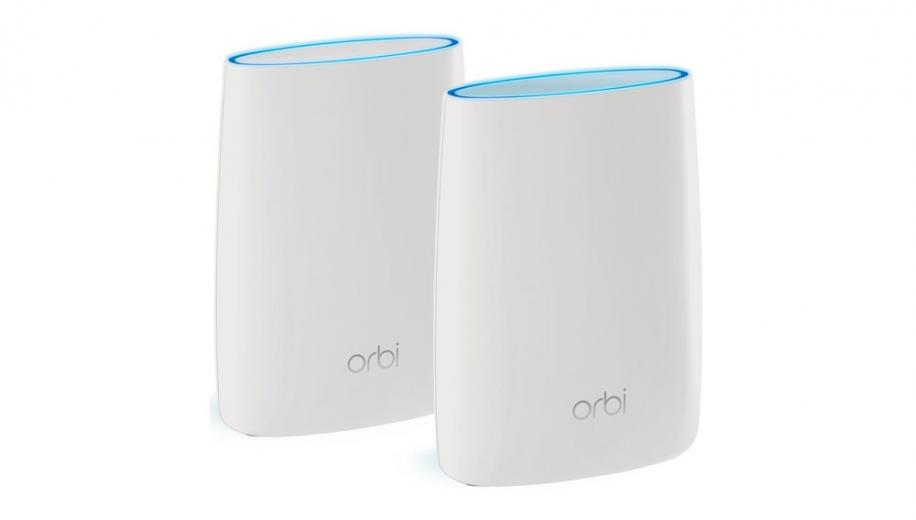 What is the Netgear Orbi Tri-band Wi-Fi System?

Wi-Fi is today’s drug of choice. One that is so addictive and so essential that, if you suddenly find you don’t have it, all hell breaks loose. Move away from the signal into a black spot and you get a cold sweat and a dread that you might actually have to talk to people and not just stare into your phone or tablet.

Fortunately for those that can’t be without Wi-Fi for one second or for those who have annoying black spots in the home, the Netgear Orbi Tri-Band Wi-Fi System is here to cure all your ills. Priced at £300 it does sound, on the face of it, to be very expensive but don’t run off just yet. The Orbi System includes a Router and a Satellite, both with simultaneous Tri-Band Wi-Fi, 4x4 Dedicated Backhaul (1.7Gbps), implicit and explicit beamforming, is MU-MIMO capable and both units feature a generous number of Gigabit Ethernet ports.

It still does sound a bit pricey doesn’t it? But read on to see how it fares in our tests and find out if it really is worth it….

Looking like a model left over from last year’s well received Sci-Fi film, Arrival, the Orbi Router and Satellite are identical in overall design and appearance. They have an all-white finish with a soft rubberised feel and have an attractive and modern look to them. One that makes them fit nicely in the modern home, especially if white is your theme. The six high performance antennas with high-powered amplifiers are all built in as well, so no unsightly antennas sticking out at all angles. The units are vertical in design and measure 226 x 170 x 79mm each with a weight of about 890g. Both the Router and Satellite feature 4 Gigabit Ethernet ports, one of which is sacrificed for a WAN port on the Router with the rest being LAN ports. Each unit also includes a USB 2.0 port which can be used with the ReadyShare feature to connect a USB printer to it, so that anyone connected to the Orbi network can use it. Unfortunately it appears not much else can utilise the USB port at this time.

Once fully setup the units do not have any lights save for the power LED on the rear of the device, which is needed sometimes as without lights anywhere else, you do wonder sometimes if it’s actually alive and kicking, but it is, so for those who have this in a bedroom, you won’t need to worry about being kept awake by sun bright LEDs all over the place. Despite networking devices getting more and more complex and being crammed full of more features than you wculd ever need or use, they are still among the easiest devices to setup. Here the Netgear Orbi continues this theme with a setup that couldn’t be easier if they tried. To install you simple connect the Router to your existing modem (it doesn’t sadly include a modem) and then turn it on. The LED ring at the top of the Router will light white, you then place the Satellite in a convenient location, in the middle of the house for example, turn that on and wait for the satellite to sync with the Router.

The Orbi Satellite’s LED ring will change from white to either Blue (Good connection), Amber (Fair connection) or Magenta (no connection). If you are unlucky enough to have Amber or Magenta, then you have been pushing your luck a bit too far with the distance from the Router and need to move the Satellite a bit closer to it. Once that’s all done, the LED ring lights on both devices will go out and that’s it. All setup and ready to go. You can then use the app or configure it via your browser should you need to tweak any settings. Whilst the browser interface is easy to use, we would have liked it to be quicker in response. The Orbi System is stocked full of features, which certainly helps to justify the hefty £300 price tag. Unlike a basic Wi-Fi extender which simply extends your current Wi-Fi to varying degrees of success and are often pretty flaky and difficult to get setup correctly, the Orbi uses a Mesh Wi-Fi network which is designed to completely replace your existing Wi-Fi network. To put it (very) simply Wi-Fi extenders can only communicate between themselves and the Router so regardless of how many you have or where you place them, they all have to communicate back to the Router.

Whereas the devices that make up a Mesh Wi-Fi network talk to each other. So you don’t need to be worried about placing them all near the router. It allows you to create a much bigger Wi-Fi network than you would have been able to achieve via Extenders alone. Top of the feature list and what makes the Orbi stand out is the 4x4 Dedicated Backhaul (1.7Gbps). Rather than the Router and Satellite stealing the bandwidth from client devices when they need to talk to each other, the Orbi System has a dedicated quad stream 5.0Ghz 1766Mbps Radio for these backhaul tasks, thus allowing for full bandwidth for any other client devices connected to the Wi-Fi network. The Orbi also features both implicit and explicit beamforming, has the option to setup a guest Wi-Fi network and includes many basic features seen on most Routers such as parental control, access control, setting up a Dynamic DNS, VPN service and port forwarding. Amazon Alexa control is also supported.

We use a program called LANSpeedTest by Totusoft which is a simple but powerful tool for measuring Local Area Network (LAN) speeds. It does this by building a file in memory, then transfers it both ways (without the effects of windows file caching) while keeping track of the time, and then does the calculations for you. This gives us the results of transferring files from our PC to the Laptop using the Orbi network.

Laptop and PC connected via Ethernet to Router and Satellite

As you can see from the results above we received excellent speeds during our tests with a maximum of 567.33Mbps. This is all purely via the wireless connection between the Router and the Satellite. Our test location is particularly harsh on Wi-Fi signals and our previous wireless struggled to cope with our broadband speed let alone anything else, so we were very impressed with the speeds received.

Is the Netgear Orbi Tri-Band Wi-Fi System worth buying?

At £300 the Orbi System is not one to be purchased lightly. For a device to provide Wi-Fi and network connectivity in the home, compared to other solutions such as Powerline Adapters and Wi-Fi Extenders it does sound like a hell of a lot of money, but the performance and features just about make it worth that outlay.

With the superb connection speeds for clients, easy installation and setup plus the impressive array of features such as the 4x4 Dedicated Backhaul providing a lighting fast Router to Satellite connection, the £300 doesn’t begin to look that bad at all.

However for a Mesh Wi-Fi system, even with the list of features and specification that the Netgear Orbi System includes, it still feels a bit over priced. There are cheaper alternatives although they don’t appear to cover all the bases that the Orbi System does, such as the Linksys Velop System currently available for £225 or BT’s ‘Whole Home Wi-Fi’ System for just £190. Given our experiences with the Orbi we are happy to award it 8 out of 10, but the high price tag just stops it from receiving our AVForums Recommended Award.