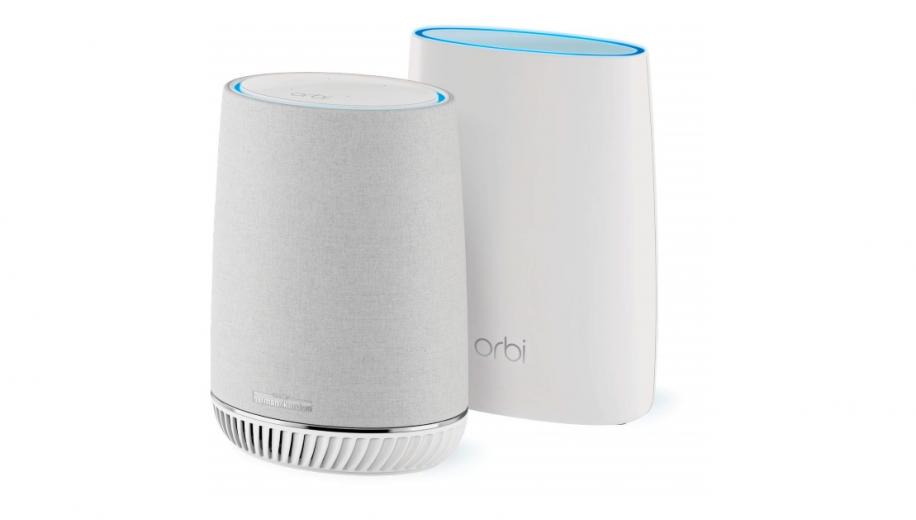 What is the Netgear Orbi Voice (RBK50V)?

The Orbi Voice is the latest in Netgear’s quest for world domination in the Mesh Wi-Fi market. Their range already includes systems to cater for all sizes of homes such as the RBK23 triple set, RBK50 dual set and the daddy of them all, the RBK53 AC3000 triple set. Netgear has now expanded this even further by combining its Mesh Wi-Fi expertise with smart speaker technology.

The Orbi Voice is a Mesh Wi-Fi system comprising of two units, similar to the rest of their Orbi range, but the 2nd unit, in this case, is an Alexa enabled smart speaker with the audio provided by Harman/Kardon. The main unit has AC3000 Tri-band Wi-Fi and four Gigabit Ethernet ports, whereas the smart speaker has AC2200 Tri-band Wi-Fi and two Gigabit Ethernet ports. Retailing for £430 this is by no means a cheap solution, but if this system continues Netgear’s solid Mesh Wi-Fi performance and includes a quality smart speaker, it may well be worth that. Read on to see how it fares…..

The Orbi Voice RBK50V set includes an RBR50 Orbi router and RBS40V Orbi Voice. The router is identical to the one in the RBK50 system we reviewed back in 2017. That being mostly white plastic with a blue oval to the top finishing off what is a modern and stylish curved design. It’s one that won’t look out of place if you must keep to a certain style in your home. The six high- performance antennas are all internal, so you won’t have that Edward Scissorhands look that a lot of the latest high- performance routers are emulating.

Weighing in at 780g and measuring 225mm high x 170mm wide and 78mm deep, it’s fairly compact compared to a lot of routers. Towards the rear of the unit, we have 4 x Gigabit Ethernet ports (of which one is for connection to your modem), a single USB 2.0 port for Netgear’s ReadyShare Printing facility and the sync, power and reset buttons. The Orbi Voice on the other hand, whilst retaining the overall Orbi shape, is of a completely different design. In keeping with a lot of smart speakers, it has a much more attractive design due to the likelihood that it will be on prominent display. The main body of the unit is wrapped in a light grey stylish cloth, with a white grille around the base. To the top is where you will find the touch-sensitive controls, which are only visible when the unit is on. As expected, due to being a speaker, this unit weighs in at a much heavier 1.8kg with dimensions of 218mm high x 164mm wide x 124mm deep. As with the router unit, the connections are all to the rear, with just two Gigabit Ethernet ports and no USB port on this one, together with the sync, power and reset buttons.

Both the router and smart speaker have a ring of light on the top which acts as a guide during setup. The light will flash white when syncing and stay either blue, amber or magenta for three minutes once set up to indicate the quality of connection (blue being the best). In addition, the smart speaker unit has further lights on the top to indicate that Alexa is functioning, the microphone is muted and a flashing yellow LED for notifications.

As we experienced with both of our previous Netgear Orbi reviews, the installation and setup is very easy. As seems to be the norm these days, it is all done via an app. The Orbi app (available on both iOS and Android) is nicely laid out, clear and easy to use with very simple to follow instructions. With the app installed you connect the router, follow the instructions, then connect the smart speaker unit and follow further simple instructions. Once the two units have synced, you then add your Amazon account to the app to enable Alexa and you are all good to go.

Whilst the installation and setup is very easy to do, the units do take a good 5 minutes or so to sync with each other. Note that you can use these devices with BT Infinity, for example, and the Orbi router would simply assign itself an IP. This is how we have it set up for the purposes of this review as we have BT Infinity.

The main screen of the app shows the status, number of connected satellites and access to the various options. The first of which is the Device Manager which shows how many devices are connected to the Orbi network and what wireless band they are using, allowing a button press to deny access to the network for a particular device. Below that is the Internet Speed which uses SpeedTest to test your speed and ping, together with keeping a history.

The next feature is Netgear Armor. Powered by Bitdefender this offers advanced cyber threat protection for your home and all your devices that are connected to the Orbi network. It includes antivirus and ransomware protection, vulnerability assessments, Bitdefender Total Security 2019 and even works when you are not connected to your local network via the Netgear Nighthawk app. Unfortunately, this service isn’t free. You do get a 30-day free trial but after that, it will cost you an annual fee of £59.99.

The last feature is the Parental Controls. Netgear has partnered with Disney here to offer the ‘Circle with Disney’ app which unlocks a new way for families to manage content and time across all devices, including setting up time limits, schedules (such as disabling internet access during meal times for example) and checking usage. As with the Netgear Armor feature, this is not free. The free basic service only includes Filter, Usage and History. If you want access to the time limits, schedules and other features it will cost you $4.99 per month.

Lastly, the Orbi network map which is accessed by simply touching the router image. Here you can see the map of Orbi devices, further options are then available such as rebooting the router, checking for firmware updates and accessing device information. With the Orbi Voice you also have an option of an EQ (Classical, Jazz, R&B, Rock and Custom), Alexa and Spotify controls and device information.

We use a program called LANSpeedTest (Ver 4.4.0) by Totusoft which is a simple but powerful tool for measuring Local Area Network (LAN) speeds. It does this by building a file in memory, then transfers it both ways (without the effects of windows file caching) while keeping track of the time, and then does the calculations for you. This gives us the results of transferring files between our PC and the laptop using the Orbi network.


The results above show good speeds from both satellites by Ethernet and wirelessly with a maximum speed of 285.24Mbps. These speeds are impressive and outperform the Wi-Fi network provided by our lone BT HomeHub and any Wi-Fi extenders that we have tried to use in the past. When is a smart speaker not very smart? When it’s the Orbi Voice. That’s not a joke, unfortunately.

Starting with the audio performance which is provided by Harman/Kardon and comprises of a 3.5” front-facing woofer and a 1” tweeter. It has a frequency response of 63Hz to 20Khz and 35W output peak power. The Orbi Voice is of a reasonable hench and coupled with the price tag of £430 you would rightly expect a very good audio performance and, for the most part, we would say it performs well. The audio is not ground-breaking by any means, but the bass is sufficiently present, vocals are crisp and clear, there are no annoying tinny sounds that you get with cheap speakers and the maximum volume level is sufficiently generous. We only noticed very slight distortion on some tracks at maximum volume level. Overall, a good performing speaker.

Moving onto the unit as a smart speaker. Sadly, it just isn’t very smart. We’ve reviewed several smart speakers here at AVForums and, usually, they have their own dedicated app from which you can play audio from many music services, quickly access playback controls and numerous other features you would expect from a smart speaker. Here, with the Orbi Voice you get none of that. There is no Orbi Voice app, just the main Orbi app which is not tailored at all to a smart speaker. The only options available in the Orbi app are to change the EQ between 4 presents and a custom setting.

When is a smart speaker not very smart? When it’s the Orbi Voice.

If you are happy with the services available and prefer voice control then you won’t have an issue with the Orbi Voice, providing you pay for all the premium audio services of course, but if you like more of a hands-on control to your audio, then you may start to get slightly annoyed at the lack of smart features on the Orbi Voice.

Currently available for around £370, the Orbi Voice RBK50V gives you a dual unit Tri-Band Mesh Wi-Fi system, of which one unit is the smart speaker. Featuring audio by Harman/Kardon, Amazon Alexa control and all backed up by Netgear’s excellent Mesh Wi-Fi performance, it seems a reasonable package for the price.

The Mesh Wi-Fi part of the package is excellent with a strong Wi-Fi signal able to reach those dark and distant parts of the house along with excellent speeds and a very easy to use app with clear details of the Orbi units. Easy integration is also included for Netgear Armor and Disney Circle parental controls, which do require a subscription to access all the features.

The audio performance is very good but it is just not backed up with any decent smart features. Yes, it has Amazon Alexa and works with Spotify for example, but it has no dedicated app which you find on almost every other smart speaker. If you aren’t happy to use voice control and want a more app-centred hands-on approach with all the music services in one place with easy access, then you will be disappointed.

As the only Mesh Wi-Fi System with a smart speaker built-in, there is no direct competition. But a dual unit from the likes of TP-LINK and BT is available for under £250. Then, for smart speakers, the options are almost endless with the likes of the new Sonos One at £190, KitSound Voice One at just £85, Amazon’s Echo Plus at £110.