Wi-Fi blackspots are now a thing of the past! 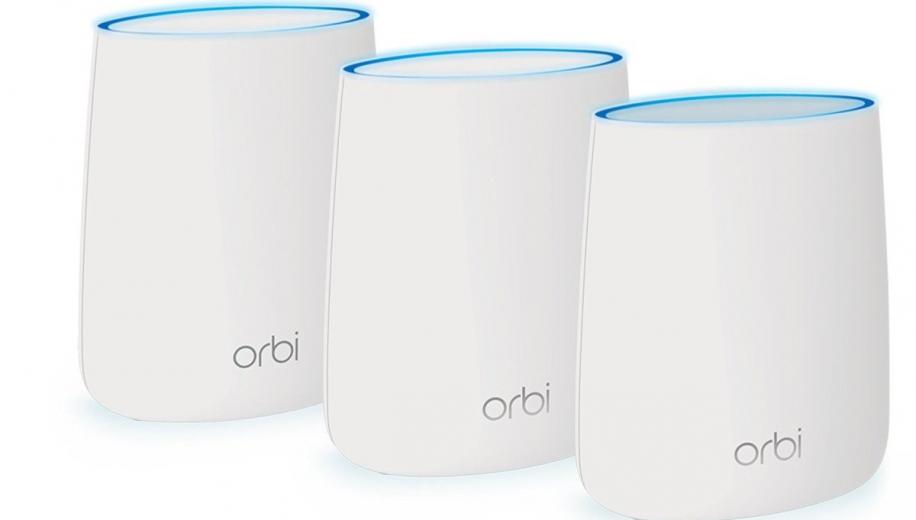 What is the Netgear Orbi RBK23 Wi-Fi System?

If you are lucky (or unlucky, as the case may be) to live in a new build home, the woes of getting Wi-Fi to every corner of the house may not be one that's familiar to you. Wireless signals penetrate easily, thanks to paper thin walls and a construction ethos that errs more on the ‘build as cheaply as possible’ method as opposed to creating a quality build. If, however, you live in either a very large house or one built over 40 years or so ago, then getting Wi-Fi through properly built thick walls can be a right pain, and often leads to numerous devices littered all over the house to try and eliminate those nasty dead zones.

Thankfully, there are now many simple solutions to this problem that don’t involve multiple different wireless networks, and devices that you hope will all live in harmony with each other. One such solution, and the subject of this review, is Netgear’s Orbi RBK23 AC2200 set. This is a set of three Orbi Tri-band Wi-Fi units, one acting as a router, the other two as satellites. These create a Mesh network that covers up to 4,500 square feet. Read on to see how it fares in our tests and whether it is worth £290?

The RBK23 system comprises of an RBR20 Router and two RBS20 Satellite units. They look very similar in design to the Orbi RBK50 set we reviewed last year but are considerably smaller and more compact. The design is as modern and attractive as one of these types of device can get, with a stylish curved look to them. The rubberised feel to the RBK50s has been replaced with a simple, white, plastic construction and the six high-performance antennas, with high-powered amplifiers, have been reduced to four. The antennas are all hidden inside the units, so you won’t have a load of unsightly stalks sprouting out all over the place. Compared to the 226 x 170 x 79mm size of the RBK50s, these RBK23 sets are just 167 x 142 x 61mm with a weight of just 476g. The reduction in size has unfortunately meant a restriction in the amount of Gigabit Ethernet ports, with the router having just one and the satellites two each. The USB ports, which were available to use for the Netgear ReadyShare feature, have also been sacrificed.

Each unit has a ring of light on the top to act as a guide during setup. This flashes in various colours to tell you when the units are connecting or when there is a disconnection issue. In normal use there will be no lights on the unit at all save for a small power LED light to the rear. Both the satellites and the router also have a sync button for use when one of the units has stopped talking to the others, plus a power button.

The installation and setup of these units is very simple, and what you would expect when you are shelling out close on £300 for them. Netgear has now introduced an easy to follow Orbi app which guides you through the setup process. Once the app is installed, you simply connect the router unit (RBR20) to your existing modem and turn it on. Note that you can use these devices with BT Infinity, for example, and the Orbi router will simply assign itself an IP. This is how we have it set up for the purposes of this review, since we have BT Infinity.

With the Orbi Router now turned on, you wait for the LED ring to turn white, then place the two satellites (RBS20) in your desired locations, turn these on and wait for them to sync with the router. The satellite ring LEDs, once connected, will flash for 10 seconds in either Blue (good connection), Amber (fair connection) or Magenta (failed to sync). Whilst this is an easy process, you do need to wait about 5 minutes for the three units to have synced to each other before the app reports everything is set up and ready to use.

You can also use the web browser setup at orbilogin.net. In our setup with the BT Homehub, the app reported it all working correctly but our PC reported a failed internet connection. We had to log in to the web browser portal, where it automatically assigned the Orbi Router a new IP and then all worked ok. The app itself is well designed and easy to follow. Once everything is set up and running, the main app screen shows you the number of satellites connected and whether the internet is online. You then have options to configure the Wi-Fi, see a list of devices connected to the Orbi system, set up a Guest Wi-Fi network and configure the parental controls. Netgear have partnered with Disney here to offer the ‘Circle with Disney’ app which unlocks a new way for families to manage content and time across all devices. The app also offers a very simple two-click solution to update the router and satellite's firmware.

The Orbi Router web interface includes many features you would expect from a normal router, such as the option to set up a guest Wi-Fi network, parental controls, access control, setting up a Dynamic DNS, VPN service and port forwarding. The security is also comprehensive, including the ability to block certain websites, keywords and services, on top of the already comprehensive parental controls. With the Orbi units, you are given the ability to control exactly what members of your family can see on the internet and when they can see it. Compared to a basic Wi-Fi extender system, the Netgear Orbi RBK23 set is clearly significantly more expensive, but for that price, you are not simply getting devices which extend your existing Wi-Fi network, often giving very unfavourable results. The Orbi units use a Mesh Wi-Fi network that is designed to completely replace any existing Wi-Fi networks you may have. Wi-Fi extenders can only communicate between themselves and the router, so even if you have several in the house, they all have to communicate back to the router, so the range can be poor.

With a Mesh Wi-Fi network, all the devices talk to each other. This allows for much better coverage as the units can be daisy chained to extend to the very furthest corners of the house. This creates a system that you could never have achieved just by using Wi-Fi extenders. The Orbi unit's key component is Netgear’s Fastlane3 dedicated backhaul technology. Rather than the router and satellites stealing the bandwidth from client devices when they need to talk to each other, the Orbi System has a dedicated quad stream, 5.0Ghz, 1766Mbps radio for these backhaul tasks. This allows full bandwidth for any other client devices connected to the Wi-Fi network. The Orbi system gives you one Wi-Fi network name, wherever you are in the house, implicit and explicit beamforming on both 2.4Ghz and 5Ghz bands and is compatible with Amazon Alexa and Google Assistant voice control.

The testing was carried out in a standard, 4 bedroom, detached house. As we have BT Infinity and a HomeHub, which has an integrated modem, the Orbi unit automatically configured the IP address to avoid conflicts. We tested using a PC connected via Gigabit Ethernet to the Orbi Router, then with a laptop connected via Gigabit Ethernet to one of the satellite’s Gigabit LAN ports. We then repeated the tests with the laptop connected wirelessly and the PC still connected via Ethernet to the router. The downstairs satellite is roughly 10 metres away from the router, separated by one wall, and the upstairs satellite is in a room above the router location.

We used a program called LANSpeedTest by Totusoft, which is a simple but powerful tool for measuring Local Area Network (LAN) speeds. It does this by building a file in memory, then transferring it both ways (without the effects of Windows file caching) while keeping track of the time taken and performing the calculations for you. This gave us the results of transferring files between our PC and the Laptop using the Orbi network.


The results above show excellent speeds from the satellites both by Ethernet and wireless, with a maximum speed of 550.35Mbps. These speeds are impressive and comfortably beat the Wi-Fi network provided by our lone BT HomeHub and any Wi-Fi extenders that we have tried to use in the past. Our last Netgear Orbi review, the RBK50 set, included just a single satellite along with the router and at the time of review cost over £320. Now available for a slightly cheaper £290, it performed well during our previous tests but was prone to frequent disconnections and took a long time to reconnect itself. During our testing with the RBK23 set, we had no disconnection issues at all and no speed drops. This is thanks to the three devices, rather than just two, which appear to create a more solid Mesh network. It should also be noted that, as it is a Mesh network, you can add as many Orbi units as you like, should you live in a mansion for example!

At £290 this Orbi set, which includes a router and two satellites, does sound like a lot of money when you compare it to the relatively low cost of devices such as Powerline Adapters or Wi-Fi Extenders. But those devices are notoriously unreliable, with Powerline Adapters heavily dependant on the quality of your internal wiring, and Wi-Fi extenders generally being very flaky and low-speed devices.

Here, the Orbi set gives you a high-speed, single Wi-Fi network throughout the entire home and one that is rock solid in performance and connection. Add in an effortless installation and setup, an easy to use app, comprehensive web-based portal and features such as a dedicated backhaul, implicit and explicit beamforming, advanced parental controls and in-built compatibility with Amazon Alexa and Google voice control, and suddenly the £290 doesn’t sound as bad as first thought. But the competition is now stiff in this area.

Mesh Wi-Fi systems are now becoming widely available, with systems released from all the main players. Other alternatives are the much cheaper £197 TP-link Deco M5 or £170 BT Whole Home Wi-Fi system, which offers three units like the Orbi system. These, however, are lacking in some areas such as only having dual-band Wi-Fi and no dedicated wireless backhaul, for example. Another alternative is the Linksys Velop system which offers almost identical features to the Orbi system but is available at a much more expensive £330. Weighing everything up, we are happy to award the Netgear Orbi RBK23 set our AV Forums Recommended Award.