This is not a film to have on in the background while you’re scrolling Facebook. 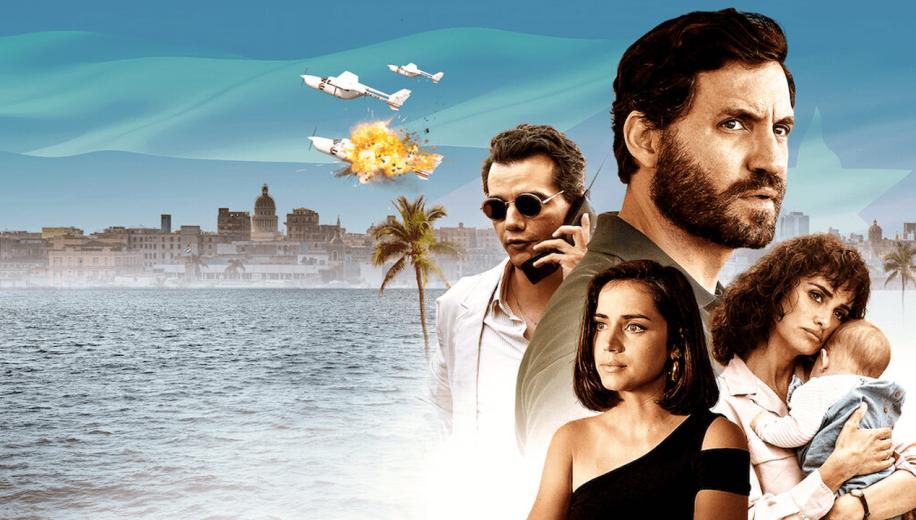 The widely viewed and critically acclaimed Tinker, Tailor, Soldier, Spy taught us lots of things, not least that spying is a complicated business. That’s made abundantly clear in this complex and twisty espionage drama from Olivier Assayas, which aims to illuminate the Cuban counter-intelligence groups who infiltrated the anti-Castro community in Miami in the early 90s.

We open with commercial pilot René González (Edgar Ramirez), who kisses his wife Olga (Penelope Cruz) and daughter (Osdeymi Pastrana Miranda) goodbye and heads off for a day at work. At first it all seems very normal, until René arrives at the airstrip and commandeers a biplane to head to America as part of a months-long plan to flee communist Cuba and fight for democracy in stylish, vibrant, art deco Miami.

In the US, René meets fellow Cuban exiles including Gerardo Hernandez (Gael García Bernal) and Juan Pablo Roque (Wagner Moura), who swims through shark-inhabited waters to defect to America at Guantanamo Bay. Gerardo informs American authorities that he’s finally had enough after seeing that the regime in Cuba has managed to survive the fall of the Soviet Union. Juan Pablo uses the migration as a chance to reinvent himself, working as a double agent for the FBI and pursuing a romance with Ana Margarita Martinez (Ana de Armas), a fellow Cuban ‘defector’.

There’s a section which propels us four years into the past, which ostensibly serves to outline how the Miami-based Wasp Network of Cuban spies came to be. There’s a helpful voiceover to try and keep the many characters straight for the audience, but it’s a bit of an odd change of pace midway through the film that actively highlights just how confusing the film is.

The film is based on the book The Last Soldiers of the Cold War by Fernando Morais, and sticks faithfully to it – it’s impeccably researched and detail orientated. Assayas lays out multiple interweaving connections and networks, shadowy partnerships, espionage and counter-espionage groups.

This is not a film to have on in the background while you’re scrolling Facebook – you need full concentration to keep track of all the details here. Assayas helmed the excellent mini-series Carlos – which also starred Ramirez – and it’s not hard to imagine Wasp Network working slightly better in the elongated series format, with more time to sketch out some of the details and introduce key players and important historical contexts. The film moves quickly to fit in all the information it needs to convey – sometimes relying on titles to introduce the temporal or physical setting – but in doing so doesn’t quite manage to land the emotional resonance we need to fully invest in all the individual characters.

It’s an often exciting and always fascinating film that’s almost clinical in its approach; it’s become a hallmark of Assayas’ work to trim away any excess flourish of style that might detract from the narrative substance – here it works to heighten the stakes and increase the palpable drama of the film. Arguably, it actually becomes a style of its own, reminiscent of some of the canonical political thrillers of decades past.

The film, for all its tonal seriousness and absence of Hollywood tricks, is beautiful

One of the standout sequences involves a young man (Nolan Guerra Fernandez) who agrees to plant bombs in Havana to further damage the Cuban state; this is perhaps the most beautiful and stylish portion of the film and feels almost wasted slipped into this film. Perhaps seeing the film on Netflix – which is more often than not associated with binge-watching TV series – might influence the way in which its narrative is consumed.

Though it’s overtly political in subject, the film is at pains to tell its story in a classically journalistic way. It doesn’t take sides or cast individuals as villains – this both works to create a truly fascinating historical film and means it’s sometimes hard to feel emotionally invested.

There are so many characters and plotlines that it’s a struggle to cram them all into the two-hour runtime, and it means that some characters – Olga, in particular – don’t get much exploration. Ramírez is brilliantly understandable as René, though again it would be enlightening to have more backstory and explanation as to his motivations. Moura is charmingly mysterious as the elusive Juan Pablo, while de Armas continues her run of scene-stealing performances.

The film, for all its tonal seriousness and absence of Hollywood tricks, is beautiful. Assayas was given unprecedented access to Cuba for filming, and captures the country’s rugged, brittle and tense beauty perfectly without giving it the sepia-toned fetishization we’re so used to seeing. The use of a few well-placed aerial shots offers more gorgeous aesthetics, and – like the truncated, seemingly slimlined narrative – leaves you wishing there was more to unpack.