Evil beware! These nuns are dealing out punishment. Nunishment. 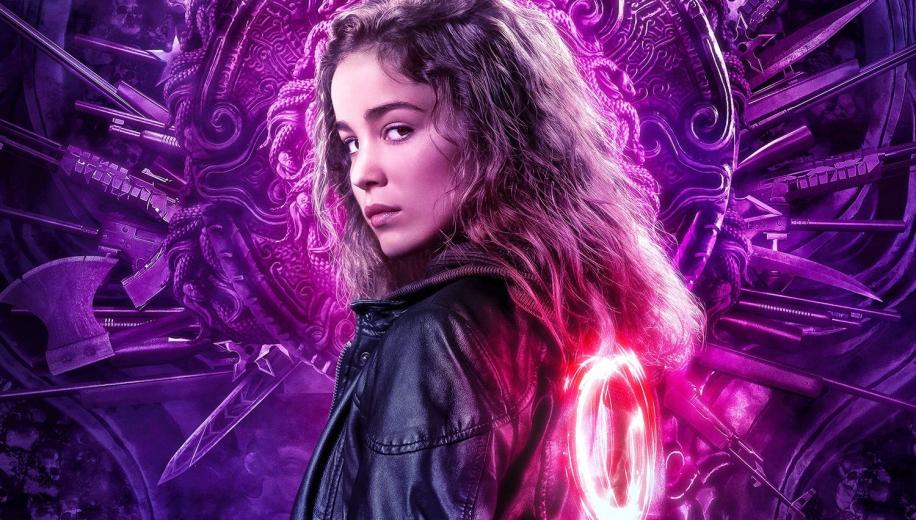 Based on Ben Dunn’s ‘T and A’ focussed comic series, Netflix’s latest supernatural teen drama gets rid of the sexist relics of 1990s comic publishing and puts the emphasis back on telling a well written story in an entertaining way, without giving in too frequently to the self-seriousness plaguing so much genre entertainment currently.

Ava is dead. After her short life spent bedbound in St Michael’s Orphanage following a car accident, she lies on a slab attended to by nuns and other clergy, including Cardinal Duretti. They are suddenly interrupted by a rush of activity: another nun has been brought in, mortally wounded. Sister Shannon, bearer of the divine halo of the angel Adriel, a necessary tool for killing hell spawn, is dying and must pass the honour (or burden) on to the next in line, Sister Lilith. But things don’t work out that way, and instead the halo is hidden in the corpse of Ava l...and Ava's eyes open.

Resurrected, with her ability to walk restored and a whole set of new powers granted her, including the ability to phase through walls, Ava must decide what to do with this second chance. Does she join the Order of the Cruciform Sword, protectors of the halo and fighters of the darkness, or does she go to ArqTech, a sinister corporation looking to harness the divine energy of the halo? Maybe she could simply run away with JC, the boy who found and helped her following her miraculous rebirth. Ava only knows one thing – she’s in control for the first time in her life and she isn’t going to be at anyone’s mercy.

...the levels of charisma throughout the entire cast are high

Ava is an engaging and likeable character played with great charisma by Alba Baptiste. In fact, the levels of charisma throughout the entire cast are high. Toya Turner as gun-toting nun, Shotgun Mary and Kristina Tonteri-Young as the unflappable Sister Beatrice create a dynamic and magnetic trio at the centre of the show. It feels like a naturally evolving relationship and the three of them seem to have fun with the script.

As well they might with episodes written by genre veterans Amy Berg (Person of Interest, Eureka), Terri Hughes-Burton (Alphas, The 100) and Solid Snake himself David Hayter (X-Men / X-2). Each episode is crafted with a good mix of genre trappings and invention and peppered with sly wisecracks.

The execution of the show is never as preposterous or goofy as its title or premise suggests. Warrior Nun is playful with its lore, for sure, but it never strays into the B-movie or grindhouse realm of its title. It’s the first time in maybe a decade that we’ve had a new quirky, action-packed supernatural teen drama as enjoyable as this.

It might not even be too much of a stretch to say it’s a bit like Buffy, only people say “f***” a lot and there’s blood splattered all over the place. The comparisons with Joss Whedon’s 90s mega-hit come very easily, in fact. The too-quick-witted teens, the strong female roles, the quiet bespectacled mentor with a chequered past…okay, maybe they actually just read the Buffy handbook.

Early episodes rely a little heavily on some extremely clunky voice-over. Ava’s inner monologue has a grating tendency to spell things out that we could probably have inferred with a simple look or action. That, or she states things that are blindingly obvious in the first place. The implication is that, as a paraplegic, she was her main source of company and this habit of talking things through in her own head is a hang over from that life. However, a good reason to use a technique, does not make the technique good and, with a few humerous exceptions – thirsting over her new crush, JC – it’s a bit of a chore. There is some small payoff to it in the final episode but not really enough to make its intrusions worthwhile.

One or two plot threads also fall a bit flat. The story of the intended inheritor of the halo, Sister Lilith, flails a little across the season, only just pulling together at the eleventh hour. With luck, actress Lorena Andrea will grow into the role as she is often the least comfortable presence on screen. The machinations of the Cardinal are also poorly explored and the plot twists which come in the final two episodes feel a little played out, even though one of them is bound to catch viewers off-guard.

Having said that, generally the series rolls along at a good pace and there are only one or two episodes which feel a little baggy (this is possibly the highest praise I’ve ever given to Netflix, whose modus operandi seems to be to have 8 hours of plot crammed into 13 hours of airtime).

...it’s easy to lose a couple of hours to the show before you know where you are.

The season is admittedly a little unbalanced, something fairly easily forgiven as the character focussed early episodes have just about enough charm to maintain interest. As the season arc develops and characters become fleshed out, the plot begins in earnest and from that point it’s easy to lose a couple of hours to the show before you know where you are. The show is happy to touch upon more serious thematic strands too: religious power structures, scientific ethics, ableism – there’s even a very measured, generally subtle and well-handled LGBT element; normalising those issues as part of life and part of history rather than hanging a big old hat on them.

The world of Warrior Nun might rely on old tropes depicting the Catholic Church as a cloistered monolithic entity full of dark histories, but it’s divorced from reality far enough to just go with it. Comparisons to Preacher can be made for its blasé iconoclasm but unlike that show, which started out flabby and not nearly as fun as it should have been, Warrior Nun feels more like it hits the ground running. Less concerned with being ‘edgy’ and more with just having a good time kicking evil’s butt, it’s a whole lot better than it really has any right to be.