"I was making a little joke. A German joke: it doesn't have to be funny." 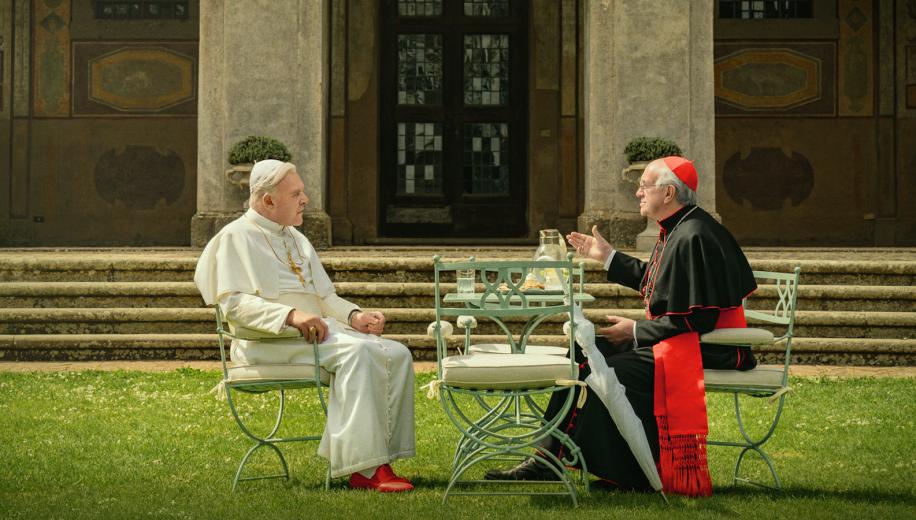 A simple dialogue between two disparate Popes provides an electric stage for theological discussions as the Catholic Church is caught up in some of its most controversial moments of the 21st Century.

Set against a backdrop of some of the most horrific revelations about the inner workings of the highest echelons of the Catholic Church, The Two Popes affords an intriguing clash of personalities, attitudes and beliefs. It's a potential minefield of controversy, but Fernando Meirelles' docudrama study navigates the treacherous waters superbly, eliciting just the right level of open dialogue without openly critiquing either side of the coin.


An intriguing class of personalities

After revered and much-beloved 27-years-in-situ Pope John Paul II passes, a new Pope must be elected, seeing the more traditional and conservative Joseph Ratzinger elected to be Pope Benedict XVI, attempting to return to more fundamentalist values associated with the Church, but facing some troubling times as the sexual abuse allegations within the Church continue to mount. Initially clashing with Cardinal Bergoglio - an underdog contender who won a surprising number of votes during Ratzinger's election - when he hears of the Cardinal's resignation, he calls for the man and the two undertake a dialogue which initially merely highlights their very different approaches with regard to the faith, but eventually affords some clarity to both of their paths in life.


Perfectly cast, The Two Popes is a masterclass in acting, seeing Anthony Hopkins and Jonathan Pryce on fabulous form as the two clashing theologists, with Hopkins ideal for the choice of the more traditionalist old timer, and Pryce - who actually even looks a whole lot like Bergoglio - superb as the more maverick underdog.

Whilst the film largely consists of vast swathes of theological discussions between the two, the script is pleasantly grounded in both anecdotal nuance - Ratzinger's recording an album at 'the Abbey' (Abbey Road), but then utter dismissal of Yellow Submarine, and just about anything else he'd never heard of, as 'silly' - and also suitably strong in tackling the underlying issues of the time (although, whilst they nod to the clash over approach with regard to sexual offenders, the portrayal is slightly inaccurate - it was actually Ratzinger who was the maverick in real life, clashing with prior pope John Paul II in his attempt to more appropriately deal with the offenders).

What's wonderful is the depiction of two very different approaches towards religion - the traditionalist approach arguably very much needed in the upper echelons in the Catholic Church, and the modern approach which is arguably much more appropriate to the changing times we live in - and how simple conversations between two characters can highlight some valid reasoning in both camps.

It's an absolute joy to watch Hopkins get a decent latter-stage role, the 81 year old master actor still making the portrayal his own, coming up with some snappy and commanding lines, whilst Pryce enjoys an arguably atypical (particularly after his flip side extremist in Game of Thrones) character to play.

The two-hours-plus dialogue isn't without its flaws, pulling in a possibly entirely unnecessary flashback subplot which doesn't really give the piece any more weight or worth, and losing both direction and momentum as a result - it completely kills the pacing an hour in, making the second half a tougher slog - but it's still a fabulous showcase for Hopkins and Pryce and a worthy watch just for them, particularly commendable in dealing with such a potentially controversial subject matter (religion is a nightmare of a subject matter for movies - as Scorsese can attest to with his under-acknowledged masterpiece, The Last Temptation of Christ) and highlighting a momentous period in the Catholic Church's changing of the guard which many previously probably only knew the headlines for.