All cops are being put out of work in two days...I guess we'd better let them know. Hope they're not upset! 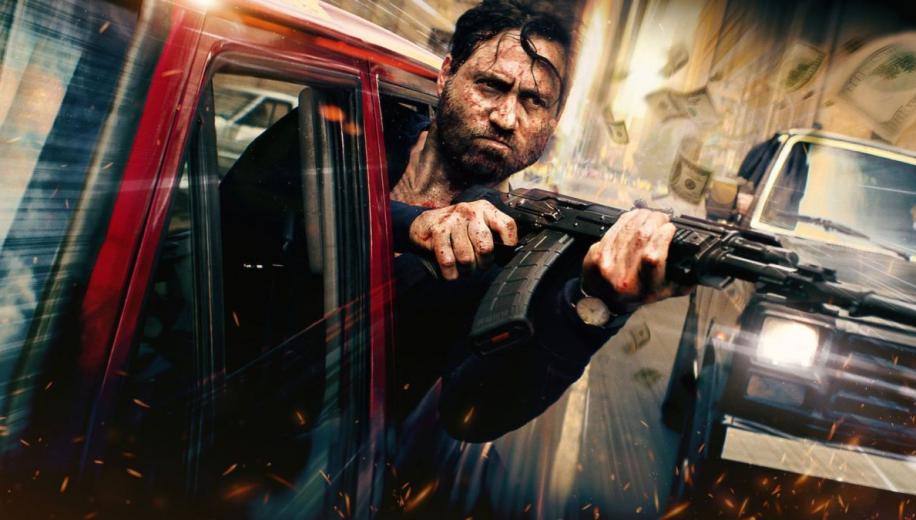 The distant future. The year: 1997; the place: the Americas. All crime has been outlawed by the tyrannical President Nimrod. Citizens live under constant surveillance and in fear of the evil corporation, "Looking and Watching Systems." The last remaining "crimers" brave enough to stand up to L.A.W.S. are stacked up in multi-storey priz-camps. These priz-os have become Crimer feudal systems and video pirates and murderisers alike are forced to train cyber-foxes to fight for respect. But President Nimrod wants to crack down even further on Crim-Scum and has plans to mega-nuke all the priz-blocks. Only one man - ultra-stacked immortal marine biologist, Jonathan Mousetown - has the guts to stand up to this ironic injustice of justice and he's got a date with his fists...and President Nimrod...who he's going to punch...wait, no...his FISTS have got a DATE...with DESTINY! (That's better) Could these really be...THE LAST DAYS OF AMERICAN CRIME?
*Vangelis knock-off synth kicks in*

If Oliver Megatron can half-ass the making of it, I'll be dammed if I'm going to use my full ass to write about it.

This isn't the plot of Olivier Megaton's (I will never get tired of that name) new film. This is a plot I came up with while I was bored sat watching MEGATON's film. The real plot is something to do with a special signal that stops people doing crimes because a brain-synapse-inhibiting-cortex-blah-blah-no science, who cares. Before this magical and inexplicable “signal” goes live, crims Graham Bricke, Kevin Cash and Shelby Dupree decide it’s the perfect time to pull off one last heist. For revenge. Because the signal killed Bricke’s brother. And stealing money from a “money factory” is good revenge for your brother being beaten to death by a guard. Wait, you say, didn’t I just read that his brother was killed by the signal? Maybe it’s all set up for a big dumb twist? WHO KNOWS?! Certainly not the screenwriter! I promise I’ve stopped making things up now.
Anyway, things don’t go according to plan. Explosions. The Last Days of American Crime. A movie.

I think from here on out I'm going to call it TLDAC. I'm not writing out the title every time for something so bland. If Oliver Megatron can half-ass the making of it, I'll be dammed if I'm going to use my full ass to write about it.

There are two ways to enjoy TLDAC. You could get a few friends around, get some nachos in the oven, lots of booze (or sugary drinks, no peer pressure here) and have a great time trash-talking this monstrosity. You. And all your friends. Together. In the same place. IMAGINE!

Jokes aside, I guess it could at least be a learning tool for aspiring filmmakers as well as a bit of positive reinforcement that, hey, if this trash can get made, so can whatever stupid idea you have! They could look at some of the key processes of making a movie. Processes that TLDAC gets tremendously wrong:

Lesson 1 - The Screenplay. Kids, if you want to make a movie, the easiest thing to do is take a story that someone else has already written and adapt it for screen. That way you don’t have to have pesky things like original ideas. Big tick for TLDAC here; it’s based on a Rick Remender penned comic book. Word to the wise, though, have a second pair of eyes take a look at your script. Even if you’ve written a movie before, chances are it could do with a little punch up. Take out the trite clichés - “WHERE’S MY MONEY?!”, “F- me? No actually it’s f- you!”; check for anything contradictory – The signal activates an innate ability to police yourself, the signal prevents people committing crimes, the signal just outright freezes you in your spot; nonsensical – The signal apparently stops dead at the Canadian border; or outright stupid - ”One billion dollars?! That’s like 20 cubic yards of money!”. That’s a big X for TLDAC.

Lesson 2 - Location. Find somewhere that gives you the most appropriate backdrop for your story within your price range. Why not choose to film in Cape Town where there are delicious 25% tax breaks for film production? Your story is also set in a crime ridden America and (little bit of xenophobia here) Cape Town looks enough like a dystopian heck-hole so, hi there, cheap production costs! But wait – an essential plot point to this film is that it’s set near the Canadian border. Still going with Cape Town? Are you sure? I guess, hey, the fact that it’s clearly 45 degrees out and the burning arid landscape kicks up dust and heat haze was obviously much less important than shooting the thing as cheaply as possible. That's a half tick, maybe.

Lesson 3 - Action. This is kind of important. If you’re going to stick with your stupid plot that’s full of twists, both nonsensical and obvious, you need to have something smart or original going on in the set pieces. Oh dear, another big old red X for Bolivar Megaguns. TLDAC is boring. It is BORING. It is two and a half hours long and there isn’t a single vaguely entertaining punch-up, car chase or gun fight. Ollie Mechanun, what are you doing?

TWO AND A HALF HOURS LONG!

Here’s the TL;DR, friends: The dialogue is god-awful, the acting is either wooden or cartoonish, the sex scenes are so gross, the action is over-the-top – but not really in a fun way - and nothing that happens makes any sense. And, just to reiterate, TWO AND A HALF HOURS LONG!

In the first scene of the film, Bricke is offered some “Soviet level, melt your face off” bioweapon (from a man’s pocket. In a pub. For $4k! What a bargain!). With half an hour to go before the end of the movie, I would have paid double that for the sweet release of a painful, mutilating death at the hands of an evil Soviet scientist.

So until lockdown is over and you can party a bad movie – just don’t.

Let me just leave you with a quote from one of our heroes, which I think illuminates things quite succinctly:
“Sometimes everything is just bullshit” - Shelby Dupree, TLDAC, 2020