"Whenever anybody says they're a little concerned, they're very concerned." 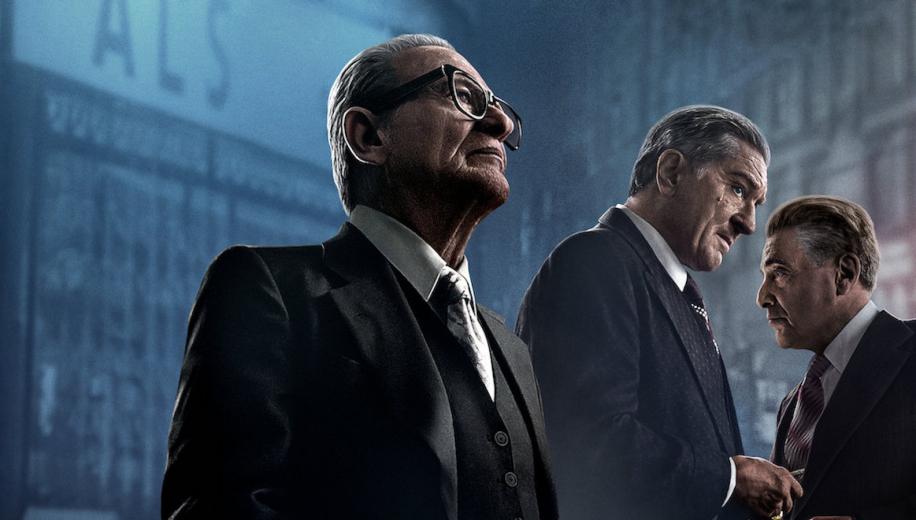 Scorsese, De Niro, Pacino, Keitel, and Pesci - The Irishman is almost everything you could possibly hope for from this long-awaited ensemble gangster epic.

Almost 25 years ago, the glorious 22-year run of collaborations between legendary auteur Martin Scorsese and equally legendary method actor Robert De Niro came to an end with their 8th film together, the masterpiece that is Casino. Since then, Scorsese took in younger blood, namely Leonardo Di Caprio, who afforded the director a further couple of decades of some of his biggest Box Office successes, whilst De Niro's career floundered.

The idea of a further Scorsese film with De Niro seemed like an absolute impossibility and, indeed, when the duo came up with a plan for a tremendous new gangster story to tell, which would tie in the likes of Al Pacino - working with Scorsese for the first time - and Joe Pesci - who has been in retirement for decades - no studio wanted to bankroll it. Then Netflix came along, and whatever you might want to say about them, without them, we would not now have a fabulous bookend to a quartet of careers - Scorsese's best film since his golden run with DiCaprio (which arguably ended with 2010's Shutter Island) and easily the best films that the likes of De Niro, Pacino, Pesci and Keitel have done in decades.


It's magical; an event, and whilst some would rightly argue that it's no less or great an event than the tremendous MCU bookend Endgame earlier this year, it's certainly great that 2019 brings us both

An elderly Frank Sheeran, in a nursing home, muses over the decades of work he did working for the Mafia, how he first encountered future longtime best friend, mob boss Russell Buffalino, and ended up doing jobs for him and - eventually - working closely with Teamsters boss Jimmy Hoffa, an outspoken and extremely powerful man whose ties with the underworld would eventually threaten to bring it all down.


Watching The Irishman, it's easy to see what we have been missing in the years since Scorsese did a proper gangster epic (no, not counting the inferior remake to Infernal Affairs he undertook). He's at home in this environment, revelling in the news stories and committee gatherings; the quiet conversations between powerful people; the easy narration of events and vast coverage of an entire era of crime; the on-screen read-out of the fate of some of these individuals; and the frequent burst of violence that punctuate the whole grand Shakespearian opera. It's magical; an event, and whilst some would rightly argue that it's no less or great an event than the tremendous MCU bookend Endgame earlier this year, it's certainly great that 2019 brings us both.

With surprisingly tasteful de-ageing - which is briefly and intermittently apparent, but largely forgivable and soon completely forgettable - Robert De Niro gets some of the best work he's had in years, committing to a tough role as the narrator, and the viewer's way into the movie, but also an outright killer whose line of work does not go unnoticed by his own family. The veteran does well considering he's been struggling to find a juicy role in decades - and at 76, time is not on his side - but, thanks to Scorsese's fine skills behind the camera, and some impressive digital technology, De Niro gets to veritably revisit his youth, rising to the occasion and making for a convincingly tough protagonist who is faced to make some even tougher choices. Sure, it would have been nice to have him a little more fleshed out - especially given the ample runtime - but De Niro makes it work as Frank "It is what it is" Sheeran, and he's supported by one of the finest ensemble casts of the year.

Pacino, properly teaming up with De Niro for the second time (only counting the masterpiece that is Heat; in Godfather Part II they never shared the screen, and, well, Righteous Kill should just never be played on a screen for any reason ever) gets a suitably vocal part commensurate to his shouty style, and it too gives him the best material he's had in years - here he's actually playing a wildly outspoken character, and he utterly embraces it. Some might favour the underrated Jack Nicholson portrayal from the 90s, which probably has the edge, but Scorsese tells a bigger picture now, and Pacino's Jimmy "This is my union" Hoffa is an integral part of that.

The ensemble cast pull in a number of new faces too, with Stephen Graham perfectly chosen to be the volatile component - the Joe Pesci from Goodfellas/Casino contingent - brief but good use of Ray Romano (Get Shorty), and cameos for the likes of Bobby Cannavale (Mr. Robot), Anna Paquin (The Affair) and Jesse Plemons (El Camino), whilst Keitel is on complete ageing Mr. Wolf duty from Pulp Fiction, also enjoying his first union with Scorsese since his brief but memorable long-nailed cameo in Taxi Driver, and making the most of a choice extended cameo part. Despite all of the big names in both the big and small roles, the underdog standout award clearly goes to Joe Pesci, who largely disappeared from the limelight in his post-Casino, post-Lethal Weapon 4 years, and who returns here to a quiet, but powerfully understated role - possibly a contender for one of the best crime boss portrayals of all time.


Scorsese's best film since his golden run with DiCaprio and one of the best films that the likes of De Niro, Pacino, Pesci and Keitel have done in decades

Clocking in at an unforgiving 200+ minutes, an understandable argument could be made that it's an unwieldy beast that could have done with some judicious pruning around the edges, possibly taking it down to a more manageable 2 hours and 29 minutes, rather than that extra hour longer. But watched at home, with glorious 4K Netflix and Dolby Vision on form for once, it's much more manageable, and just comes across as a joy to spend more time with this group of ageing friends who you almost don't want to let go of come the end of the movie. Sure, this is nowhere near Casino levels of perfection, wobbling a little at the outset whilst you get used to the de-ageing, fat around the middle, and failing to quite bring out the emotion in some of the latter-end tragedies, but overall, it's still a superb return to form by all involved, and should absolutely be celebrated for bringing to life the unthinkable in 2019 - another Scorsese/De Niro/Pesci collaboration.

The Irishman works just fine as a tribute movie, a reunion, and a tragic farewell all rolled up into one gorgeously shot, quintessentially Scorsese, gangster epic; powerfully acted, punchily scripted, superbly scored, and utterly unmissable. And, you know what, if they'd made it an hour longer, nobody would have argued with these guys over it.