Is there any better endorsement than one from Stephen King himself? 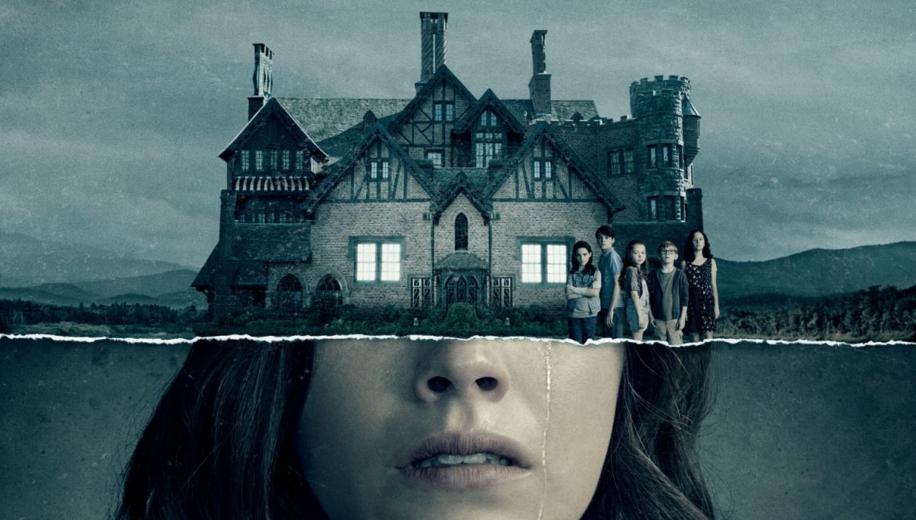 One of the best TV series that nobody saw coming - the excellent Netflix mystery horror show The Haunting of Hill House.

The 1959 novel The Haunting of Hill House is reportedly regarded as one of best ghost stories ever written, which was undoubtedly a contributing factor in the decisions made to adapt it repeatedly over the years - once in 1963 for a well-received British adaptation, and again in 1999 for the widely panned US remake, both merely titled The Haunting, and now here in long form for Netflix with the original title intact.

Despite pre-dating it by some decades (and one could argue that, given it is reportedly one of Stephen King's favourite books, it may have indeed inspired some of his work), the story for The Haunting of Hill House is eminently comparable in style to King's seminal masterpiece, It. Thus it is unsurprising to find that this faithful - albeit contemporary - adaptation also sits comfortably alongside both the TV and movie versions of King's It, with the common theme of a close-knit group who experience mysterious but shared horrors as children which return to plague them as adults.


This adaptation sits comfortably alongside both the TV and movie versions of It.

The Haunting of Hill House follows a large family of seven, with the parents and their five children - two boys, Steven and Luke, and three girls, Shirley, Theo and Nell - moving into a mansion to renovate and sell it so that they can build their dream home; a home designed by the mother, Olivia Crane, and to be built by their father, Hugh. Immediately taking a dislike to the place, it's not long before the children start to experience strange happenings within the house, as supernatural entities creep up on them at night, scare them in their sleep, and surprise them in the basement.

In adulthood, the siblings are still suffering from their experiences as children, with Steven angering the rest by seemingly cashing in on their misfortunes by writing a successful book about what the family went through, whilst Luke - a twin who shares a preternaturally close bond with Nell - has become a drug addict to cope with the visions he still has. Shirley runs a mortuary, whilst Theo and Nell are also more directly affected, with Theo preternaturally 'sensitive' to other people's feelings (a gift she shared with her mother) and Nell simply unable to let the horrors of the house go, resulting in a tragedy which draws them all back together once and for all to address what they went through. It's unfair to call The Haunting of Hill House Netflix's answer to Stephen King's It, particularly having already established the possibility that they really came the other way around, but it's also an apt way to secure interest in one of the best projects to hit the streaming giant. Sure, Stranger Things is an excellent little 80s throwback horror series - also involving kids - Maniac offered some psychological thrills, and there is a slew of other productions that meet the broad category. But The Haunting of Hill House largely stands apart, crafting a tale innately founded upon characters in preference to just narrative stepping stones.

Each chapter (at least for the first few) is keenly focussed on one individual character, charting a cross-pollination of key events from the adulthood and childhood, with strands often coalescing with previous events from earlier episodes, filling in the pieces of an elaborately designed puzzle in which the players are as much a mystery as the game itself.

This means that almost entire episodes can play out without much in the way of conventional scares (the addict episode is more horrific when the blind group member recounts how he lost his sight), and instead provides a razor-sharp focus on building up a full picture of this quintet of individuals, what binds them, and what draws them back to the titular house.


It's no wonder that Stephen King himself has lauded this as being 'close to a work of genius'.

The acting is superb across the board, with the biggest names - Carla Cugino (San Andreas, Sin City) and Timothy Hutton (Jack Ryan, City of Industry) - important players but still really left with glorified cameos in comparison to the children and their adult counterparts, with a great set of child actors headlined by the President's daughter from Designated Survivor, Mckenna Grace (who plays a young Theo), who also recently impressed as a bolshy young Tonya Harding in the excellent Margot Robbie biopic I, Tonya.

Those playing the adult counterparts are more familiar and more seasoned, with Kate Siegel - the adult Theo - standing out as the 'gifted' member of the family, an actress who's got more than her fair share of horrors under her belt, including the noteworthy Hush, as well as the recent Netflix Original Movie Gerard's Game, based on the Stephen King novel. Game of Thrones' Michiel Huisman takes the lead of the boys as the adult Steven, but Oliver Jackson-Cohen is also quite impressive as the adult Luke, particularly in episode 4, when he has to play all kinds of strung-out (even when not on drugs, as the twisty narrative shows). Newcomer Victoria Pedretti (who plays the tortured Nell) is also worth keeping an eye out for, next appearing in Tarantino's Once Upon a Time in Hollywood.

One of the most impressive aspects of The Haunting of Hill House, remains its dedication to painting a full picture of these individuals, and whilst the shock tragedy of the opening episode may have had a little more impact, say, 5 episodes in, it was arguably necessary to get the whole ball rolling as a reason to bring the kids back together after forging separate paths in their disparate adult lives.

None of this is to say that the series isn't scary. It's expertly scary, chilling you with creepy moments that come out of nowhere; shock noises and random appearances of mysterious entities but also forming exquisitely effective horror through blurring the line between reality and fantasy (Nell's frozen 'dreams' are a great example of this). Sure, the upside-down woman with the black hair who looks like she walked in from the Ring movies is creepy as all hell, but more effective is the simple inability to bring Luke up in the dumbwaiter when he's stuck in the basement, or the fact that nobody can explain a torn shirt - or the fact that, on top of all of that, they randomly hit you with a scary wooden pumpkin face just to drive a nail into the coffin that once housed your nerves.

The Haunting of Hill House delivers on all counts. It's no wonder that Stephen King himself, despite reservations about modern horror reinventions, and despite being a proclaimed fan of the original novel, has lauded this as being 'close to a work of genius'. If you managed to miss this, then there's no better time than Halloween to get your chills on.