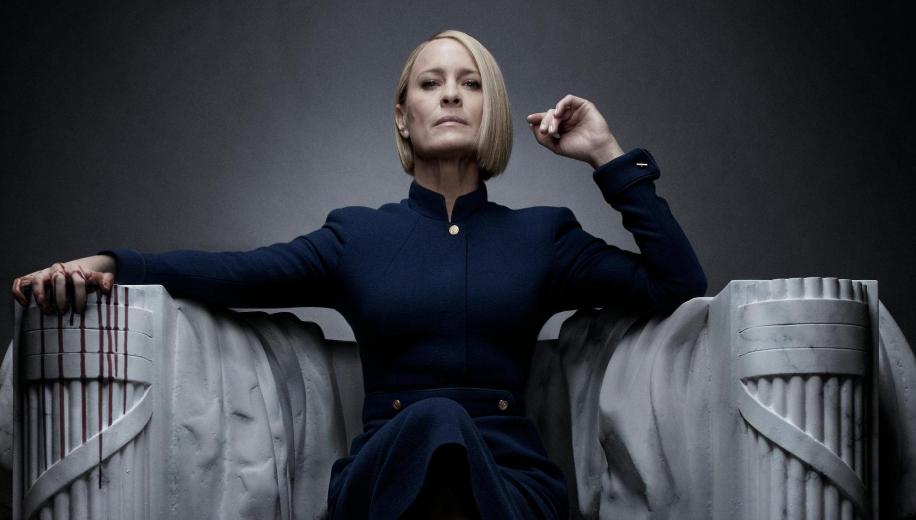 Although it's easy to write off the impressive Netflix Original production House of Cards just because it was basically Kevin Spacey's House of Cards, and without Spacey's Machiavellian manipulator, Frank Underwood, it ostensibly makes about as much sense as Lethal Weapon without Martin Riggs. But House of Cards has been building to something over the last five seasons, with the rise of Frank to become President, inevitably destined to result in his magnificent fall - or, at least, as was suggested, faked fall to be reborn as something greater than a mere President.

Season 5 actually set things up perfectly for the loss of Frank - whether or not the show was ever designed to lose him completely. The season ended with the sociopathic master mischief-maker falling before his wife's rise to the throne only to reveal that he'd planned it all for her and that he was going on to greater things, to pull the strings behind the presidency. But then the twist came when she refused to take his final telephone call - and refused to pardon him as he expected - instead, turning to the camera to state, quite clearly, 'my turn'.


Despite Spacey's much-publicised fall from grace, the transition to a series without the legendary Frank Underwood isn't all that contrived.

So, despite Spacey's much-publicised fall from grace, the transition to a series without the legendary Frank Underwood isn't all that contrived, with the sixth season on strong footing right from the outset. The trouble is, judging it on its own merits, it can't help but feel like something is missing - and this is less about the loss of Spacey's Frank and more about the shortcomings of Robin Wright's President Claire Underwood.

Wright was exceptional in the show over the last five seasons, easily matching up to Spacey's ruthless husband with her own style, grace and strength. She could stand up to him, stand up to anybody - even those Frank couldn't handle - and could manipulate (and kill) as coldly as her husband ever could. But they were a great team, and what's lacking is not Spacey, but somebody for Wright's Claire to collaborate with, scheme with, and fight with. She's one half of a conjoint union, and however tough she comes across, she feels incomplete without someone - even a lesser, supporting player - at her side. Stripped down to just 8 episodes after the consistent 13 episodes delivered in all of the preceding seasons - not to mention announcing clearly that this is the 'final season' - there's already an innate feeling that Netflix had lost faith in this product. But for a burgeoning - massively in debt - streaming giant who has likely hundreds if not thousands of original products by now, it's nice to see some respect shown to their very second commissioned original show ever (following Lillyhammer). It's been with Netflix for the duration and deserves a fitting conclusion, but there's still something immediately self-defeating about pitching Robin Wright as the centrepiece of the show and, in the same breath, announcing that - good or bad - she's going to be gone in just 8 episodes.

Season 6 - the Final Season - spends altogether too long dwelling in the vast shadow of Frank Underwood. Not of Kevin Spacey, but of Frank Underwood, with Claire's primary battles coming from the contrived appearance of 'old friends' who want debts owed by Frank to be paid by his newly empowered wife. House of Cards enlists big names to help sell its swan song, with Diane Lane and Grey Kinnear rising to want their pound of (dead) flesh, but their presence is more jarring than threatening, as if they were old characters from a season that viewers missed, when they are patently new additions drafted in to fill a gap.


There's something self-defeating about pitching Wright as the centrepiece and, in the same breath, announcing she's going to be gone in 8 episodes.

Far more interesting is the return of Michael Kelly's excellent character, Doug Stamper, back to his best as he works in the shadows, unravelling the fate of his former boss and supposed closest friend, Frank, whilst he faces down against Claire. And, indeed, to give her her due, Wright is excellent in the story arcs that are all about her - whether it's an early visit to a supposedly contaminated home (where she happily takes her mask off; her defiance complemented by flashbacks of her similar strength in youth) - or battling old series regulars Patricia Clarkson, Jayne Atkinson, Campbell Scott and Lars Mikkelsen's fabulously realised Russian President Viktor Petrov.

However there's altogether too much Frank Underwood left to muddy the waters, and she's adrift dealing with such plot lines, unconvincing as someone quite so naturally manipulative but - more importantly - unable to make her own mark. The character simply isn't given the opportunity, and Wright (particularly now she's involved in directing episodes, which she's been doing for a while now) should have made this a priority if she wanted to stand a chance of stepping out of Frank's - and Spacey's - shadow.

The season does get going, three episodes in and it ends with a dead body which ruffles some feathers, with the Russian conflict in the fourth episode further enhancing Claire's defensive run, but you can't help but feel that they wasted 3 episodes getting there, giving just 3-4 more proper quality episodes before the show makes its end run and the bodies mount up in satisfying but unusually overwrought style (hell, even the dead body in episode 3 was left field for this particular show) rounding out a final season which had a hard - arguably impossible - task delivering a conclusion to six years of manipulations, let alone doing it without the lynchpin of House of Cards, Frank Underwood. Fans will find this utterly unmissable - impossible to resist getting those last final answers - even if House of Cards was never as good as during its earliest, hungriest, seasons, and even if life in the shadow of Frank just isn't quite the same.