"So what do you want to write about?" "How about...a lovely horse?" 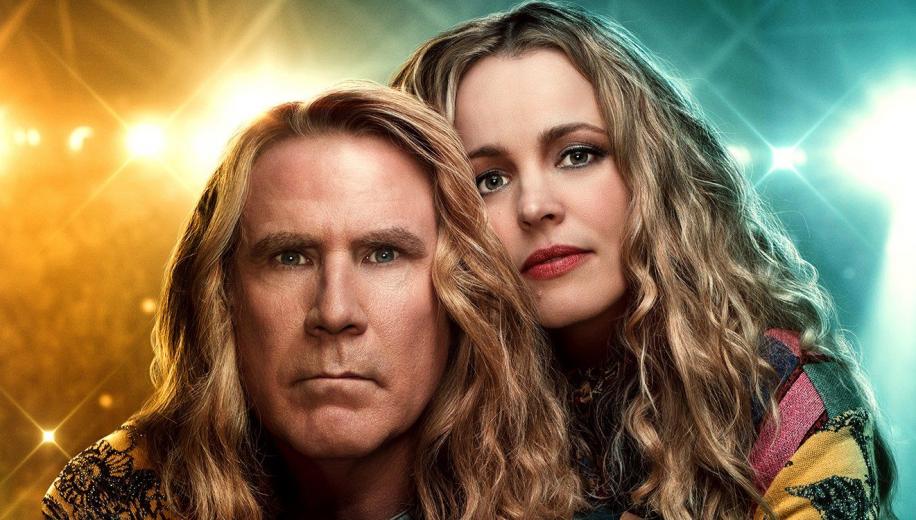 The Olympics of music – except just for Europe…and Russia…and Israel…and Australia?! That’s right, I’m talking about the beloved mass insanity that is Eurovision! It’s camp! It’s gaudy! It takes itself too seriously! It must be ripe for parody! Well maybe it is, but Eurovision Song Contest: The Story of Fire Saga is really only interested in showing us how great it all is…oh, and Will Ferrell saying mildly amusing and stupid things. So, if you don’t happen to love Eurovision madly, my advice is do not watch this film.

Lars and Sigrit (Will Ferrell and Rachel McAdams) are Icelandic pop duo ‘Fire Saga’. The pair, who are “probably not” brother and sister, have one dream: to win the Eurovision Song Contest for Iceland. When an accident knocks out all the other Icelandic hopefuls from the running, the pair find themselves going to the semi-finals by default. But between Alexander Lemtov, a scheming Russian popstar (Dan Stevens), and Victor Karlosson, governor of the Central Bank of Iceland sabotaging their efforts, can Lars and Sigrit finally bag Iceland’s first Eurovision win?

Though very fondly remembered for comedy super-successes Anchorman and Talladega Nights, the lightning in a bottle that was the partnership of Will Ferrell and Adam McKay has long since fizzled out; the only time Ferrell has had any serious input in writing his own material in the last 12 years has been on the lukewarm Anchorman sequel. During those years, various writers and directors have attempted to ape the casting and adlib heavy format of those earlier collaborations and, in the process, completely misunderstood what made Ferrell’s best movies such hits: Mckay’s perfectionism.

It’s clear simply from watching the end credits of something like Anchorman or Talladega Nights that McKay’s process is to shoot a hundred takes. When his cast adlibs, McKay leans into it, but always asks for another take, and another, and another. Then there’s an opportunity in the edit to pick out the gold amongst hours of footage where something repeatedly fell flat. When you look at, for example, Get Hard, it seems obvious that the prevailing attitude now is that whatever comes out of Will Ferrell’s mouth is dynamite and you print the first take.

With Fire Saga. Ferrell is back co-writing his material with another SNL veteran, Andrew Steele, and though The Story of Fire Saga attempts to recapture some of the heart of those 2000s hits, the reliance on Ferrell to deliver hilarious nonsense at full volume continues to be a stumbling block.

Will Ferrell does Will Ferrell things and says Will Ferrell things in a Will Ferrell way. Sometimes that’s funny, more often it’s starting to feel like your dad doing a Borat impression. Thankfully, Rachel McAdams is a saving grace and is admirably game for anything, an attribute she demonstrated to better effect in Game Night but one which also does this movie a big favour.

But it is for the second time this year I find myself praising Dan Stevens for being the most entertaining element of a very middling film and scratching my head over who is choosing these projects for him. His commitment to the character of the barely-closeted Russian star turns what could have been a one-dimensional campy villain into a lovable rake, struggling with maintaining a straight façade for his Russian audience. His performance is by turns hilarious, disgusting and alluring and he steals every scene he’s in. On the other side of the supporting cast, Pierce Brosnan makes an appearance as Lars’ father in what is possibly his most detached performance ever, though I guess there’s some entrainment in watching him trying to wrap his mouth around Icelandic pronunciation.

The real praise for the film, however, has to go to the song-writing partnerships of Rami Yacoub and Savan Kotecha and Gustaf Holter and Christian Persson who worked on the majority of the soundtrack. The songs are diamond dust. Not once do they stray into outright parody but all remain very firmly planted in tradition, perfectly recreating the high camp, catchy madness that defines Eurovision. The songs are funny but in the honest-to-goodness sincere way that any Eurovision entry is funny. And did I mention they're catchy? Because they are catchy.

Honestly, the best way to experience the film, might just be to buy the soundtrack.

Similarly satisfying, is the genuine affection that the film seems to hold for the little peculiarities of Eurovision. Turns like the little cringeworthy broken English exchanges between the hosts or the frustrating timewasting of the points announcements (“This is Romania calling. How is everyone enjoying the show tonight? We are so pleased to share with you our results!”) are scattered throughout.

Past winners also pop up to take part in song medleys or one-liners and, in what’s possibly the strangest and most awkward decision, Graham Norton comments on the performance of Fire Saga’s song. The point that’s oddly missed, is that Norton’s comments are only funny because they are off the cuff remarks that cut through the treacly hyper-sincerity of the acts. Having him say scripted lines about a scene which is scripted to go badly is so far off the mark as to be confounding.

In fact, there are one or two slight elements of parody amongst the great affection on display. Namely in a concern that Iceland doesn’t actually have the money or infrastructure to host the contest should they win but, upsettingly, there’s not a single mention of a certain “lovely horse” anywhere.

Honestly, the best way to experience the film, might just be to buy the soundtrack. Unfortunately, the songs are few and far between and, over the course of its lengthy runtime (whatever happened to a tight 90 minute comedy?)  The Story of Fire Saga seems more interested in mining laughs from funny accents or “isn’t America terrible” jokes and plodding steadily towards its foregone rom-com conclusion. There are a few decent laughs toward the end of the movie, but boy, oh boy, does it ever take its time getting there.

Oh, and let me repeat, if you don’t harbour a deep abiding love (ironic or otherwise) for Eurovision – there is absolutely nothing here for you.