aka "I will DESTROY you." 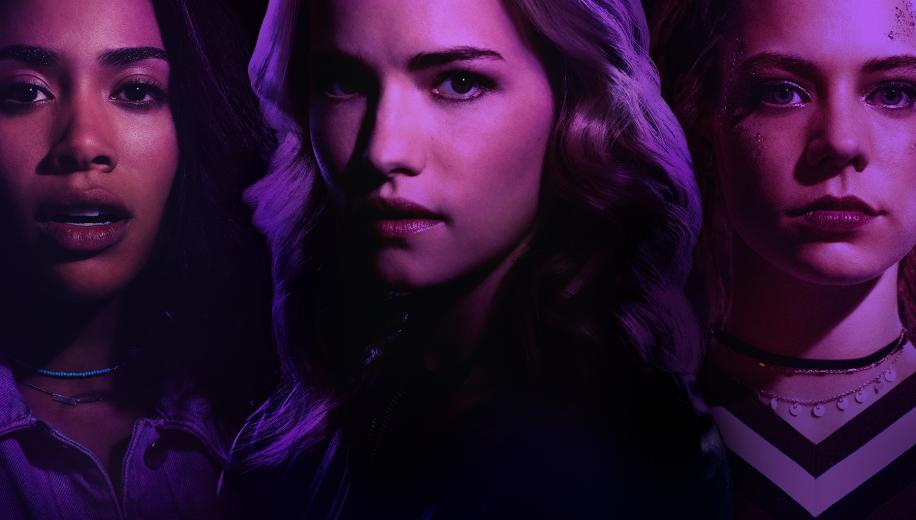 A slightly darker variant on Netflix's Spinning Out, here the focus is cheerleaders rather than ice skaters, but the competition is no less fierce, and the obsession no less dangerous.

Obsessive teen sports drama could easily become its own little niche sub-genre, with Netflix championing it all the way. Whilst it would be all to easy to drift into lightweight melodrama - which is arguably what Spinning Out was more often than not on the precipice of doing - unhinged behaviour rules out here, with damaged teens wreaking further damage as seemingly petty squabbles and social slights turn into woman-scorned episodes of snowballing retribution. Despite the chance for it to go way over the top, Dare Me actually quite admirably reins it in, delivering a production which feels like a Netflix counterpart to HBO's intoxicating Euphoria - and a decent one at that. Whether you're a fan of Euphoria, or Spinning Out, this one might be worth a look.

There's a moody, occasionally even dark, and fleetingly unpredictable vibe to the proceedings

Beth and Addy are an unstoppable BFF duo, and residing queens on the cheerleading squad, with Beth the fierce and unforgiving captain of a team who she supports, but who also do what she commands. That is, until young new coach Colette French arrives, eliminating the captain position on the squad, and seeking to do things her way. As the two butt heads, Addy gets caught in the middle, with the stakes raised at every stage and nobody prepared to back down.

Dare Me shouldn't really be this engaging, but it somehow is, cleverly playing out a seemingly formulaic tale of warring Alphas with just that added touch of care put in to the backstories - those involving both Beth and Addy's respective family background inform their reactions to the revelations featuring Coach French, which gives organic depth to the decisions made. Perhaps it helps that it's adapted from a source book (writer Megan Abbott also helped adapt it for the screen) which probably has more meat on its bones than the average Netflix production would enjoy, but Dare Me is a nicely unfettered - although not uniquely so - spin on this landscape, enjoying the broad range afforded by its 15 certificate. There's a moody, occasionally even dark, and fleetingly unpredictable vibe to the "dangerously uncontrollable teen" proceedings and, sure, the cold open teases the mess we're going to end up in (c.f. Netflix's I Am Not Ok with This), but the show cleverly maintains that ominousness even over the long haul.

Whether you're a fan of Euphoria, or Spinning Out, this one might be worth a look

Willa Fitzgerald - from the actually halfway decent Scream TV show - is on solid form as the coach, but the scene-stealers are protagonist Addy (The Get Down's Herizen F. Guardiola), who tries to be the loyal but reasonable one, albeit increasingly out of her depth, and Marlo Kelly's borderline sociopathic Beth, who you know is just never going to get the help she so clearly needs - at least not until after countless lives have been ruined by her damage-born destructiveness. They're actually interesting roles, and the extreme sports competitiveness and sheer obsession on offer make for compelling viewing - as is the cornerstone of most sports dramas. If that takes your fancy, then it might prove worth a look.
﻿