Trauma, conflict and Vietnam as told by Spike Lee 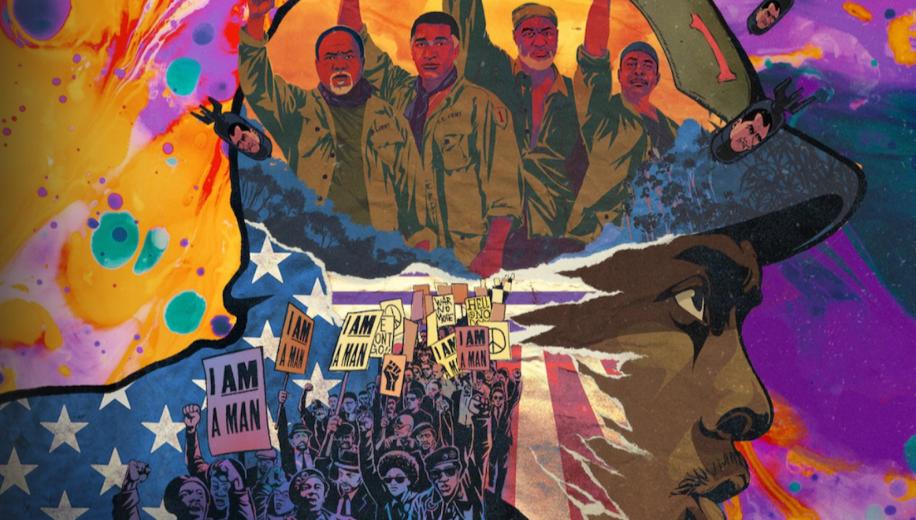 A timely arrival to Netflix, Spike Lee’s new film Da 5 Bloods unravels the long-lasting violence and trauma of the Vietnam War. The film follows four Black veterans who return to Asia to try to recover the remains of their leader Norman (the perfectly cast Chadwick Boseman) and a trove of gold bullion they left behind.

It’s a Spike Lee joint, so you know this is going to be unlike anything we’ve really seen before. You should also know going in that it’s inherently political, and it’s not sorry about it either. The film is typically unflinching, unyielding and unapologetic in its portrayal of the controversial and horrific war. The chaos and roller-coaster nature of that conflict itself is reflected in the medium; Lee blends styles, genres, media and colour across the runtime, never lifting his foot off the adrenaline pedal.

Paul (Delroy Lindo), Melvin (Isiah Whitlock Jr), Otis (Clarke Peters) and Eddie (Norm Lewis) have, naturally, aged in the years since they left Vietnam, but their fallen leader Norman never got the chance to grow old.

We’re shown the five men’s story through ‘flashback’ sequences, though the four men who made it out are decidedly not aged-down Scorsese-style. We’re shown the quartet as they are in the present day – sweating, less svelte and even more terrified – alongside youthful Norman, who behaves as their fearless squadron leader but who appears to us as more like their son.

The film is bookended by Muhammed Ali and Martin Luther King Jr, who share at least two things in common: their importance for the Black community, and their vocal opposition to the war in Vietnam. Ali was famously professionally punished for his stand against the conflict, while it has been argued that King’s words against America’s military action could have contributed to his eventual assassination.

In using two universally recognisable Black figures, Lee emphasises that Da 5 Bloods is so much more than a film about veterans and Vietnam. It’s partly about the way Black Americans are implied in some quarters to be less American than their White counterparts. The film critiques and exposes the propagandist nature of countless classic Hollywood war films and posits itself as something entirely different. For a start, centring the story on a group of African American men is a new direction for Vietnam films: watching titles like Coming Home, Rambo, Platoon, Apocalypse Now and Full Metal Jacket you could be forgiven for believing that the American side of the conflict was overwhelmingly White, when in fact over 30% of the soldiers serving under the star-spangled banner during the war were Black.

The titular five bloods are the five men who fought in the war, rather than the four veterans and Paul’s son David (the superb Jonathan Majors) who tags along to keep an eye on the old men’s adventure. The four war survivors have found vastly different lives post-conflict, and each fit a classic buddy movie trope – there’s a joker, a straight man, one slightly out of touch with the others. Then there’s Paul, a MAGA cap-wearing Trump convert, played marvellously by Lindo. Lee makes no mistake of the dark comedy at play here, whether its referring to Trump as ‘President Fake Bone Spurs’ or having Paul utter the fantastic line “there were atrocities on both sides!”.

There’s more than just tongue-in-cheek trolling going on here though, of course. Paul is much more than shock value or comedic relief. He’s arguably the most layered and multi-dimensional character in the whole film, with pockets of grief, guilt, trauma and anger colouring every scene he’s in.

Da 5 Bloods is ostensibly a war film, but it’s also part heist, part comedy, part drama and part documentary. Lee elegantly interweaves real footage and images into the narrative for an effect that is sometimes shocking and sometimes yanks at the heart strings.

There are obvious parallels to war flicks like Apocalypse Now at play here, but there’s also a clear homage being payed to The Treasure of the Sierra Madre, not just through the central treasure hunt of the plot, but also Lindo’s firebrand monologue which is reminiscent of the rambling speech Bogart gives climbing through the mountains (though Lee has Lindo speak directly to camera, which is hairs-standing-up powerful).

Lee’s timeline jumping isn’t overdone, and while seeing our older characters step back in time without de-aging is an odd experience at first, it’s soon apparent that it works perfectly to illustrate the men’s state of mind. Not only can they now look back on the war with a hindsight their younger selves lacked, but they never left Vietnam throughout their lives. It always haunted them, and they left part of themselves on the jungle battleground.

There’s also some insight into the Vietnamese perspective through guide Vinh (Johnny Tri Nguyen), and the French one through a handful of characters including sly businessman Desroche (Jean Reno) and rich landmine connoisseur Hedy (Mélanie Thierry). One of the most elegant subplots of the film involves Tien (Le Y Lan), a former sex worker who facilitates the Americans’ heist manoeuvrings. Tien was in a relationship with Otis when he was in Vietnam, and a brief scene here calls attention to the under reported issue of children fathered by GIs who were left behind.

This is surely one of Lee’s best, and couldn’t have come at a better time

Performances are revelatory throughout the cast, across the American, Vietnamese and French characters. There’s Majors, who elicits a quiet concern from college boy David that is as pitch-perfect as his Montgomery in The Last Black Man in San Francisco. Both Thierry and Lan have the opportunity to do some affecting and considered work as two well-crafted characters essential to the development of the bloods.

There can be little doubt, however, that Lindo is the backbone, the heart, the soul of this film. His complicated, complex, contradictory performance is truly one of the greats. Blending pastiche, sorrow, comedy, parody, anger and vulnerability, this is acting for the ages and is worth the price of admission (heh) alone.

Behind the camera there’s plenty to admire too, with heartbreakingly beautiful shots constructed by Newton Thomas Sigel’s cinematography and a surprising, evolving score by Terence Blanchard (punctuated by the unmistakeable tones of Marvin Gaye). The script is mostly exquisite, piled high with references and lines that puncture like bullets, and where it sometimes teeters on the edge of scruffiness it’s saved by Lee’s seasoned use of cinematic sucker punches. This is surely one of Lee’s best, and couldn’t have come at a better time.

It’s quintessential Spike Lee – by turns wild, violent, confrontational, messy, emotional, symbolic, funny and outrageous. Viewers can, and most likely will, view this film how they want. It can be seen as a darkly comic, violent meditation on Vietnam with absorbing action and lots of signature Lee style. On its surface after all, it’s a film about a group of former brothers in arms who return to the scene of their truly formative years. But there’s also a significant commentary on questions of war, patriotism, trauma and memory at play, as well as a powerful exploration of how Blackness is used, ignored, perceived and exploited that couldn’t come at a more poignant (or ironic) time.