If you look, you will die. Do you understand? 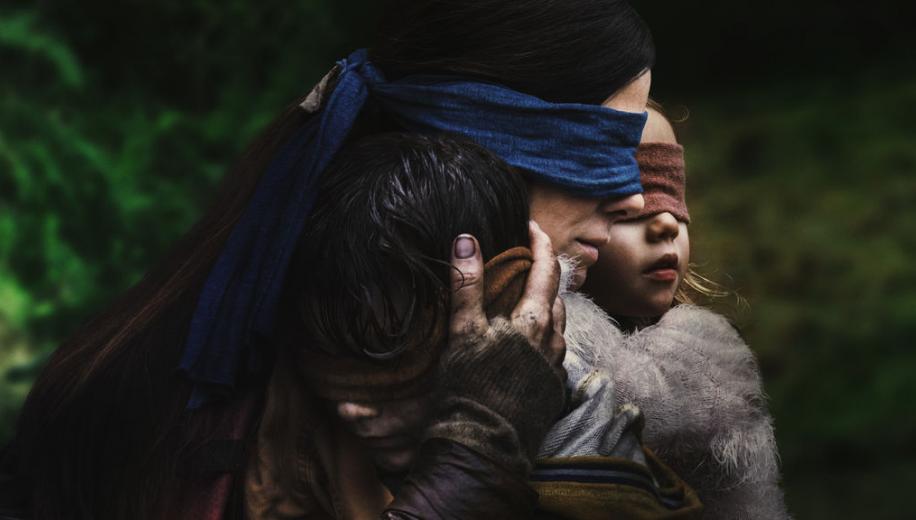 Netflix's anticipated Sandra Bullock-starring variation on A Quiet Place (and, in turn, Pitch Black) arrives with this supernatural horror.

Based on the 2014 post-apocalyptic debut novel from Josh Malerman - which he reportedly started work on long before Shyamalan's very similarly themed The Happening, Danish director Susanne Bier's Bird Box is a taut and well-structured psychological horror.

Rather surprisingly, it survives comparison's to the (admittedly better) A Quiet Place, delivering a more supernatural variation in the vein of Stephen King's The Mist. Using a suitably atmospheric combination of creepy supernatural scares, survival suspense and post-apocalyptic chaos, it escapes the dreaded Netflix curse to close 2018 out with one of the better titles in their burgeoning catalogue of original movies.


A taut and well-structured psychological horror.

Blindfolded, Malorie leads two children to a boat to make a long voyage down the river; as they make their trip, we flash back to the events that brought them to that place. Five years earlier, just moments after news of an outbreak of violent mass suicides, a then-pregnant Malorie encounters the 'outbreak' first hand while travelling back from the hospital with her sister, taking refuge with a disparate group of survivors who soon realise that the attack method is something strange 'infects' you visually - causing you to want to immediately commit suicide.

Attempting to take steps to cover up their eyes, the group finds that simple actions like going outside to look for provisions are suddenly not only impossibly hard but also deadly dangerous, as they wander the blind landscape with what sounds like demonic spirits circling them ready to pounce.

The stage is set effectively when the whole world goes crazy, and - sure - this is more Walking Dead scale than World War Z, but it's convincing nonetheless, as we watch those affected wantonly walking into oncoming traffic, or into flames. The remainder remains cleverly low key, minimising scale to heighten the effect. Although ostensibly pitched as a scary blindfolded trip down a river for Bullock and some kids, Bird Box actually spends more time trapped in a single house with a whole group of people, playing out a kind of cross between a Romero flick with the zombie threat replaced by a Ring-esque 'don't look' gambit, seeing the main characters slowly but surely whittled down in numbers, and desperately trying to find a way out of their claustrophobic situation.

The group is actually a little more surprisingly cast than you might expect too - it's not just Bullock starring in the piece, with Sarah Paulson (reuniting with Bullock after Ocean's 8) playing her sister, and Trevante Rhodes (Moonlight, The Predator), Rosa Salazar (the Maze Runner and the upcoming Alita), 'Lil Rel' Howery (Get Out), BD Wong (Jurassic World), and even the ever-reliable John Malkovich, making up the eclectic bunch. Despite that, it's Bullock who does most impressively with the material, seeing her chance to capture some more desperate survival stress in the vein of Gravity, and taking it, whilst realistically showing some genuine growth in character over the non-linear course of the narrative.


It escapes the dreaded Netflix curse to close 2018 out as one of the better titles in their burgeoning catalogue of original movies.

Shot impressively by frequent Ron Howard collaborator Salvatore Totino (Dolby Vision works wonders with the darker blinds-closed visuals), director Susanne Bier makes Bird Box a competent addition to her thematically similar filmography (her films often observe the behaviour of small groups of people in the aftermath of some trauma, whether war or a death in the family etc.) drawing some memorably atmospheric shots of the river run, and a fabulously moody score from frequent David Fincher composer collaborators Trent Reznor and Atticus Rose (benefitting from the Dolby Atmos presentation which makes for a wonderfully atmospheric immersive offering).

With its two hour duration, Bird Box has enough time to offer up a fairly effective triple-climax, in all three timelines, bringing things to an expectedly devastating climax within the house (as the opening sequence portends), then hitting you with the final bloody events five years later that cast the survivors onto the river in the first place, before finishing that tense wild river run, maintaining a surprising unpredictability to the fare whilst also cleverly keeping things mysterious when it comes to the evil threat.

Faring slightly better in the horror/sci-fi/post-apocalyptic realms (Cargo was also a nice zombie gem), and certainly expanding out in terms of their oeuvre, there have been some interesting offerings from Netflix in 2018, and from some big directors - from Gareth 'The Raid' Evans' The Apostle to Alex 'Ex Machina' Garland's Annihilation; from David 'Hell or High Water' MacKenzie's Outlaw King to Paul 'Jason Bourne' Greengrass' 22 July - and it ends on a high with the disparate but equally, and separately, impressive Roma from Alfonso 'Gravity' Cuaron and this tense horror, Bird Box. It may not be A Quiet Place, but it's certainly Netflix's A Quiet Place, and well worth checking out.