Ghost in the Sleeve 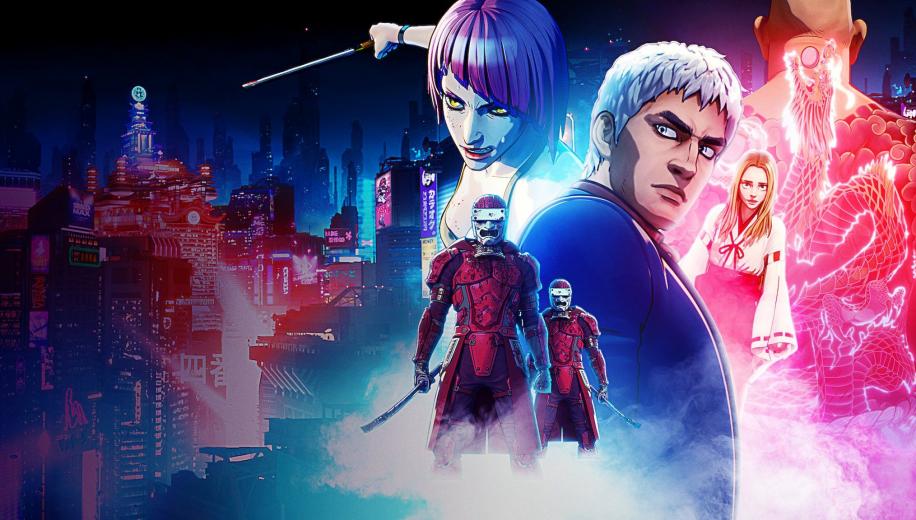 Few will disagree that season 2 of Altered Carbon didn't quite live up to its predecessor, leaving this action-packed future-tech anime room to reset the balance.

Richard Morgan's colourful futurescape of downloadable consciousnesses, resleeving in any body you want, and theoretical immortality for the rich - who can just upgrade their 'sleeve' - focussing on a lead character of former Government soldier-turned rebel warrior, Takeshi Kovacs, as he is brought back to life across the centuries to serve the bidding of a variety of clients, is rich for mining. Netflix's first season of Altered Carbon did a fantastic job of bringing the first book - also called Altered Carbon - to life. It was basically a murder mystery, only set within an expansive Neo-noir futurescape in the vein of Blade Runner. The second season went somewhat astray however, effectively wasting the potential material of both the second and third books by utilising elements from both. Now, with rumours of bringing Morgan back to the fold to write further adventures beyond his initial trilogy, we get a 'prequel' chapter, looking at some of Kovacs' earlier exploits, successfully repurposing a resleeved Kovacs for the neon-drenched future-Tokyo-esque world of Latimer, as he gets embroiled in a messy Yakuza war.

Resleeved on Latimer, Kovacs is on bodyguard duty once more, assigned to protect a young tattoo artist during a burgeoning war between Clans, and crossing paths with a battle-hardened CTAC assault trooper, whom he must reluctantly team-up with if they want to survive successive attacks from mysterious tech-ninja assassins who want the girl dead.
﻿

﻿Although the Netflix adaptation had a superior budget with which to play out its depiction of the expansive futurescape afforded by the books, there's no denying that the animated realm is a more liberating arena for such futuristic exploits, embracing the furious action those familiar with the book may feel was never quite achieved even at the height of the two seasons. Similarly, the Neo-Tokyo environment, and Yakuza theme is perfectly suited to the material - even if it doesn't directly come from the source novels - delivering up a blood-and-action-drenched Altered Carbon chapter which has been liberally infused with a perfectly apt Ghost in the Shell vibe.

Not quite gelling seamlessly with the tales already told (you just have to assume that it takes place before Altered Carbon, although the reality is that it more likely fits better in an alternate reality where the characters are perhaps more aligned with those in the books) continuity questions shouldn't really affect your enjoyment of this discrete chapter in the adventures of Kovacs, a colourful and interesting character who - if this is successful - may well earn a series of animated Netflix outings set within this Yakuza-infused universe. Sure, there is a sacrifice on character depth in favour of frenetic action, but the mystery narrative is intriguing enough, playing into the whole immortality theme, and the hints of background to Kovacs and his reluctant CTAC partner (as incongruous as they may be to the characters from the TV show) at least give it some familiarity and distinction from the usual romantic twist.

None of the cast members from either (or both) seasons of the TV show return here to reprise their roles, apart from Chris Conner (the A.I., Poe), albeit not quite in the same part, however you might recognise the CTAC enforcer as the latest voice actress behind Major Motoko Kusanagi in Ghost in the Shell (Elizabeth Maxwell), furthering the connection to that similarly-themed future-tech franchise. Certainly the cast - both US and Japanese - do their best to work with distinctly action-driven proceedings, with that same action delivered with stunning visual innovation (sure, no Dolby Vision here, but the animated style is still a cut above anything that the traditional DC universe offers, for example) and blistering with bloody fury. Swords are the name of the game here, with the graphic violence - despite an ostensible 15 rating only (the same rating as Superman: Red Son, which just shows how broad the bracket is) - far in excess of even what we saw in season 1 of the live action Netflix series.

Fans of Altered Carbon, fans of Ghost in the Shell, fans of anime and fans of bloody sci-fi action should probably consider this a strong offering, sitting comfortably alongside not only the other entries in its own franchise, but also other Netflix efforts like Love, Death and Robots, and, with a new Ghost in the Shell anime movie just around the corner, it looks like Netflix have found another niche to capitalise on with strong offerings.