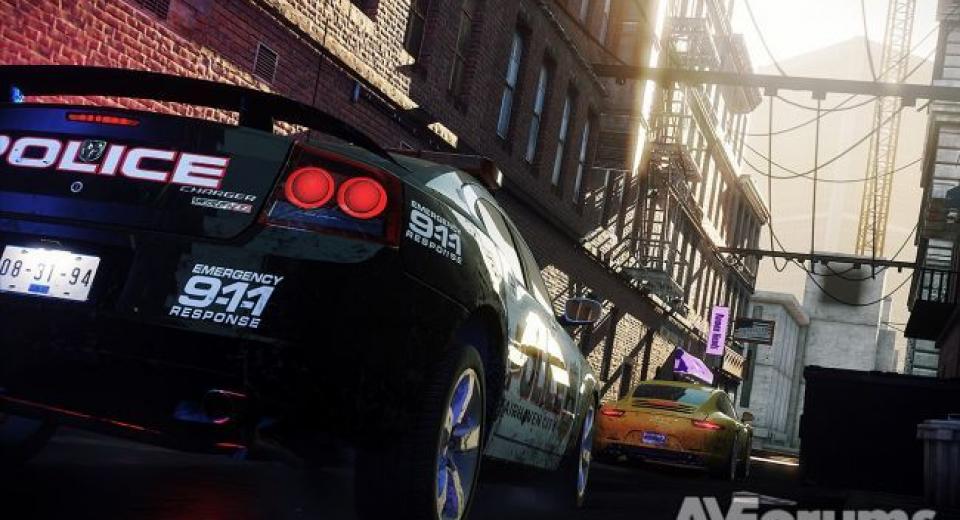 If Criterion’s latest racer is an exercise in getting what you asked for, then those of us that pined for an update to EA’s classic Most Wanted have finally been silenced. Where 2010’s Hot Pursuit carved out a niche as a beautiful and highly focussed point-to-point racer with a dual career shared between evading the police and taking to the streets with sirens blaring, 2012’s Most Wanted takes to the streets as a mashup between Burnout Paradise’s free-form driving and the grimy city of Black Box’s Xbox 360 launch title. Those are solid inspirations on which to build a reboot of any racing game, but Criterion’s normally-impeccable open-world structure falters just a little this time around, leading to a slightly underwhelming but still highly entertaining experience.
Dropped into the industrial city of Fairhaven at the beginning of the game, it’s pretty much down to your own initiative to drive around triggering or avoiding police chases and discovering new avenues of destructive nitrous-fuelled racing to keep you occupied. In the Criterion tradition, there’s quite a range of distractions packed into those shady streets; from the ubiquitous smashable billboard hunts and their accompanying jumps and stunts, breakable scenery masking the entrances to hidden tracks, stealable supercars that unlock further tiers of races (each car has five individual challenges attached, which form the core of the singleplayer offering), repair garages to blitz through at speed, upgrades to peruse and a decent-sized network of roads and city zones to uncover.
In that respect, Most Wanted really is a straight heir to to Burnout Paradise, sharing most of the component parts of that game’s celebrated DNA. Like its forebear, the directional pad on the controller provides quick and streamlined access to the race and upgrade menu, and it’ll even let you switch straight into multiplayer mode with a couple of clicks and a brief pause to load into a party. Vehicle handling - so much a crucial part of the experience to get right - also bears a huge amount of similarity to Paradise, with copious amounts of heavy understeer requiring suitable finesse with the handbrake to bend even the nimblest of the cars to your will. Once you’ve adapted however, that same sense of roaring speed and seat-of-your-pants drifting floods back with an adrenaline rush that few other games manage to match. You’re never quite in control. As such, the accessibility of those ridiculously quick vehicles is a somewhat tricky balance to get right for new players; and I’m not entirely sure that Most Wanted puts its best foot forward in that regard. Most of the pre-upgraded cars are lumbering, weighty beasts with a frightening top-end, and it’s difficult to get a true feel for Criterion’s famous engine until you’ve stolen a variety of rides at their individual pun-filled ‘jackspots’. Upgrading each of your vehicles is also crucial to being able to compete at even mid-tier races and above, but Most Wanted does a pretty bad job of communicating any of that to the player. You could feasibly be left banging your head against mid-tier races until giving up in frustration.
Once you hit the right class of upgrade and are able to compete however, Most Wanted’s races come alive. There’s a none-too-subtle amount of rubber banding going on behind the scenes to keep things close and cinematic, but that’s exactly what you’d want from this type of game. The police chases that accompany a lot of those pursuits (complete with spike strips, chargers and the ability to switch off your engine to increase the ‘cooldown’ rate) are tough, brutal and immensely entertaining; at least for a while anyway. Their novelty quickly wears off when you just want to get to the next destination, and it’s often faster to simply get busted and carry on, as there’s no penalty besides missed credits. Those credits do count towards your overall rating on the 'Most Wanted' list however (there are 10 ‘boss’ cars to unlock, race and take down, based on your overall score), but points accumulate quickly enough through other races and general play for it not to matter.
If you stick with it and figure out the systems that underpin everything in Fairhaven then, this is an entertaining world to explore - if entirely different in tone to the beaches and gleaming buildings of Paradise City. As we’re dealing with licenced cars this time around however, the traditional Burnout-style explosive crash animations are nowhere to be seen, and whilst Most Wanted is still a heavyweight in terms of overall visual appeal, damage modelling and cinematic replays are notably toned down here. The framerate too, is a little questionable at times (at least on the 360 version we played), which may be something of a shock to those of you expecting the solid 60fps of Paradise or the locked-but-beautiful 30fps of Hot Pursuit. As with pretty much every multi-platform game these days, play it on the PC if you have a rig capable of doing so. Once you’ve tired of exploring the streets on your own, Most Wanted’s multiplayer mode will welcome you with open arms and instant accessibility in comparison to the singleplayer offering. It’s unstructured and brilliantly entertaining mayhem, in which dirty tricks and savage tactics rule the tarmac rather than polite racing lines and any form of respect for other players. Criterion’s developers have obviously played their competition’s offerings to death, and armed with the knowledge that pretty much every other racer devolves into carnage after the first corner anyway, why not just build your entire mode around that prospect instead of pretending people will be courteous?
It works, and brilliantly so. Multiplayer matches take the form of a playlist in which five activities are selected at random and then your party of racers run through each one to determine high scores. You might be racing point-to-point one moment and then burning through circuits the next, or in competition to see who can make the longest jump off a conveniently placed hill or having drifting competitions around a massive sculpture in the middle of the city. There are team modes embedded into the lists too, so that huge rivalry that you just developed will have to turn on its head within moments. Or perhaps not. It’s your call.
There are few - if any - defining borders to your behaviour. Each of the multiplayer playlist events takes place at a rough starting point in the city, and you’ll be shunted there if you dawdle too long en route. Once you’re near the starting line though, you can pretty much take off as soon as that timer starts ticking down. There are no grids, no rules, and if you cross the line or get eliminated, you’re encouraged to try and wreck the progress of other racers with takedowns; they all earn points towards your total. If you’re in one of the starter cars or something that’s underpowered, you can immediately steal the vehicle and upgrades of any opponent that performs a takedown on you, ensuring that events never devolve into a battle between players that have unlocked the best gear. It’s a superb touch, and one of many that mark out Most Wanted’s multiplayer as being very special indeed. There might not be a whole lot of structure there to keep you coming back (it’s certainly lacking the depth of something like a Forza or a GT5), but as a dip-in dip-out online arcade-style racer, I’d hesitate to say there are any finer examples than this. If you can get a group of friends together you’ll have a blast, and even when teaming up with a party of strangers, it’s compelling to simply be able to act like an idiot in all those ways that are frowned upon elsewhere.

Most Wanted successfully blends the police chases and open-world structure of its chief influences then, but the structure of those singleplayer events and the performance of its engine leaves a little bit to be desired when compared to past Criterion racers or something like Forza Horizon. It’s not that the offline components are particularly lacking in terms of content or quality, but rather that the experience of ploughing through them is a little too schizophrenic for my liking. The structure is strange, but the racing is as good as ever.
Taken online, it’s another kettle of fish entirely. Most Wanted shines as one of the best multiplayer experiences i’ve had this year, and it’s the perfect game to drop into for either a quick burst or a lengthy session over a couple of hours. If you have a group of friends that previously sped through the streets of Paradise City, you’ll fall instantly in love with Fairhaven's playlists and madcap approach to competition. It might be a shame (for some) that the style is gloomy and the car licences prevent the trademark Burnout-style spectacular pileups, but nevertheless, Most Wanted is still near the top of its class for 2012.