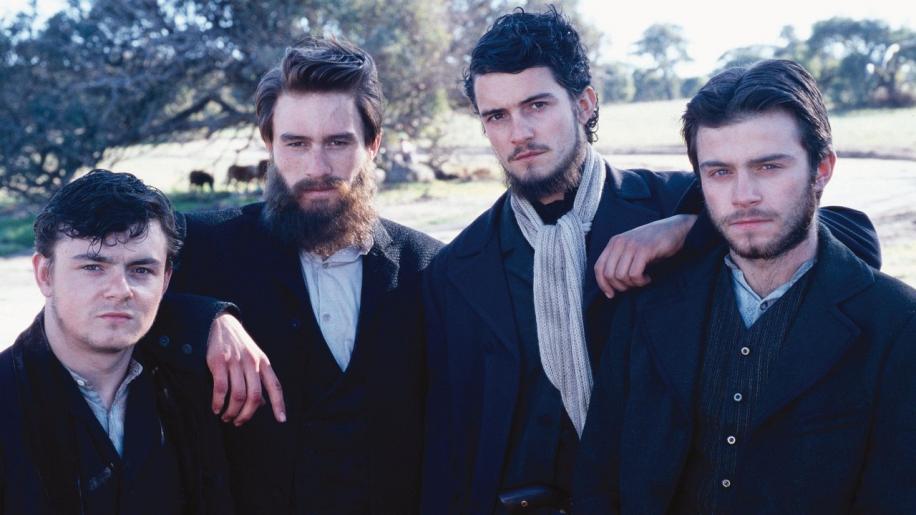 Directed by Gregor Jordan (Buffalo Soldiers) and based upon the novel “Our Sunshine” by Robert Drew, Ned Kelly (played by Heath Ledger) tells the real-life legend of the leader of a notorious gang of outlaws who were hunted across Australia in the late 1800’s.

Kelly’s poor family is just trying to survive, but things take a turn for the worse when a local police officer takes an unhealthy and persistent interest in one of his younger sisters. Unsurprisingly, events spiral out of control as the family takes matters into their own hands. Assisted by his brother and friends (including Orlando Bloom) Kelly manages to incur the wrath of the law, which results in his mother being imprisoned and forcing them to fight back at the law.

Cue several dead policemen later and the band of four outlaws turn to crime to survive, robbing banks and generally having a good time, and seemingly winning the respect of the greater public in the process. Of course, life can’t continue like this, and Geoffrey Rush steps in to lead the man-hunt for the notorious Kelly gang….

Ned Kelly sounds like it has all the right ingredients for an epic, sweeping tale of injustice, revenge and “Robin Hood” style heroics. Unfortunately, not even the all-star cast can lift this beyond the mediocre, due to a weak script and direction.

Aside from the fact that Ned Kelly offers us nothing new (the plot sounds all too familiar doesn’t it?), none of the characters are fleshed out enough. The Naomi Watts subplot feels superfluous to proceedings, and Geoffrey Rush in particular is wasted, having little to do it seems for the duration. Not enough is made of the relationship between the gang, nor the family, nor anyone else in the film, and the end result is that the viewer remains detached from many of the events which happen onscreen. By the time the movie ends there is nothing of the emotion that such a finale should evoke

Ned Kelly isn’t a bad movie, it’s a passable couple of hours entertainment, but sadly it can’t elevate itself anywhere beyond the “average” category. This is even more of a shame considering the cast.