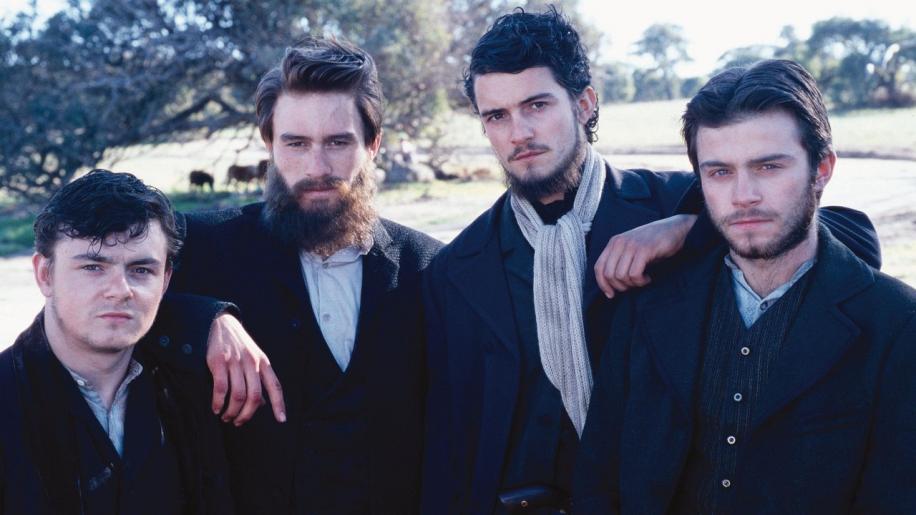 Framed in 2.35:1 anamorphic, the transfer here is exceptionally disappointing. Given it’s such a recent movie (at the time of writing Ned Kelly has just finished it’s theatrical run), I was somewhat surprised to see – in the opening few minutes – a print with frequent marks and scratches present, and prevalent grain.

Whilst most obvious on scenes featuring skies, grain appears far too frequently for a modern release, and the scratches are unforgivable (some recently remastered movies of 10-15 years old look better than this).

That said, the colour saturation looks pleasingly natural with the palette of earthy tones rendered well – in particular the forest scenes look excellent – and the level of detail in the blacks is reasonable.

Shame then, that as the film progresses and the scratches become slightly sparser, that edge enhancement becomes apparent. Again, you notice it mainly where we see objects framed against skylines, but haloing does become apparent at other times. At worst, it’s obtrusive and again, one could be forgiven for thinking this isn’t a movie from 2003. A shame really, as other areas on this transfer are pleasing. Could have been better.

We have the choice here of watching the movie in both DTS and Dolby Digital variants. I chose to watch the movie in DTS, and this mix offers a solid – if uninspired – audio experience. The soundstage is mainly locked across the front three speakers, and here dialogue comes through clean and crisp, with steering executed reasonably well.

The surrounds are used sparingly, and although they do come into play they would benefit from more frequent use. They do, however, add ambience in a number of scenes (just not enough), and some directional effects come into play in the action sequences. Again, though, it all feels rather average.

LFE usage is restrained, although your subwoofer will get a handful of cone-trembling workouts at some of the key moments of action. More apparent is its main role of reinforcing some of the dialogue – which it underpins nicely – and other moments such as where we see horses galloping past the camera. It certainly adds some richness to the mix, which would otherwise feel very flat.

Comparing the DTS mix to the Dolby Digital variant reveals some obvious differences. Replaying a number of scenes in Dolby reveals an altogether duller audio experience. Gone is the depth, and indeed it almost feels like the 5.1 has just lost the .1 – it’s that lifeless in comparison. In the scene where we see the Kelly gang practicing their shooting skills in the forest, the gunshots in DTS hold some weight and feel lively: upon switching to the Dolby counterpart it sounds like they’re firing cap guns. Even Heath Ledger’s voiceover after the firing has finished sounds flat in Dolby compared to DTS, which offers richer dialogue. It’s worth noting that the bitrate for this Dolby Digital soundtrack is only recorded at 384kbps, which may go some way to explain its obvious shortcomings (though that in itself is no excuse).

If you didn’t have the DTS option obviously you wouldn’t know the difference, and there are still moments in the Dolby track where the LFE channel does its work, and all channels are still used. But compare the two options and it’s a night and day difference.

So overall we have an average soundtrack, but do yourself a favour: pick the DTS option.

The extras in this DVD package are rather lightweight. Most substantial is the 13 ½ minute documentary “Ned Kelly in Popular Culture”, which is an interesting look at Ned Kelly’s origins in Australia’s history, including a look at his previous incarnations and references in various movies (who ever thought Mick Jagger could have played Ned Kelly?).

Also included are two theatrical trailers, featured in 1.85:1 anamorphic with Dolby 2.0 sound. Wrapping up the slim pickings are a series of static – and ultimately pointless - screens, which feature pictures of the real Kelly gang, an Artist to Feature comparison, and Poster Concepts. All of which sounds about as dull as actually are.An average movie, coupled with a dubious-for-this-day video transfer and a solid, though unremarkable soundtrack makes this is an essential purchase only for Ledger/Bloom fans and those interested in the legend of the man himself.