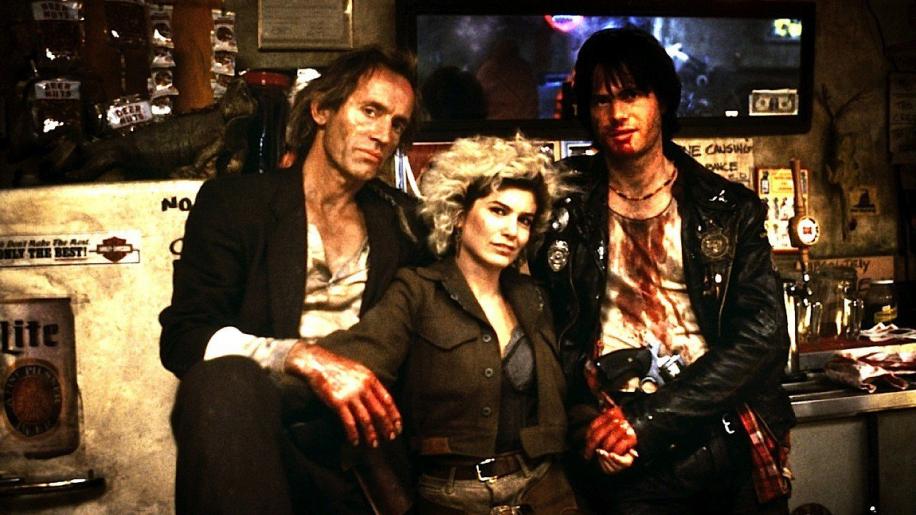 Sporting an anamorphic 1.85:1 transfer, Near Dark sadly hasn't stood the test of time well. Featuring extensive grain in the early scenes (the opening five minutes exhibits this quite obviously on a large display), it's also apparent in other scenes throughout the running time. Couple this with obvious edge enhancement and we have a transfer which is far from perfect.

Of course, those with smaller displays might not notice the haloing quite as much, but even on a 28” screen it is still apparent - the opening credits feature ringing, and in particular scenes which are well lit bring this problem to the fore.

There are other areas, however, which are more pleasing. Colour saturation can be considered reasonable, with little in the way of bloom, and shadows - whilst not quite as deep as more recent releases, do retain detail reasonably well. It is here however that we find some further problems, with some blocking artifacts springing up from time to time in the darker scenes.

Overall this is a very average video transfer, and certainly below the standard of what we'd expect from a new release. One might argue that the source material is quite old (almost 17 years), however in the context of some other releases which have had older transfers overhauled of late, this isn't really a valid excuse. Featuring both Dolby Digital and DTS soundtracks, this 5.1 mix is something of a disappointment. Initially, even on a calibrated sound system dialogue is difficult to make out, with the centre channel coming through as weak, undefined and compressed. Although things do improve, the soundstage is largely confined to the front three channels. Steering here is nothing more than average, with imaging slightly muddy to my ears and a general compressed feel to the sound. The surrounds come into play when Tangerine Dream's musical score fills the room, but otherwise they remain largely silent.

LFE usage is restrained with gunshots and explosions underpinned only lightly by the subwoofer: even the smallest of woofers will surf through this movie.

Of the two sound mixes, DTS is the more forward of the two with a livelier mix, which doesn't sound quite as compressed as the Dolby variant; the highs are sprightlier and the lows have a little more thump, but to be honest neither mixes will set the world on fire.

First up is a feature commentary by director Kathryn Bigelow, which - unless you're an avid fan of the movie - will likely send you to sleep. With expansive gaps in the commentary, Bigelow's voice is perhaps too monotone and although offering insights into the conception and ideas behind the movie amongst other things, it's way too flat and...well boring.

Much better is the 47 minute documentary on the making of the movie, which is primarily a set of interwoven interviews with Bigelow and the main players of the cast. Running through the movie from the initial ideas, to the casting and shooting, this offers some interesting material and is a worthwhile watch.

Rounding off the package are a set of 5 storyboard scenes - accompanied by a musical score - which really is rather missable, 2 theatrical trailers, filmographies, a stills gallery. Finally we have an interesting deleted scene with commentary - not because it's any good but because of what Bigelow was trying to achieve.

Overall a reasonable package: not a vampire feast but neither are they slim pickings.An offbeat, alternate take on the vampire myth, this DVD is let down by a poor video transfer and sound. Still well worth a watch however.