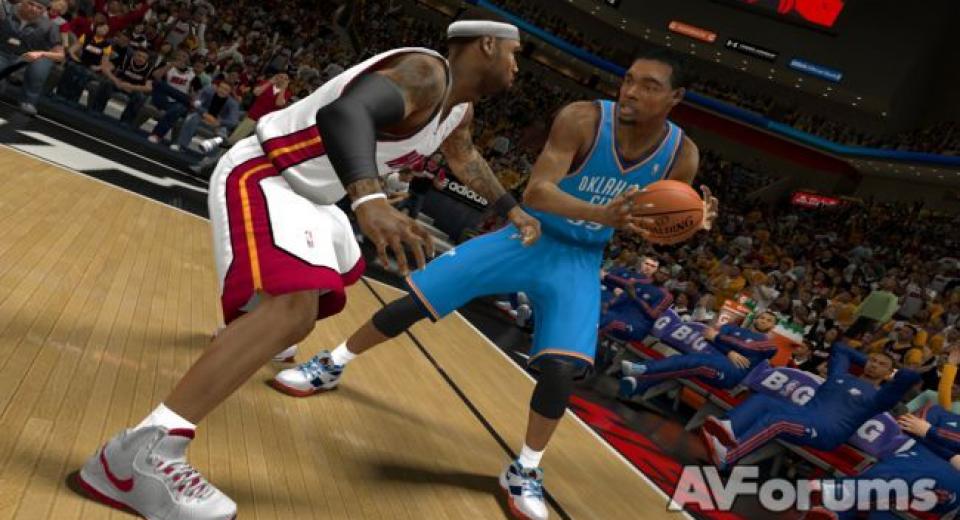 If you’re one of those people worried about the increasing monetisation of videogames through the slightly-dubious nature of microtransactions, you’d best steer clear of NBA 2K13. Every aspect of progression in 2K’s finest sport sim is now centered around a single currency system, and it’s one that can handily be purchased with real-life cash whenever you feel the need for a quick boost. Of course, upgrades can be ground out without delving into your own pockets to fund the stats of your virtual players, but at the same time, the precious commodity that is VC (Virtual Currency) is doled out so slowly in 2K13 that it’s almost painfully obvious as to the developer’s goals.
That’s a bit of a shame, as in almost every other respect, this is easily one of the best sports offerings of the year. Whether you’re looking to play a quick game with friends, delve into your own fantasy team or sculpt a career from a lowly draft pick through to the hall of fame, 2K has you covered with their nuanced, deep and hugely impressive on-court simulation. The tweaks that they’ve made to isomotion and shooting controls integrate well into the standard layout, and there are fewer jarring animation transitions and out-of-context on-court motions than in previous years. As ever, the list of detailed player resemblances and accompanying individual animations grows with every iteration, and as such 2K13 is better on the presentational front than ever before. Glancing at any given match-up (from a distance anyway), it’s difficult to discern the differences from real-life coverage at times.
This year’s major control alterations also serve to make NBA 2K13 a little easier for newcomers and more rewarding for veterans alike. Isomotion jukes, spins and tricks have taken a lead from EA franchises and are now mapped directly to the right analogue stick, whilst shooting controls are accessed on the same stick but with left trigger pulled (shots are also a mite more forgiving than they were before). In short, it’s a system that works beautifully well, although at times 2K13 does still suffer an over-abundance of button and stick combinations at the expense of accessibility. At least this year - although the available moveset has increased - the complexity of the basics are toned down to a level that’s easy enough to comprehend with a little patience, a thorough knowledge of the in-game tutorial (parts of it, anyway), and enough practice time without any opposition. As perhaps the best showcase for those newly-found or rejuvenated skills, 2K’s updated career mode takes priority of place on the main menu, and continues to build its premise around the appeal of NBA stardom from grass roots right up to the hall of fame. And what a mode it is.
The detail in 2K’s career simulation is staggering to behold at times. The draft is a tense and nervous affair, the commentary in each game is tailored to your performance and also your off-the-court activities, and the staged media interviews after every game allow you to build relations with your teammates and fans that help boost your appeal and performance levels. Play well and you’ll eventually earn yourself a starting spot, and from there it’s down to you to impress the coach, earn yourself endorsements, play through drills to improve your abilities, train with star players, negotiate with the GM, earn stat boosts in your chosen specialty and eventually break into Hall of Fame reckoning at the end of an illustrious period in the spotlight
As a self-confessed ‘be a pro’ sports junkie, NBA’s career system is absolute mana from heaven, and in combination with the improved controls this year, I’ve rarely found myself outside of those confines. It’s immersive and often intriguing, with the only downside stemming from a dearth of those all-important VC points with which to purchase training camps, stat boosts and equipment. There are several ways in which you can maximise your profitability on that front, but the mini-goals that are set within each game (make a number of passes, shots, rebounds, interceptions or contribute to your team in some other way) can be a complete pain to achieve when your pro is fresh out of college. There’s always that ever-more-tempting option to just spend real-life money of course, but in the interests of science that option is left untouched on my Xbox as of the time of writing. On a positive note, that single unified progression currency at least means that you’ll always feel some level of achievement even if you do leave your career on hold for a few games, and you’ll be rewarded VC no matter where you ply your trade in 2K13’s litany of gameplay riches. Online modes have been improved to the point that they’re decently playable this time around, with the team-up games suffering only slightly in terms of persistent lag. They’re supremely enjoyable even with that slight delay that often plagues them, and the new MyTEAM mode does its best to recreate the success that EA has encountered with the sticker-pack Ultimate Team orgy in its core sports franchises. Unsurprisingly, the packs of players can be purchased with VC, which leads you to cold, hard cash if you want to get ahead quickly.
Besides that somewhat dangerous trend then, the only notable disappointment with the core modes this year is that both the Jordan Challenge and the Legends mode have been summarily ejected, with the headline additions in 2K13 coming with the inclusion of the 1992 and 2012 Dream Teams and the arrival of Jay-Z as ‘executive producer’. What that means in practical terms is that the rapper seems to have had free rein in song selection, that the menu and atmosphere is far more bombastic than previous titles, and the occasional ‘inspirational’ promo video finds its way into the presentation from time to time.
As an unfortunate by-product of that type of deal however, the over-saturation of endorsements in 2K13 does leave a little bit of a bad taste in the mouth for those of us not fully immersed in the material excesses of the sport and accompanying “lifestyle”. Where Legends mode and the Jordan Challenge brought proceedings back down to earth and gave the impression of an honest love of the game, 2K13 - at times - feels a little too opportunistic in its marketing and comes across as slightly shallower in its nature. In conjunction with that controversial introduction of Virtual Currency across all game modes, NBA 2K13 may well be delivering a warning shot about the future of sports gaming; and it’s one I’m not entirely comfortable with in full-price retail releases.
In the interests of balance, it may also be worth noting that I might be in a minority on that front however, and if you’re heavily into the moneyed-up culture surrounding the sport and the players, you might not bat an eyelid at the eye-watering commercialisation.

NBA 2K13 prevails despite any misgivings about its morals anyway, and it does so because the underlying basketball simulation is brilliantly detailed and accessible enough to warrant investigation from all quarters. That it ships with arguably the best singleplayer career mode in any sports game is a bonus that cannot be underestimated, although it has to be repeated that it’s a bonus that might find its appeal waning if they continue down the path of meagre in-game currency rewards with a cheap real-life cash alternative readily available. If they get that balance right however, EA had better have something incredibly amazing waiting in the wings with NBA Live 14, because 2K shows no sign of stopping.