Nausicaa Of The Valley Of The Wind DVD Review 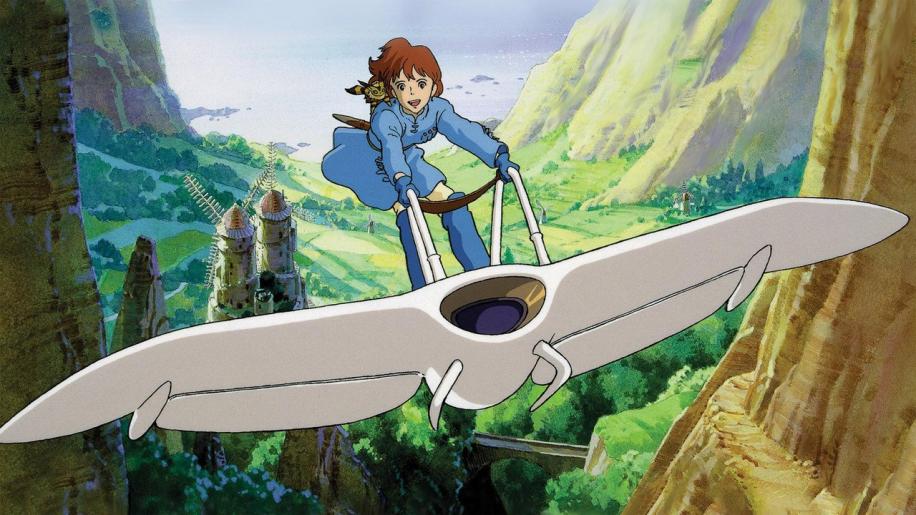 The picture here is rich in colour with no bleed at all and there is very little grain of note. It is a little flat and two-dimensional looking, but this only adds to its charm and is never really distracting - this is anime, after all - and the fact that the movie dates from 1984 means what we have here is nothing short of remarkable. It can never hope to compete with the likes of Disney's A Bug's Life, but one would never expect it to - this is old school, by comparison, drawn with a deft touch before computer-led graphics imagery ruled the world of animation. The audio track included is a Dolby Digital 2.0 mono affair that will in no way test the abilities of your home cinema amp or speakers. It seems a stereo track was being developed, but the powers-that-be decided that the mono track sounded better! So, there are two choices - Japanese audio without subtitles or Japanese audio with Japanese or English subtitles. It is a shame that the commentary included is not subtitled, though; so unless you can understand Japanese you will miss out on the many insights that I suspect are included regarding the making of this classic title. It is also a fact that there is some background hiss, especially if you attempt to listen at anywhere near reference levels. But such volumes aren't necessary here and the mono recording at least gave me the opportunity of playing with my amp's settings to see what could be achieved with its DSP settings. I'm sure I would have scored the extras higher had the audio commentary had English subtitles. Having said that I'm also sure that I would have scored them lower, but for the fact of a rather natty feature; the movie is included a second time on disc two (minus subtitles) where it is possible, by pressing the “Angle” button on your remote control to branch between the storyboard animation and the final version of the film. I have never encountered this feature before and the fact that the DVD cover and menus are in Japanese means I rather stumbled into it here! I found it well worth watching the transition from sketch to finished animation. Hayao Miyazaki's anime title is given a worthy DVD release, which looks good and comes packaged in a two disc hinged amaray with a zipped nylon outer case. Why? I have no idea, but I'm sure it will appeal to those who like their DVDs to look different!

A good storyline and some classic animation can't hide the fact that this title will, I suspect, appeal to different people in vastly different ways. Anime enthusiasts will be more than happy to own this release of Nausicaa Of The Valley Of Wind, whilst those new to the genre may be left wondering what all the fuss is about. For me there is no escaping that a DD5.1 audio track would have transformed my movie experience - which, I guess, merely indicates just how spoilt I have become.