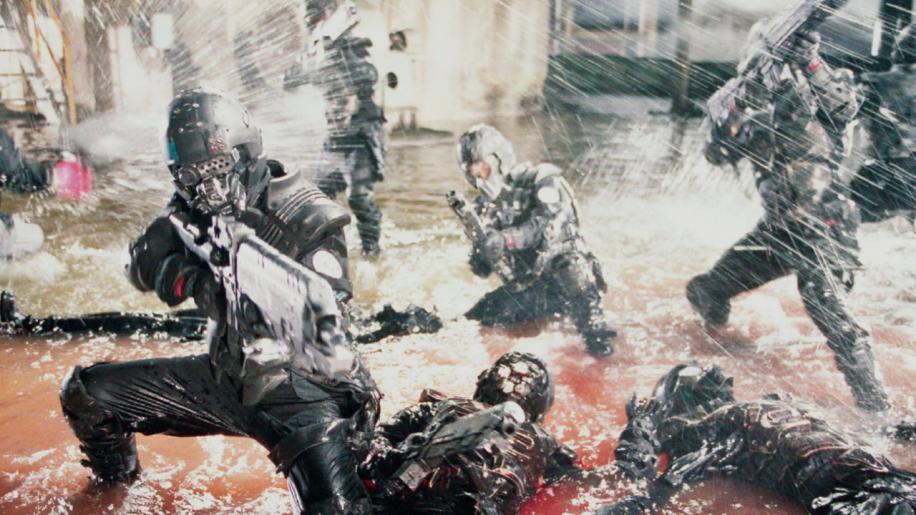 Natural City is not, as you may suspect, a David Attenborough narrated documentary about the insurgence of urban foxes. Rather, this is a quite inspired re-imaging of Ridley Scott's seminal Blade Runner. The twist, here, is that Natural City is South Korean so we are treated to some rather oriental flavours. I get ahead of myself; I should really give a brief synopsis of Natural City.

Natural City is set in the moderate future sometime after a nuclear war. Some cities were abandoned as sea levels rose, while others became landlocked, destined to decay and rot. The eponymous Natural City is just such a landlocked place full of history and legends of the pre war era. Life is tough in such cities and so cyborgs are used as slave labour to make human life easier. Outwardly, cyborgs are no different to humans, save that they have an AI chip in their brain to control their nature and have an artificially short lifespan. Things become more complex when armed cop “R” (Ji-tae Yu) falls in love with female Cyborg Ria (Rin Seo) yet she only has three days to live. Can R find a cure for his love or will she die a premature and needless death?

Yes, this does sound like Blade Runner, doesn't it? There are some pretty blunt homage's to Blade Runner, too. Look at the noodle bar bathed in neon light and dripping rain. But there are differences, not least the tangible eastern flair this movie has.

The CGI effects showing the cyborg factory are stylishly realistic and yet maintain an almost Harryhausen animated feel to them. It doesn't matter that the effects are not the most realistic - the atmosphere they create more than makes up for it. There are also some alterations made to the live action elements. Some scenes are nearly monochromatic, while others have a jerky timing to them to emphasise emotional themes. This shows some original thinking from director Byung-chun Min in what could otherwise be an orthodox movie. The love relationship between R and Ria is tastefully handled too. Aspects of racial prejudice, sexual equality (female cyborgs are called “Dolls”) and plain human emotion are all present. Indeed it is refreshing to see a movie take it's time with these themes, especially a sci-fi movie.

What isn't too good are the fight scenes. These seem staid, sometimes using Matrix style “bullet time” effects. It isn't because these scenes are like The Matrix that makes them mundane, however. After all The Matrix was itself inspired by eastern wirework. Rather we have seen martial arts enough, recently, and seeing them here does not add anything to the movie's content. Positioned against the intriguing intro sequence, the martial art's heavy fights seem forced or expected, rather than necessary.