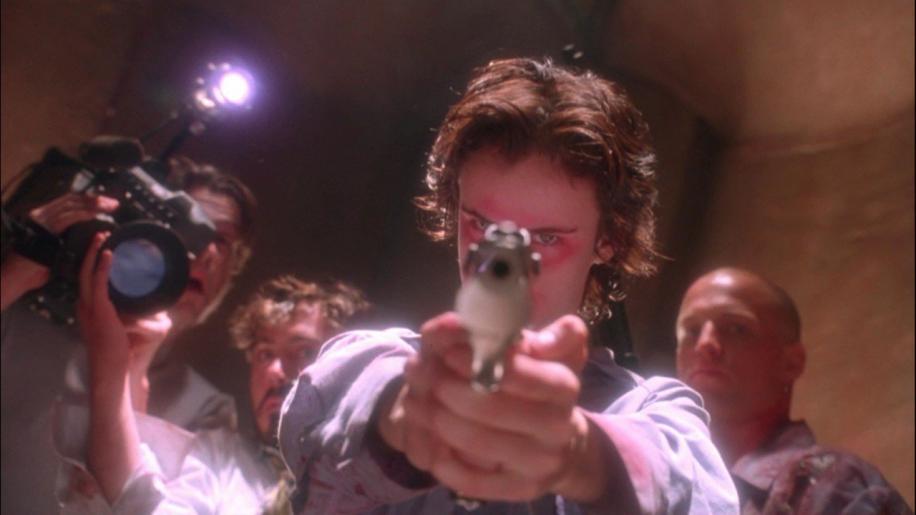 I could not think of a better time to revisit Oliver Stone's controversial Natural Born Killers than after having just reviewed Bonnie & Clyde. After all, the events of this real-life crime duo inspired - in no small part - Stone's modern re-telling, which basically tries to recreate the media insanity surrounding the crime spree as it would happen in modern times. Stone has created some tremendous epics - dissecting the horrors of Vietnam (both during and upon returning from the conflict), the conspiracies surrounding JFK's assassination, the Civil war atrocities in Salvador and even the corruption on the stock markets of Wall Street. Five of his best movies were made within the space of about five years, but that was two decades ago, and it's been a while since he has made a landmark movie. He tried no less than three times to get Alexander right, but none of the interpretations managed to do justice to the legendary tactician/warrior/king who literally changed the face of the earth. And it all started going wrong for Stone around the time he created Natural Born Killers, his most controversial and - arguably - most over-the-top production.

Mickey and Mallory live their lives by some twisted form of fate. After Mickey's delivery man 'rescues' Mallory from her abusive family, they go on a crime spree across the country, killing at random and always leaving one witness alive to tell the tale of their exploits. Their victims range from innocent cyclists to unsuspecting cops to loathsome rednecks to abusive evil-doers - the joy they get is more from the act of killing than from the choice of who they kill - and pretty-soon their death-count attracts the attention of the media, whose portrayal of them leads to public awe and infamy bordering on celebrity status. Can these two be stopped? And will any prison be able to hold them?

Stone's Natural Born Killers was an exercise in excess. Excess violence, sadism, abuse, torture, rape - and not just from the deadly central duo, but also from those who seek to capture, kill or even merely observe them. Beyond the story and characterisation, Stone also decided to film the production in a drug-induced, over-stylised way, with every single scene shot from multiple angles, using different filming techniques, desaturation, colour bleaching and film stocks to create a visually opulent but oppressive result. Now, back when this was released - nearly fifteen years ago - Tarantino was on a high, alternate filming styles, non-sequential timelines and shock value were all a big thing, a new thing. Tarantino's popularity has since fluctuated, the once-original scripting and filmmaking a much more common style that every wannabe has copied, some more successfully than others. If anything, we are now seeing a return to the more natural, classic storytelling of 'the good old days', with Michael Clayton, There Will Be Blood and Gone Baby Gone returning us to an ethos of substance and characterisation over style. With that in mind, it is difficult to avoid seeing Oliver Stone's interpretation of the Tarantino-scripted Natural Born Killers as an adventurous, avant-garde product of its time, which has since dated considerably.

To a certain extent, public opinion might have also - dare I admit it - matured slightly. Not only are we desensitised to these kinds of shock actions and violence, but we don't particularly want to see it unnecessarily flaunted in our faces anymore - at least not without a reason. And Natural Born Killers' very reason for existence appears to have long died. These days the public appears to be capable of seeing through the media frenzy at the core of this drama - if a serial killing Romeo and Juliet started a spree across the country, it's more likely some community-minded member of the public (who has been watching Batman too much) would turn the tables on them, rather than ask them for an autograph. And so we come back to comparisons with Bonnie and Clyde - why is it that it could stand the test of time when Natural Born Killers, a much more updated variation, seems lacking in that department? Both were products of their times, indicative of the way the public felt about things at that point in history, but whilst neither has relevance these days, both were landmark features. The difference between the two basically boils down to the fact that one has characters you like and one has characters you loathe. And after you've seen this psychopathic duo do their crazy killing dance one time around, you don't really even need to see it again. It's unpleasant, uncomfortable viewing.

As usual, Stone has managed to gather an eclectic bunch of actors with which to populate his movie, most of whom put a great deal of effort into their respective, colourful, performances, but all of whom get to portray highly unpleasant characters. Woody Harrelson never quite carried a movie for me, and here, as the smug psycho Mickey, he pretty-much proves that point - although this time it is probably more to do with the nasty character he plays than any fault of his own as an actor. Partnering him up with actress-turned-rocker Juliette Lewis doesn't particularly help, although - for one of the few times in her film career - she is actually the more tolerable of the pair. Still, that's not saying much. Tommy Lee Jones - having paired up with Stone for several other movies, gets a loud role as the crazy prison warden, and he hams it up in much the same way as Jon Voight does in Anaconda, although that - in a similar way - does not do much to elevate the film's worth, and Robert Downey Jr, who is so much fun to watch acting like he is just being himself in Iron Man, also goes beyond the line of duty for his role as the sleazy reporter who voyeuristically follows the murderous pair. Even Tom Sizemore, always reliable for playing a solid, meaty supporting actor, suffers by being possibly one of the least pleasant cops in corrupt cop history. They're all relatively good actors, some better than others, but they all suffer from the fact that their characters are impossible to like, respect or (hopefully) relate to.

Natural Born Killers served its purpose, shocking audiences with its satirical, polemic dissection of the media madness that was prevalent at the time and, simultaneously providing us with a unique (at least at the time) filmmaking style which startles the senses as much as the story is designed to provoke your mind. Society has changed a little - at least I hope it has - which makes Stone's statement less relevant today. But what really devalues the production is the fact that it is just plain hard to watch for a second time around. It is dated, abrasive and jarring to watch again, with very little likeable about the characters, the story or even the then-groundbreaking style. As a piece of filmmaking history, it has some considerable worth, but as a title you're going to crack out and revisit in your collection, it is destined to gather dust.