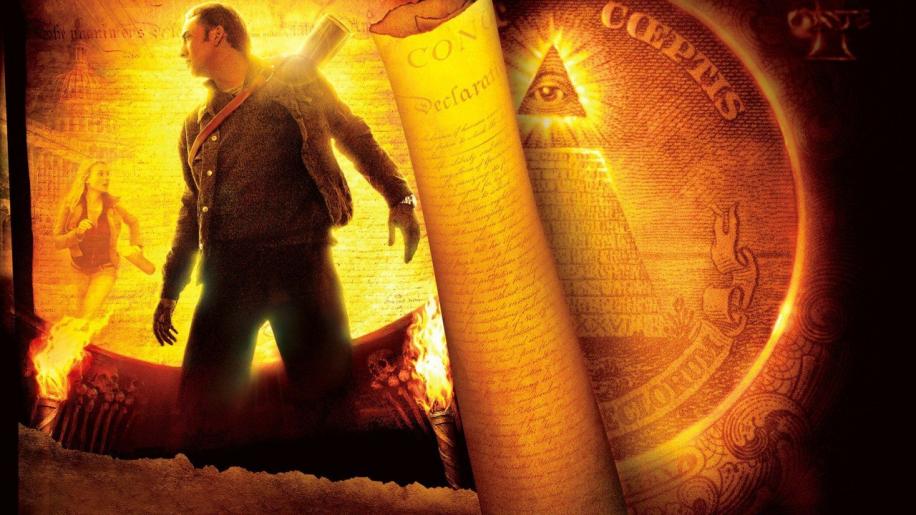 Nic Cage. Wild at Heart. Raising Arizona. This wacky, eccentric nephew of Francis Ford Coppola started off his career pretty well. He went on to play a very different character in Leaving Las Vegas, arguably giving his best performance to date, and then beefed up to do a series of fun action vehicles, the most noteworthy being The Rock and Face/Off. Of late, Matchstick Men and Adaptation were pretty unusual choices, marred only by a series of lacklustre efforts like the misguided Windtalkers and the poor adaptation Captain Corelli's Mandolin. Choosing to do National Treasure must have been something of a sell-out for Cage, making a poor man's Indiana Jones movie clearly just to rake in the younger audience members and make some money. But is there any chance it could still be worth watching?

Ben Gates is a modern-day treasure-hunter, coming from a long line of Masons descended from the Knights Templar themselves. When his team discovers that there is a map to a huge treasure encrypted on the back of the Declaration of Independence, his second-in-command - Ian Howe - decides that the best option is to steal it. Gates disagrees and the team is fractured, with Howe attempting to kill him and then fleeing to get his hands on the document. Gates attempts to inform the authorities - who ignore his pleas - but then, in his infinite wisdom, decides the best option is to steal the Declaration himself and get to the treasure first.

National Treasure is not a clever movie, the supposedly smart story is full of holes and incredulous ides, and does not hold up to any kind of examination. Now, normally this is not a problem if the visuals, script and performances all come together to keep you suitably distracted, but here the hold over your attention is tenuous at best. The action is implausible but vaguely engaging, but the overall production only really works if you switch the majority of your brain off and just go with it. Again, this works with some movies - but even for an Indiana Jones rip-off I would have expected more.

Nicolas Cage plays down most of his eccentricities for the role here as the treasure hunter Benjamin Franklin Gates. He still gets a little carried away at times, which only adds to the role, but you nevertheless get the distinct impression that he is on a leash, seldom standing up in a fight - playing it more comparably to Tom Hanks in the Da Vinci Code than Harrison Ford as Indy - and only becoming something of a distinctive character when he solves some of the many puzzles by thinking outside the box.

There are a few famous faces to pad out the rest of the cast, with Sean Bean wasted in the role of Gates' gun-toting former ally (who turns so quickly upon his friend you wonder why they ever worked together in the first place) and Jon Voight selling out as Gates' treasure-hunter dad (Christopher Plumber also has a brief cameo as the grandfather). Harvey Keitel - what on earth has he been doing for the last decade? - is also utterly wasted as the FBI Agent involved in the case. This was the man who came from the same method acting school as DeNiro, did movies like Taxi Driver, Mean Streets and The Last Temptation of Christ at the height of his career, tailed off with some lesser known but nevertheless enjoyable thrillers like Bad Lieutenant and City of Industry and then practically disappeared. It's nice seeing him in National Treasure, but only because it reminds you that this quality actor is still alive, even if he hasn't done a good movie in forever (cough DeNiro cough). Rounding out the significant cast members is Diane Kruger as the love interest who happens to be the official in charge of the protection of the Declaration itself.

National Treasure is pretty insipid, pointless stuff, vaguely engaging for its two-hours-plus-runtime , but at the end of the day there is simply nothing to write home about. It is the kind of thing you could stick on TV one lazy Saturday afternoon and do the washing up whilst it plays in the background. It's not that there is not entertainment to be found, it is the feeling that it has all been done before - and better - that often leaves you unsatisfied. Far from being a really bad movie, it is slap bang in the middle of a little place called mediocre.