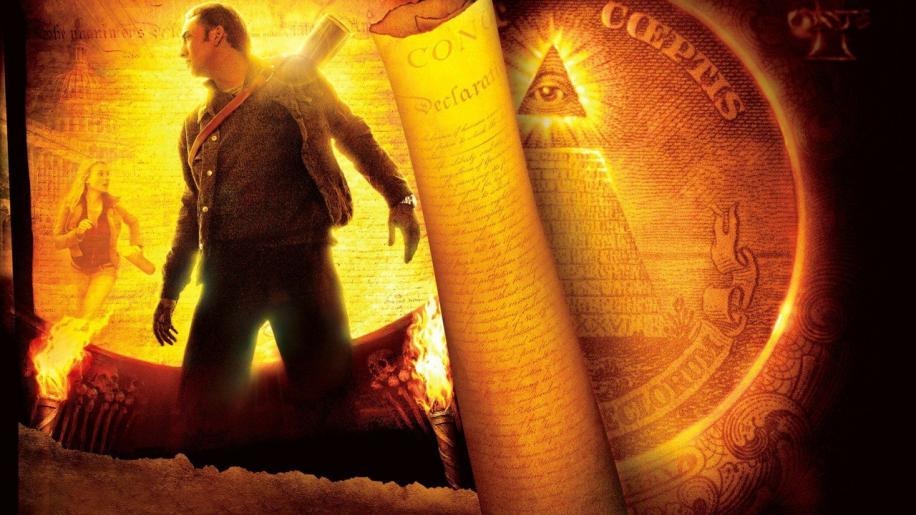 When I saw my name against National Treasure to review, I had to scratch my head and think “what's that?” It wasn't until I received the disc that I realised what the film was, the cover being the same shot used in the billboard advertising, of which I had seen. So it was with a totally open mind that I placed the disc into the player and watch. What greeted me was a slick, fast paced action adventure yarn, high on thrills, low on reality and one to put the fun back into Saturday morning cinema.

Benjamin Gates (Nicolas Cage) was told a fantastic story by his grandfather (Christopher Plummer) when he was very young. The story of a treasure plundered through out the centuries and too great for one single man, so was kept secret from humankind by the Freemasons. But when the ailing health forced one of the masons to take into his confidence Ben's great, great grandfather, the Gates family began the search and have been searching for it ever since; much to the ruin of their family and credibility with their peers. Entranced by the tale, from that moment on Ben too became a treasure hunter, much to the disappointment of his father (Jon Voight). Fast forwarding a few years, Ben has hired Ian Howe (Sean Bean), to help finance his expedition to the arctic, following the first clue. Once they discover it, Ben works out that the next clue is an invisible map drawn on the back of the Declaration of Independence, but when he refuses to steal it Howe takes command of the group and leaves Ben and his geeky side kick Riley (Justin Bartha) for dead. Of course they miraculously escape and in order to prevent Howe from stealing the Declaration, they themselves take it upon their own heads to steal it “doing what's wrong to do what's right”. During this robbery they befriend Dr Abigail Chase (Diane Kruger), who quickly becomes a co-conspirator, in a race against time fending off Howe and his group and staying one step ahead of the FBI hot on the trail of the Declaration. Such is the nature of the following run time, hopping from one clue to the next in an effort to stay ahead of the game, ahead of the enemy, ahead of the law, to try and find a treasure that most believe no longer exists, becoming ever more outlandish and ever more separated from reality.

National Treasure is rubbish. It has plot holes you can drive a bus through, the longer the film goes on the further from reality it becomes, the clues left behind by the Freemasons that have hitherto remained encrypted for 200 years are deciphered with alarming ease, not taking into account the impossibility of such a large cavern remaining undiscovered under Washington so close to the subway! However, that is not to say it is not an enjoyable film. As a cohesive whole, director Turtletaub, keeps the pace moving, added suitably by the cinematic efforts of Caleb Deschanel, and the racing score, the film maintains a youthful stance, remember the Saturday morning pictures? Well this film does, watch it with an ever increasing sense of disbelief and one can gain much from it.

There is little actual acting involved from the cast, Cage manages to maintain a credible hero, with enough drive and pathos to remain sympathetic. Bartha, for an intelligent computer geek has little more to do than say “ah ha, that's what you mean” and is nothing more than an exposition device. Kruger, apart from looking lovely too, has little to do other than remain a plot device. Bean is excellent as the villain, a part he has played a thousand times, but one he can nail to a tee. Old pros Plummer and Voight, retain their high ground while I was disappointed to see so little of Keitel, his Masonic FBI agent gets a very high credit for so little work.

I felt that the hand of Bruckheimer was played so heavily in this offering, sure it is big and bold, but it somehow lacks the clout that so many of his productions have. This adds to the feel, somewhat, giving the film a grounding rather than pandering to the audience. When researching the film, I found many critics drawing unfair comparisons to Raiders of the Lost Ark, while it can be said both films are adventure and maintain a Saturday morning serial feel, National Treasure plays out more like a video game; find the clues move on. In fact I came away thinking perhaps the Tome Raider films should have been modelled this way, might certainly have been more enjoyable for it. I must conclude by saying National Treasure is no where near as bad as most critics would have you believe, sure it's never going to be a classic, nor win any awards, but it is pure entertainment from beginning to end, and perfect if watched in a child like wonder frame of mind.