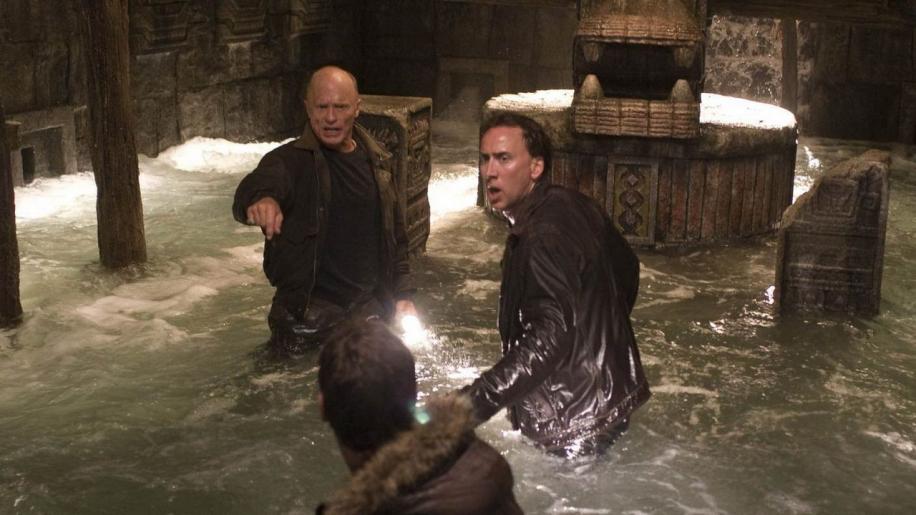 When I first reviewed National Treasure upon its original Region 1 DVD release I came to the conclusion that it was completely preposterous but harmless enough rubbish. However, my kids seemed to get a big kick out of it and the more it has been on the more I've come to appreciate how easy it is to watch, a true 'Saturday morning at the pictures' kind of film. So when it came to National Treasure: Book of Secrets (now called National Treasure 2: Book of Secrets) there was a deal of anticipation before the disc spun; from the kids as the 'new' film was here, and from me because I had to sit though more harmless rubbish.

The film opens on the day of President Lincoln's assassination; members of the Knights of the Golden Circle, a group dedicated to continuing the civil war and ruling with slavery, seek out Thomas Gates (Ben Gates' (Nick Cage) great, great grandfather) to decode a cipher, from the John Wilkes Booth Diary. Upon discovering the meaning and for whom the code was for, Gates tears the pages and burns them, but it costs him dear. Fast forward a hundred years, Ben Gates, along with his father, is giving a presentation about said events when Mitch Wilkinson (Ed Harris) stands to proclaim Thomas as a co-conspirator in the assassination, handing over one of the lost pages of the diary as proof. Outraged by the accusation, family Gates, long time friend and fellow treasure hunter Riley Poole (Justin Bartha) and, nearly separated from Ben, Abigail Chase (Diane Kruger) check the authenticity of the pages and discover the hidden cipher. Thus the code breakers are back in business, in a rush to clear their name and discover the fabled lost Golden City; the only snag? They need the information in the Presidents' Book, the Book of Secrets of the title, a book only for the Presidents eyes, so the only one course of action? To kidnap the President.

As can be surmised from that short plot description, National Treasure 2 treads the exact same path as its predecessor, Gates and his team follow a line of bread crumbs, working out clues left behind by historic figures before the bad guys can hunt them down. What I found though is where the first film had plot holes big enough to swallow a planet, the writers have now honed their art and created a similarly fantastic story but made it somewhat more believable by reigning in (some of) the impossibility. The clues are kept within the realms of possibility (excepting the inscription on Lady Liberties flame) and even has parts of the puzzle already been discovered. By mixing historical fact with plausible fiction the creators have laid out a credible path for our heroes to follow. Of course the final resting place of the Golden City is as ludicrous as ever, traps and all, but there is never a wavering of that sense of fun so prevalent in the franchise.

Nick Cages continues to play Gates with a wink and a nod to the camera, he's there having fun, but does have the chance to put his acting hat on during a passionate speech to the President about his sincere wishes. All the other actors acquit themselves as before, none are really stretched, Voight and Mirren (Gates' dad and mum respectively) showing they have a great chemistry and comic timing between them. Heavy weights Harris and Keitel, don't really have much to do and, in a film such as this, do look a little lost; Keitel playing little more than a cameo, but it's good to see the old fella is still around, let's hope he can get back into the big league soon. Director Jon Turteltaub, like the original, keeps the pace nice and high, rocketing along with thrills and spills, never allowing any real character time or development. However, at just over two hours is still feels that long, it doesn't have that edge, exciting though at times it can be. You do need a reasonable suspension of disbelief, it does help with some of the more outlandish ideas (just how much destruction can you wrought on London's streets and still not alarm the police, yet flying a radio controlled helicopter in Paris is a bookable offence!)

The omnipresent hand of Bruckheimer is once again felt with ever slick productions values and over the top action, though there is little of the cheese he is also famous for (I can forgive the final reconciliation because it seemed right), but without his backing, persistence and money, I'm sure some of the amazing locations would not have been achievable (Buckingham Palace and Library of Congress for example). The scope of this sequel feels far broader than the original but still distinctly familiar; just how a good sequel should be, keep everything the same but just different enough to engage. Ever the eye for a good thing, timing being one of them, Bruckheimer and the rest of the creative team pack the film to the gills with energy and excitement and let it go; imagine a bunch of children revved up on coke on a roller coaster; full of energy and fizz but never wavering from the tracks until the predictable ending. It is not a bad film, but it is not a good one either; it complements its prequel and is a decent enough addition to the franchise and with the open ending it looks like we may not have seen the last of Ben gates. If they can keep up the momentum then, rubbish as they are, the National Treasure team will continue to roll on.