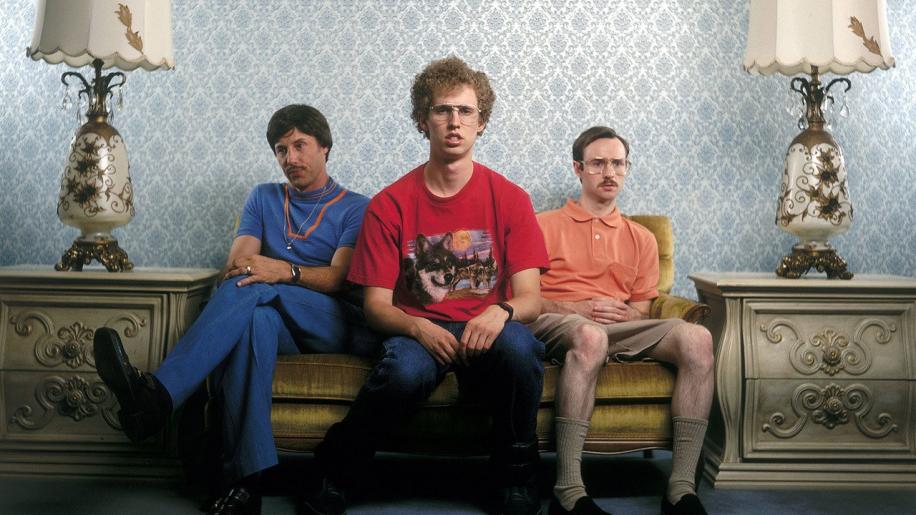 Napoleon Dynamite is a film that divided audiences and as a reviewer on AV Play once said, it's like Marmite; you'll either love it or hate it. I fall into the “love it” category as it was one of my favourite films of 2005 yet its hard to explain what it is that makes it so great.

Napoleon (Jon Heder) is a geeky teenager from Idaho, where very little ever happens. He lives with his Grandmother (Sandy Martin) and his equally odd older brother Kip (Aaron Ruett). Unfortunately for the boys their grandmother is injured quad biking (!) and their Uncle Rico is summoned to look after them despite their protestations. Napoleons school life is not much better, as being a flame haired geek does not fly at high school. However he soon finds an ally in Mexican student Pedro (Efren Ramirez), someone who is just as much of an outcast as him. Indeed in meeting Pedro, Napoleon now has a purpose at school as he aims to get Pedro elected as class president against the popular head cheerleader Summer (Haylie Duff). In amongst all this, Napoleon must deal with the upcoming school prom, the girl he likes and having to deal with his troublesome Uncle Rico. Now although this may sound like your regular American teen comedy, you'd be very wrong, it's just so odd and quirky compared to anything you've seen before. It would be fair to say that Napoleon Dynamite has a charm all of its own.

This is a film that definitely struck a chord with audiences, as its $400,000 budget was translated into almost $45,000,000 at the box office. Clever marketing ensured its success and it swept the boards at the MTV Awards which meant it also did very well on DVD as it brought it to the attention of those (like myself) who missed it first time around.

The root of the films success is without doubt Jon Heder as Napoleon, a part he totally nailed and one he will find hard to better. He plays a character that simply refuses to care what others think or conforms to survive the tribulations of high school. His delivery of the dialogue and his mannerism's are fantastic. For once in a teen comedy you are unsure whether the “hero” will get the girl or score the winning touchdown. Sure he comes across a slightly obnoxious at times, but he is so very endearing that you end up rooting for him. Jon Gries as Rico, also shines as the guy who wishes life had turned out a little differently. Efren Ramirez as Pedro is also very good, very emotive despite his monotone delivery. Director Jared Hess should be applauded as he has managed to find skilled actors who were able to deliver his funny dialogue. To be honest though, there is really not much of a story, only a thin plot holding the whole film together. As it stands it's really only a series of sketches, but it works. I reiterate however that it's not for everyone and I could understand if some just did not get “it”. However if you want a teen comedy that's just a little different and original then you have to check it out. Recommended.