Napoleon Dynamite: Like the Best Special Edition Ever! DVD Review 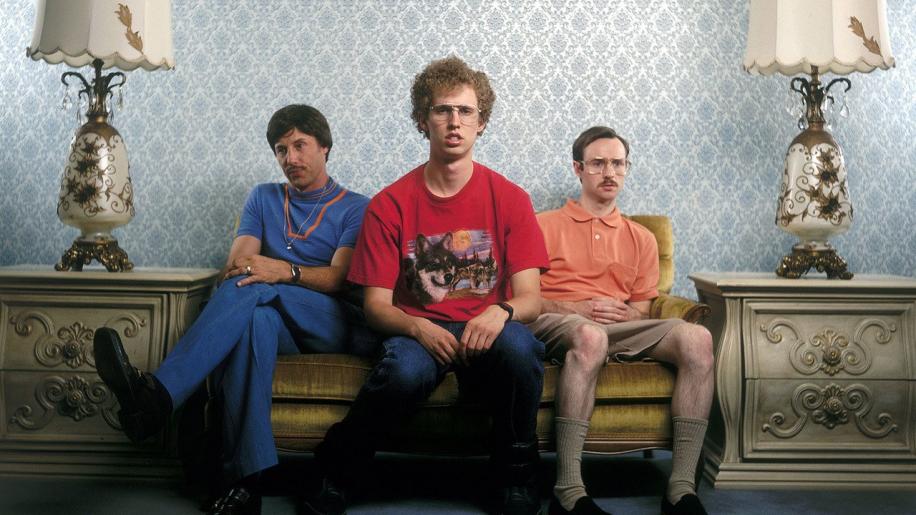 Presented in 1.85:1 anamorphic widescreen, Napoleon Dynamite on the whole looks great, very sharp and full of detail. No scratches or marks, but the odd scene contains some grain and softness but it's barely noticeable. It's very colourful which suits the tone of the movie and skin tones are consistent throughout. For a low budget movie, this is a pretty excellent transfer. Presented in Dolby Digital 5.1, this has a very satisfactory soundtrack. Almost everything emanates from the front speakers with only the odd effect chiming in from the rears. Its dialogue driven, not an action movie, and the dialogue was always clear and crisp, very well separated from the music. Again the soundtrack suits the movie perfectly. Also included are Spanish and French 2.0 audio tracks plus English and Spanish subtitles. Two audio commentaries: The first with Jared Hess, Jon Heder and Jeremy Coon and the second. This is quite low key but filled with character info, behind the scene stories and how the film came together. There is also an all new cast commentary with Tina Majorino, Aaron Ruell, Efren Ramirez and Jon Gries. This is good and one for the fans, as they reveal how they all got on as a cast and are quite funny throughout.

“On Location: Napoleon Dynamite” (41:31) is a really fun watch and has loads of back stage footage. "World Premiere: Jared Hess" (43:23) see the director before the premiere at Sundance and how events and his life changed after it, plus loads in between. Really excellent documentary and we see that it was a very personal film for Hess.

After this there are some deleted and extended scenes that also include some very funny outtakes, check out the juice scene in particular. Also included is some footage of Napoleons famous skills getting their first outing.

This includes audition footage for Deb, Pedro and Summer, plus an interview with the casting director. Following this is “Peluca” (8:42) the short film with Jon Heder directed by Hess that inspired the movie. MTV skits are next using Napoleon to promote TRL and the 2005 MTV Movie Awards, plus Jon Heder's appearance on Saturday Night Live, the 2004 Teen Choice Awards, 2005 Teen Choice Awards, Spelling Bee, and some Utah State Fair ads. Finally there are some still galleries, some MTV On Air promos of Napoleon Dynamite and to end there is “The Wedding of the Century” featurette which is the wedding of Napoleons brother Kip and LaFawnda his black girlfriend. A fantastic package overall for a really cool movie. If you're a fan of Napoleons sweet moves, then I cannot recommend this enough and I would double dip and upgrade to like the best special edition ever! If you've never seen Napoleon Dynamite I recommend giving it a rent first.