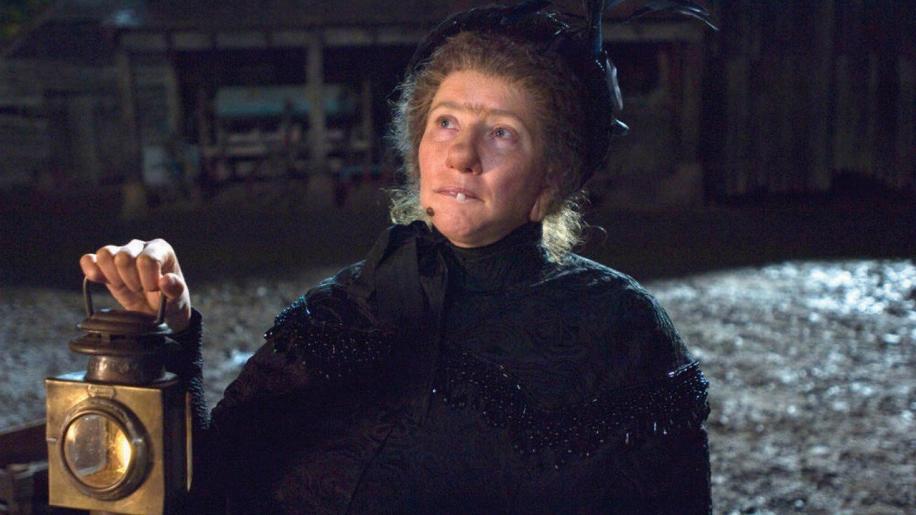 Cedric Brown (Colin Firth), the local undertaker has recently been widowed. Not only having to contend with the loss of his wife, Mr Brown has seven children. Now these children although clever are basically children from hell and have seen off 17 Nannies in a short period of time. The local firm who supplies the services of Nanny's has shut it's doors to Mr Brown and he is at his wits end. Enter Nanny McPhee, a quietly spoken old woman complete with warts, a dodgy nose and a buck tooth that would put a donkey to shame.

Nanny McPhee is played by the Oscar winning Emma Thompson (who also wrote the screenplay) she tells Cedric she will teach the children five lessons and then her job will be finished. Mr Brown has no choice but to give her the job and is constantly baffled as she always seems to appear from nowhere when she has something to tell him. This is a long running joke in the film where Thompson's character tells Firth “I did knock” when she appears out of thin air. The children immediately try to get rid of her after she appears to set magic on them after they tie the cook (Imelda Staunton) up and wreck her kitchen. Their only ally is the scullery maid, Evangeline (Kelly Macdonald) who always takes their side and is secretly in love with Mr Brown.

Nanny McPhee however is no mug and soon sees through the children's exploits and begins to try and straighten them out. Director Kirk (Waking Ned) Jones has made a good old fashioned children's film that could have been made at any time. The timeless qualities of the sets, acting and storytelling are simply enchanting. This is definitely one film any parent could have no worries letting their children watch.

Colin Firth although second billed takes a back step and lets the child actors shine. The supporting cast is terrific with scene stealing turns from Angela Lansbury as a rich Aunt with the best nose on screen since Gonzo in the Muppets and Celia Imrie as a serial marrying loudmouth with a horrendous taste in pastel colours. The production design is simply fantastic with a majority of the sets and costumes featuring bright vibrant colours.

Final word must go to Emma Thompson who is just simply brilliant as Nanny McPhee, her vocal command of softly spoken words is simply great and refreshing. Her make up particularly the warts are not only clever but gross at the same time. The fact that not only does she pull off one of the best performances in a kids film in years, she also wrote the screenplay for the film as well, now there's talent!!!