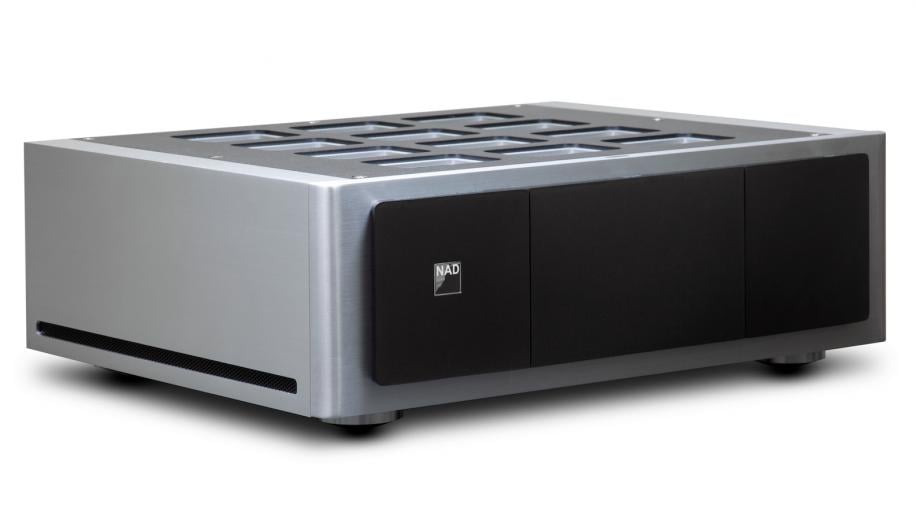 The NAD M28 is the company's latest seven-channel Class D power amplifier, and replaces the outgoing M27. The new amp looks identical to its predecessor, but is very different on the inside. The M28 now combines NAD’s Hybrid Digital design with Purifi’s Eigentakt amplifier technology, resulting in greater refinement, improved dynamics, and more power.

A lot more power in fact, with NAD claiming the M28 can deliver 200W of amplification into 8Ω when driving all seven channels, and even hit dynamic peaks of up to 320W. Connect the M28 to 4Ω speakers and NAD claims the M28 can produce 340W into seven channels simultaneously. That's a serious amount of grunt in anyone's book!

The M28 forms part of NAD's Masters Series of high-end products, and is designed to be used in conjunction with the M17 V2i AV processor. The M28 doesn't just match the latter's livery, it also has a fairly high-end price, and is currently available for £3,999 as at the time of writing (February 2021). However, if it sounds half as good as it looks, the M28 could be money well spent.

The NAD M28 looks identical to the earlier M27, and as power amplifiers go it’s a stunning piece of industrial design. The chassis is constructed from solid metal, with an eye-catching brushed silver finish and large ventilation holes on the top (even Class D generates some heat). The amp sits on four pointed feet, and NAD also includes magnetic shoes for those wishing to mount the M28 on top of something else without scratching it.

It's not often you say this about a power amplifier, but the M28 is a stunning piece of industrial design

The front is an exercise in minimalist elegance with a simple black facia, and an illuminated NAD logo. This changes from white for normal operations to amber for standby, and red if there’s a short circuit. However it's not a button, and the touch-sensitive on/off switch is actually secreted on top of the front panel. If I had one complaint it would be this control, because it’s hard to find, slow to respond and you’re never quite sure whether you’ve pressed it.

It would actually make more sense if the NAD logo was the on/off button, but I'm nitpicking here. Besides, if you're using the M28 with an AV processor you can simply connect a 12V trigger, and then you don’t have to worry about turning the amplifier on and off manually. The M28 has fairly compact measurements of 435 x 156 x 380mm (WxHxD), but weighs in at a hefty 21.2kg.

In terms of connections, the M28 offers seven phono RCA inputs, and seven corresponding balanced XLR inputs. You flick a switch to select one connection or the other, and there are little LED indicators for each channel. Under normal circumstances these should be green, but if they’re red, the channels are overheating. For each of the seven channels there’s a pair of gold-plated binding posts that accept 4mm banana plugs and heavy-gauge speaker cable. Finally, along with the 12V trigger there’s a button for dimming or turning off the NAD logo on the front, and a physical on/off switch.

The NAD M28's big selling point is its use of Class D amplification combined with Purifi’s Eigentakt technology. Audiophiles often criticise Class D because they feel its digital nature robs an amplifier of a degree of sonic fidelity. But Class D has certain benefits, specifically improved efficiency.

The problem is the filter required to mitigate the noise generated by the digital amp rapidly switching its output devices on and off, and a poor design can compromise its efficiency, reliability, and audio quality. The ideal solution is an amp that combines the efficiency and power handling of Class D with the responsiveness and transparency of Class A/B.

Danish company Purifi thinks it has the answer in the form of its Eigentakt amplifier technology, which not only addresses issues relating to the output filter, but also sports an almost analogue-like behaviour in the unlikely event the amplifier is driven into clipping. Whereas a traditional Class D design can become unstable under such circumstances, Eigentakt behaves more like Class A/B with benign clipping and an instant recovery.

NAD first embraced this Eigentakt tech on its M33 Masters Series streaming amplifier, and now the company has rolled it out to the M28 power amplifier. The improvements in efficiency and sound quality aside, the other benefit of this digital approach is the increased power output. As mentioned in the introduction, NAD claim the M28 can deliver 200W into 8Ω and 340W into 4Ω when driving all seven channels simultaneously.

The NAD M28 was reviewed in conjunction with a reference Lyngdorf MP-60 AV processor using XLR cables, and running a 7.2-channel system composed of MK S150 speakers and a pair of V12 subwoofers. As soon as I start running through some test content, it's immediately apparent that NAD isn’t exaggerating when it comes to those quoted power numbers, and this digital amplifier can drive the 4Ω MKs without breaking a sweat.

The recently released Blu-ray of Nick Mason’s Saucerful of Secrets gig at The Roundhouse provides an opportunity to test this amp's abilities with multi-channel music, and it doesn't disappoint. This disc sports a superb uncompressed 5.1 LPCM soundtrack, and the combination of the MP-60 and M28 does a wonderful job of breathing life into the concert. As you watch, you find yourself immersed in the crowd, and as the band works its way through a number of Pink Floyd's psychedelic classics from the late 60s, you feel as though they’re playing right in front of you.

This sense of realism is largely thanks to the amp's inherent responsiveness and transparency, allowing the surround mix to subtly highlight delicate touches such as the keyboard flourishes in See Emily Play, and Nick’s trademark percussive rolls on Interstellar Overdrive. At the same time, the amp has the dynamic power and sound staging to create an overwhelming sense of scale, giving compositions like Atom Heart Mother a suitably epic feel.

The M28 is certainly impressive enough to make those who are sniffy about digital amplification reevaluate their position when it comes to Class D. There's an exacting precision to the overall delivery that is sure to please even the most demanding audiophile. The film Free Fire is, as the name might suggest, basically one long fire fight in a warehouse, and the resulting 5.1 mix allows the sound designers plenty of opportunity to move gunfire and ricochets through the surrounds.

The soundtrack also boasts plenty of dynamic range, giving the high-calibre rifle fire a huge percussive hit that reverberates with echo around the warehouse. During the protracted shoot-out bullets ricochet off columns and zip across the room with an unnerving accuracy, and all this ballistic pyrotechnics demonstrates the M28's ability to be both refined and dynamic in equal measure.

The M28's abilities with dynamic range are perfectly put to the test with A Quiet Place, a film that goes from almost silent to very loud in an instant. The NAD immediately revealed its ability to turn on a dime, going from kitten’s breath to ear-splitting roar almost instantaneously. This is especially true during the scenes where the monsters attack, with their terrifying screams sounding wonderfully visceral. This amp handles all these transients with an accomplished precision.

However, for much of the film entire scenes take place in virtual silence, although the soundtrack is never actually silent. This is where the M28's nuanced subtlety and remarkable transparency come into play, and the sounds of buzzing insects or the wind rustling through the leaves can be distinctly picked out. There is also some very precise placement of effects, and once again the amp handles this with ease, ensuring accurate steering and localisation.

The M28's ability to deliver all this dynamic power when powering all seven channels simultaneously is also true, even when a soundtrack drives them hard. A great example is the first challenge in Ready Player One. The amp’s ability to simultaneously energise seven speakers is quite remarkable, and despite the frenetic nature of the race, each channel is perfectly represented. Despite the complexity of the mix, the NAD ensures the Delorean zooms effortlessly across the room, a wrecking ball smashes from left to right, and King Kong beats his chest with a thunderous ferocity.

The NAD M28 is a gorgeously designed and beautifully made amplifier that proves modern Class D is capable of far more than you might imagine. Purifi’s Eigentakt technology produces clean and transparent power that's delivered with precision and detail. It’s also incredibly responsive, with remarkable dynamic range and more power than you could possibly need.

The M28 isn't cheap, but it's a high-end product so that's to be expected. I also understand that some people might still prefer the sound of a more traditional amplifier. But this is a superb performer, and will perfectly complement the NAD M17 V2i or any other high-end processor.

In fact my only complaint is that NAD hasn't applied the same modular approach to the M28 as it has to other products in the Masters Series. The reality is that seven channels isn't enough these days, and even the M17 is capable of processing 11 channels. So it would be nice if you could increase the number of channels via modular upgrades as your system grows.

If you prefer Class A/B and like the idea of an amplifier that can be expanded to meet the needs of your growing system, the Emotiva XPA-11 Gen3 is definitely worth considering. This well-designed, nicely-constructed and competitively-priced range of amps can not only be bought in configurations ranging from two to 11 channels, but is also modular. So you can either buy sufficient channels from the beginning, or add more as your system expands. The Emotiva isn't as powerful as the M28, but it remains a very capable, responsive and transparent performer; plus it's great value for money.