My Week with Marilyn Movie Review 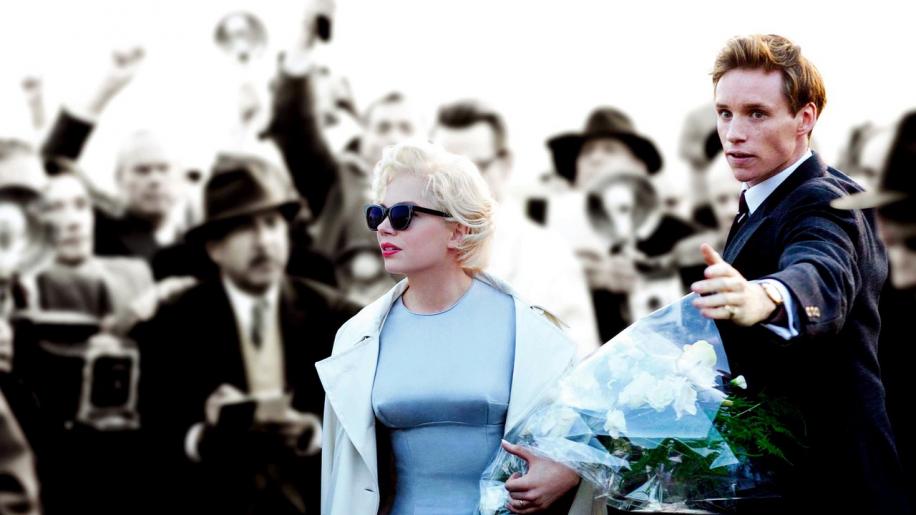 In her brief 36 years on the planet she spent over 16 years in Hollywood and made an average of two movies a year, starring in over a dozen of them. Yet both during and after this time scant few people could honestly admit to knowing the woman herself; the woman behind the iconic name and everything that went with it. You see she was not always a world-renowned sex symbol; indeed many would claim that “Marilyn Monroe” was nothing but a facade, a thin veneer protecting the fragile, damaged and vulnerable and very human girl beneath all the makeup, drugs and distracting dresses.

Born Norma Jean Mortensen, raised Norma Jean Baker, the girl-who-would-become-known-as-Marilyn-Monroe spent her childhood shuffling from foster home to foster home due to her mother’s mental instability. She first married when she was just 16, and was divorced by 20, after her new career as a model was met with disdain by her military husband. Modelling soon turned to bit parts in movies, often playing the dumb but sexy blonde, although a couple of performances showcased a broader talent, and eventually she managed to break through into leading roles. Still limited by typecasting she joined the Lee Strasberg Actors’ Studio in an effort to refine her skills through learning the art of Method Acting. With a second, volatile, marriage to Baseball player Joe DiMaggio under her belt, she married playwright Arthur Miller, but, as with all of her other husbands, there was always the pressure of living a happy, healthy family life and playing the part of The Most Famous Woman in The World.

My Week with Marilyn reflects upon the time Marilyn spent in England shooting a film directed by and starring Lawrence Olivier, The Prince and the Showgirl.

It’s 1956 and Colin Clark is a young university graduate who doesn’t know what to do with his life. His rich and prestigious family background dictates that he should take up a profession, but Clark wants to be involved in the movie business, and subsequently doorstops the manager of Lawrence Olivier’s film studio. Eventually, through perseverance and innovation, he lands a job as a gofer on Olivier’s latest film, The Sleeping Prince, which co-stars the world-famous Marilyn Monroe. As the production progresses, Monroe’s on-set behaviour tests the stamina of the crew and all of her co-stars, but Clark finds himself drawn to the seductive enigma, even though all around him warn him that he is going to his fingers burned.

Based on two books written by the real Colin Clark – The Prince, the Showgirl and Me, and My Week with Marilyn – relative newcomer Director Simon Curtis’s adaptation takes the same approach that the books did: diary accounts of a real period in history, told from a certain perspective, and narrow in the time that they cover, but subtly reflective of the inner workings of the iconic people portrayed within. Although not technically covering just a week, but indeed more like several months, the symbolic snapshot into the lives of Marilyn, Lawrence Olivier, Arthur Miller and even Vivienne Leigh go some way towards encapsulating a far broader portrait of these personalities.

Indeed it’s a credit to both the director and the source material that he was working with that the end result manages to paint quite a broad landscape within the confines of such a small story. Unfortunately, there is no denying the restrictions of this limited period of time, and the inherent problems with telling something of a coming-of-age drama set against the backdrop of these historical shenanigans. What we find is that, whilst there are hints of true insight, the overreaching arcs within are too slight to make for a grand, involving drama. Instead this is just a nice little period piece, reminding us of some of the greatest artists from the time, and teasing us with the tragedies, and trauma, within them all; often quite successfully covered up by their public personas.

Of course it was neither the intention of the original writer, or the director, to craft a tale which told the biographies of any of these real-life characters – not even Marilyn herself. Her tale has been told more than a dozen times before, and indeed there are plans to make a second Marilyn Monroe movie later this year called Blonde, and starring Naomi Watts (Hollywood’s famous “rule of twos” coming into play once again – however unusual the topic, Studios always push for two almost back-to-back releases to compete with one another: Armageddon, Deep Impact; Wyatt Earp, Tombstone; Volcano, Dante’s Peak etc. etc.).

My Week with Marilyn doesn’t even attempt to go over old history – it avoids her upbringing, her first marriage, and any mention of DiMaggio; it avoids the Kennedy controversy (which would come on the eve of her death) and, of course, it avoids her mysterious passing away – and instead gives us a glimpse into this icon’s life as perceived through the eyes of a naive young film assistant who gets to live what a generation only ever dreamed of: he got to work in the film business with Lawrence Olivier and Marilyn Monroe. Drawn by her effortlessly seductive nature, in awe of her star status, he sees hints of the damaged goods within – the difficult third marriage, the miscarriages, the insecurities, the simple girl yearning to escape the limelight – but is paralysed to do anything but worship her, for good or for bad.

However small scale the approach of this story – particularly when juxtaposed with more traditional biopics: from Ali to Nixon; The King’s Speech to The Iron Lady – there’s no denying that it carries some truly magnificent performances which are arguably reason alone for watching the film.

Michelle Williams has quite rightly gained some serious critical acclaim for her performance here as Marilyn. It’s a hard task, but not one that is beyond the talented young actress, who cut her teeth in Dawson’s Creek but has since gone on to provide not only some great supporting performances (including an Oscar Nominated turn in Brokeback Mountain) but also a few great lead performances, most notably being Oscar Nominated for Best Actress in the anti-romance Blue Valentine, opposite Ryan Gosling. She manages to do some standout Marilyn emulation – from pouting to smiling to the accent to the wit to the singing – but she also provides us with a glimpse at a far more complex character within. Apparently it’s a performance that’s been two years in the making – she signed on for the role long before filming commenced – and the end result speaks for itself. Marilyn may be too iconic a character for many Hollywood Studios, and many leading actresses, to go near, but Williams does a commendable, at times exceptional job at both paying tribute to the film star whilst also rounding her out behind the scenes.

The rest of the cast are predominantly British, with more theatrically-driven young actor Eddie Redmayne (Elizabeth: The Golden Age, The Other Boleyn Girl) taking up the part of the Colin Clark, who is essentially both the eyes of the audience and also a vessel for making the very dreams of the audience come true. It’s not the easiest part to play, and, as something of a vacant, hapless voyeur we do often feel like he does little more than leer his way through the proceedings, overwhelmed just by the fact that he is in such close proximity to a superstar. But perhaps this is only to be expected, and perhaps this was what the part called for.

The supporting roles include actress Dame Judi Dench (Quantum of Solace) as actress Dame Sybil Thorndike, Michael Kitchen (The World is Not Enough) as the Studio manager Hugh Perceval, Julia Ormond (Smilla’s Sense of Snow) as ageing actress Vivien Leigh, then married to Lawrence Olivier, and Dougray Scott (M:i-2) as playwright Arthur Miller. Zoe Wanamaker (Harry Potter and the Philosopher’s Stone) puts in a suitably irritating turn as the exceptionally frustrating Paula Strasberg, wife of Method Acting teacher Lee Strasberg, who took it upon herself to become Marilyn’s mentor, and Harry Potter’s own Hermione, Emma Watson, tries her best – but ultimately fails – to escape her Hogwarts roots as the girl-next-door love interest who soon finds herself in the shadow of Marilyn. There are even bit parts for Derek Jacobi (Kenneth Branagh’s Hamlet, Underworld: Evolution) and Toby Jones (Tinker Tailor, Frost/Nixon) thrown in for good measure.

However, by far the most noteworthy contribution comes from Kenneth Branagh, who has a part which was arguably made for him – he gets to play Sir Lawrence Olivier. Ralph Fiennes was originally cast but dropped out to direct and star in the critically-acclaimed Coriolanus, and I have to say that, however good Fiennes would have been, Branagh was undoubtedly the perfect choice. No stranger to over-the-top thespian dramatics, Branagh perfectly balances Olivier’s famous dominating outward persona with some quite subtle chinks in the armour that display the ageing, uncertain and maybe even a little bit insecure psyche within. It’s a tour-de-force, larger-than-life, scene-stealing performance which makes you almost wish he was doing his own movie about the lauded actor’s colourful life on stage and screen.

Whether you’re watching it for Williams’s Marilyn or Branagh’s Olivier, they are both thoroughly deserving of their Awards and Nominations, including respective Best Actress and Best Supporting Actress nods from the Oscars.

Even if it may not afford viewers a wealth of information about the lives of all the famous stars depicted here, My Week with Marilyn remains a little gem; a small-scale film with a warm heart, which blends the true life tale of a dream come true, adding strands of coming-of-age drama, romance, psychological drama, biopic and period piece all into the mix. Throw in some not-to-be-missed performances, along with some hints of intriguing insight, and there are plenty of reasons to spend your night with the latest tribute to the iconic Marilyn Monroe.