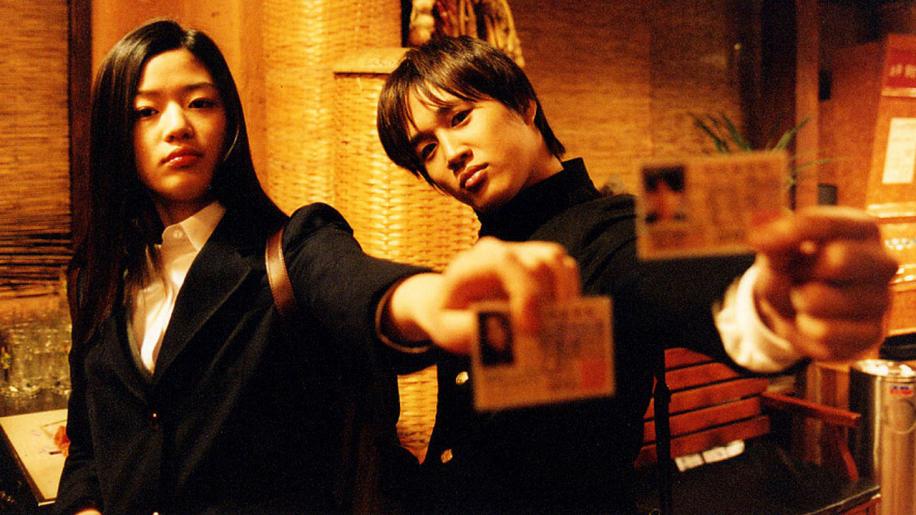 Told largely in flashback and even then further divided into convenient First and Second Halves, Kwak Jae-yong's romantic comedy is about as far removed from any of its Hollywood counterparts as you could possibly hope to get. Smart but lazy student Gyeon-woo (an immediately likeable Cha Tae-hyun) can't help but hit upon any girl that fits his type. But the object of his latest infatuation could seriously damage his health. Going without a name throughout the entire film, this young girl (a quite remarkable performance by Jun Ji-hyun) seems hell-bent on drinking herself into oblivion and creating chaos wherever she goes - impromptu fashion tips to innocent passers-by tend to devolve swiftly into snarling death-threats and many horrendously embarrassing situations for her poor bewildered suitor ensue. Suffering, Gyeon believes, from the grief caused by a prior relationship, he nevertheless resolves to help heal her pain. As a result of this foolhardy mission, he is subjected to all manner of degradations and even arrested on a couple of occasions. This warped relationship is further complicated with the girl's complete lack of romantic interest in him, despite her devotion to having him around as her own private whipping-boy. Like a loyal lap-dog he is always there for her throughout her tantrums, belittled, humiliated and even physically abused in the course of her crazy schemes. She is the perpetual tease, dangling her sexuality before him like the proverbial carrot on a stick. But, as the tale progresses, it becomes apparent that there is far more lurking beneath her wild façade as glimmers of heartbreak and loneliness shine through, giving Gyeon an aching nobility in his insane quest to reach the innocent and vulnerable girl locked within. The girl is literally an itch that he cannot scratch and with each new set-piece drama we, too, are drawn deeper and deeper into the mystery surrounding her. By turn irritating and alluring, the girl is an enigma, typified by Gyeon's almost voyeuristic attentions to her whilst she sleeps off yet another drunken binge.

“Why were you naked in a motel with me?”

Director Kwak Jae-yong manages to keep the First Half fairly light and breezy, with an emphasis on slapstick, albeit buffoonery that ricochets around in the leftfield. The girl wants to write for the movies and allows Gyeon to read some of her screenplays. We get to see this material acted out in a series of playful fantasy sequences - there is the almost obligatory Matrix-style shootout, an epic period martial arts duel and a bizarre rewrite of a Korean folklore classic - but it is quite clear that the missing elements to all of this are heart and soul. It is almost as though these crucial features have been removed from the girl, herself. But it is not until the largely bittersweet Second Half that the relevance of all this will become apparent.

“Some day, I'll meet someone from the future.”

It is with the above quote that I detected the underlying resonance at the core of the movie. Up until then I had found the proceedings intriguing and occasionally amusing but emotionally redundant. The characters were baffling - just why would two wildly different personalities become so drawn to one another? Why would anyone put up with as much grief and heartache from someone as unstable and volatile as the girl Gyeon falls for? Did it really need the sledgehammer scene of the renegade soldier holding the pair hostage to ram its heartfelt plea home to us? But then events take that pivotal turn that suddenly makes all that has gone before fall into place and all the more worthwhile as a clever screenplay finally reveals its hidden motives. Obviously, I am not going to say what happens, but let me assure you that the emotional connection I had believed missing from the movie had indeed been there all the time, bubbling away almost subliminally just beneath the surface. The mood swing that takes place is a necessary one and leaves an indelible imprint afterward. I loved the unravelling notion that Fate is pulling all the strings, an incredibly powerful force that is impossible to elude. The denouement may feel a little stretched out but it is like the calming of the sea after a storm, smoothing over all the madness and turning everything full-circle. It's hard to imagine a similarly-themed western film achieving the same level of poignancy and understanding without being laughed off the screen.

“We promised to meet here two years later ... but she hasn't come yet. I'm going to wait.”

My Sassy Girl is certainly an oddity. Don't be lulled by the lovely lilting score that greets you. The movie can be edgy, awkward and confrontational. With a fresh premise and an offbeat script and a couple of very enjoyable performances it injects a terrific dose of originality into a tired and clichéd genre. Plus, it might make you think twice the next time you see someone stumbling drunkenly around the subway. Not something that you would watch often but certainly a competently made comedy that turns into something much deeper and more thought-provoking the more you stick with it. It would be interesting to see what a Hollywood remake would be like. Then again ... no, it wouldn't.