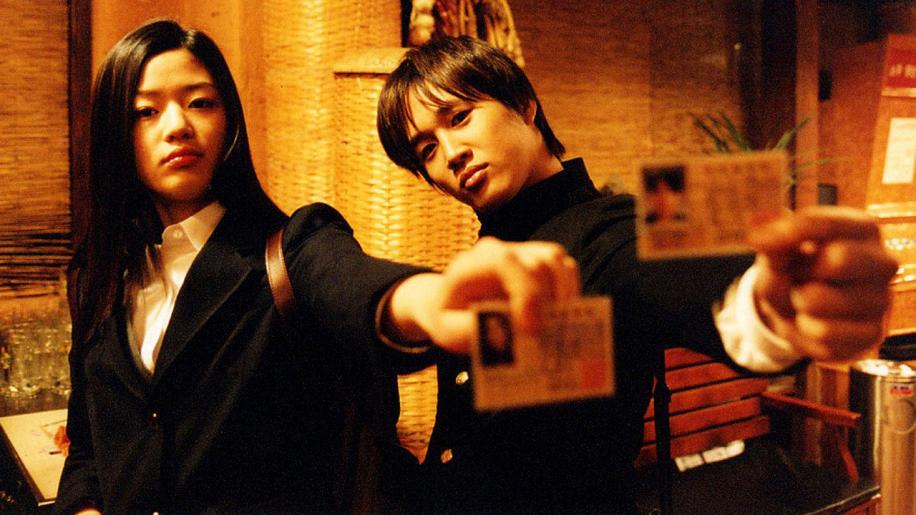 The visual transfer of My Sassy Girl's 1.85:1 image is perfectly adequate without being exceptional. Colours are nice and warm, though often betray the slight softening inherent from an NTSC transfer. Nothing too detrimental there, though. Clothes and scenery always look fresh, skin tones are realistic and consistent and the overall picture is suitably alive with a reasonable degree of detail on offer. It's funny how a scene that is submerged in rainfall can often be the most eye-catching and there are a couple of great ones in this. The disc handles them impressively with lots of luscious detail caught in the downpour. Black levels are satisfactory too, adding a good sense of depth and contrast.

However, there is a fine layer of grain that will become more apparent on larger screens and the occasional element of print damage sometimes invades the picture. There is the odd NTSC judder on sideways motion and camera movements, but I have seen far worse. Blissfully, edge-enhancement is kept to a bare minimum and no other digital gremlins reared their ugly heads. Overall, the image is quite pleasing without trying too hard to showboat. I believe that there is a version of My Sassy Girl with full surround sound but the one that I am reviewing has only a 2-channel Dolby Digital track in its original Korean on offer. Although always clear and strong and featuring the odd moment of steering across the front soundstage - the girl running from the right to vomit over in the left, for instance - I found the mix to be slightly disappointing. Given that this is a fairly recent movie (2001) and does have a fantasy gun-battle as a highlight it would have been nice to have heard it in full 5.1. As it stands though, there is precious little to mark it out as anything other purely standard. Surely a shame for such a sparky and energetic movie. If you count a dreary Photo Gallery, Theatrical Trailer, Cast and Crew Filmographies and the Music Video to the signature tune of “I Believe” as anything special then you can add another mark to the total. There is a 2-disc edition of My Sassy Girl out there somewhere which even has the afore-mentioned 5.1 sound mix. That also contains the Director's Cut that I have reviewed here. If you are fan then obviously you should track that one down. A fresh, vibrant take on the traditional rom-com, given a great Korean slant that immediately places it head and shoulders above the usual home-grown fodder. Difficult and uncomfortable at times and containing perhaps an unhealthy dose of slapstick in its First Half, it nevertheless worms its way under your skin with affecting central performances - particularly from Jun Ji-hyun - and a terrifically powerful closing segment. Maybe I'm just a big old softie at heart, but the deft manipulation of the emotions and the rug-pulling worked a treat on me. But, in all fairness, the movie did needsomething a bit deeper to haul it out of the doldrums of endless farce that were in danger of drowning it altogether.

That said, however, if you are going to take the plunge, my advice would be to go after the 2-disc edition. Not sure exactly what is on the extra disc but it has to offer more than this somewhat forlorn release.