My Neighbours the Yamadas Movie Review 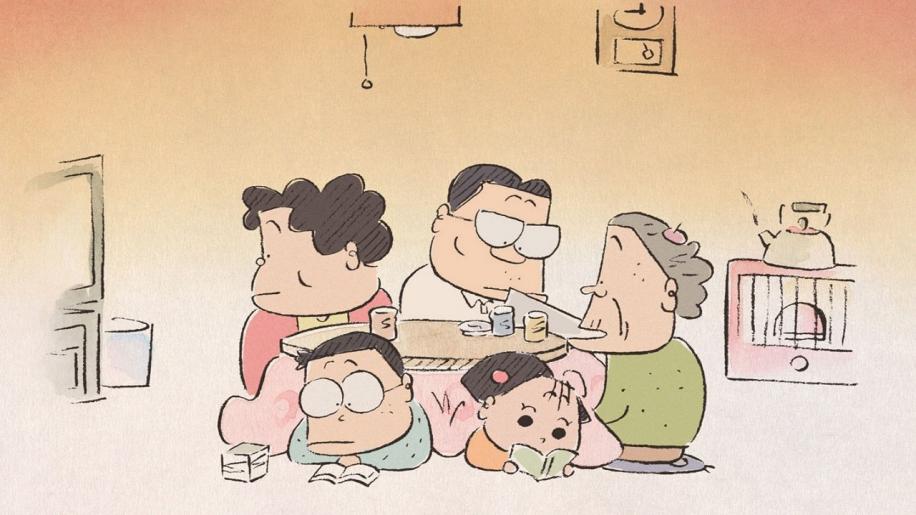 My Neighbours the Yamadas Movie (1999)

An oddity at the time, and still arguably one, My Neighbours the Yamadas to many, goes against the grain of what a Studio Ghibli film was/is. The standard gloriously animated visual, dynamic movement and intricate background artwork are nowhere to be seen, but rather replaced with simplistic caricatures and half filled watercolour frames. The roots of the Isao Takahata film are similarly different to the usual cinematic and soaringly adventuristic Ghibli fare – based on the serialised comic strip as first seen in the Asahi Shimbun paper, Nono-chan was later to be collected in manga compendiums. It told the tale of the ordinary, everyday trials and tribulations of a standard middle class family living in a present day suburb of Tokyo. Hardly in keeping with a studio known for its output of material that hinges on glorious flight sequences, sumptuous eco-themed visuals and spectacular finales.

On the face of it, the barebones frames, devoid of detail in the centre and frankly anything usually around the outer edges hint at a childish narrative - the kind of thing that is given to pre-school kids as the bright colours and chunkily lined faces are easier for them to follow. However, scratch below the surface and what you will find is an emotionally mature eulegy to the modern family unit encompassing all its strengths and flaws. The Yamadas are a five fold unit of dysfunction and bickering, comprising of the traditional patriarchal father Takashi, his lazy homemaker wife Mitsuko, her judgemental mother Shige and the married couple’s two children Noboru (a teenage boy with the weight of studying on his shoulders) and Nonoko (a young girl with the wide eyed enthusiasm and innocence that only such a child is capable of).

There is no overall story arc as such, obviously middle class families and everyday happenings rarely bring about exciting cinematic fodder, but the fabric of the film is woven around daily routines. Segmentalised into sections titled Paternal Supremacy Restored and the like, the result being arguably fragmental in nature but unique in the manner, as with all collections of vignette, in evoking a wider message of the smaller elements of life and combining with the pieces of the jigsaw around it to complete a whole picture that is somehow more than the sum of its parts. The drama manages to have something still of the Ghibli about it though, with animals and nature popping into frame and forming a handy segue feature from one shot to the next no matter how disparate they initially appear. The opening sequence is a wonderfully heady dream-like journey that can bounce around from a conversation about dinner to a wild boar springing across the screen into the next frame for no apparent reason. The groundwork is clear and concise though, the lines between reality and daydreams (and thus action and desired action, the world and its metaphors) is blurred. A wedding speech introduces us to the family as we see giant snails, windswept seas traversed against the backdrop of Katsushika Hokusai’s Great Wave off Kanagawa and finally babies born from cabbages and cut from bamboo stems; zany, comedic and instantly bewitching.

The rainbow effect of pastel colours, all muted and perfectly recreating the watercolour aesthetic, aid this leap, and far from it being an art style that is more at home on the page, the act of motion actually enhances this simplistic beauty. Isao Takahata has managed to orchestrate the sequence of shots in a manner that evokes the sweeping of a brush across paper, the tangibly gentle strokes that bring to life whatever is infused with colour beneath its bristles. In subject it may be odd but in many ways it is by far the most organic Ghibli feature there has been, even the drudgery of a train station cannot truly swaddle the sense of a frame populated with life.

The family dynamic is in essence the entire story, from which a general message will be drawn. Each character has a journey of sorts that they will progress on throughout the feature, but as with the story being centred around a typical patriarchal family, the role of the male breadwinner is often at the centre. Takashi the father is a bespectacled worker for a nameless company, smoking more than he should, constantly stressed and irked by his mother-in-law and his family’s lack of appreciation of his daily grind to put food on the table – the feeling that you are viewing a stereotype that couldn’t be more hackneyed if he were called Japanese Joe Average, is entirely intentional though. It is the commonality of families everywhere that should prove My Neighbours the Yamadas to be a universally apt film for all age groups and all nationalities. When terseness seeps in, such as an exchange of words between husband and wife after Takashi’s long day, it inevitable ends in humour – dry, unsmiling but all too familiar scenes that will unfold in households the world over.

The atmosphere has something of the Charlie Brown about it (emphasized all the more so by the use of child actors for the voices of the offspring and cutaway shots to the family’s pet dog, full of knowing looks and yawns), with melancholic life lessons permeating through each scene that could so easily have stumbled into joyous “happy ever after” territory. But the truisms are too hard to ignore and cut deep to the very core of what it means to share your life with someone you, at times, can resent but simultaneously care for. For instance, a simple walk taken by mother and daughter Shige and Matsuko, upon commenting on the glorious cherry blossoms the aged woman remarks that she is saddened by the thought that she will not see many more, at which time – as any dutiful daughter would – Matsuko remarks that she is only seventy, the inference is clear but upon hearing her mother’s reply that she will see thirty more seasons Matsuko drops to the ground in the wake of the comment in true cartoonish slapstick fashion. There is never any question of whether those we are watching love each other, but it is in the acceptance of each other and their own foibles, little resentments and acts of one-upmanship, that they retain their bonds as a unit.

For a film with such a unique artistic style, it is telling that towards the end there is one notable shift to slightly more realistic figures. As Takashi is bullied by his wife and mother-in-law to confront some rowdy motorbike and scooter riding teenagers congregating near their house, his walk towards them is shown in a new, less squashed and caricatured fashion, the outlines more noticeably human now, with the nervous middle aged man and the tough ne’er-do-well astride his bike highlighting the change due to the disparity between their forms. Reality can seep into even the most happy-go-lucky and artsy worlds, and the return to familiar shapes, seen in tandem with an act of manly failure, hammer home the sense of melancholy in jarring fashion. As with all the most enduring comic strips that can be appreciated by both adults and youngsters alike, a la Peanuts, humour without poignancy and reality without fantasy are too one sided to hit at the core of their audience. The true beauty of My Neighbours the Yamadas is its ability to mix the mundane failings that we all likely recognise in ourselves and others, with humour and the nonsensical flights of fancy that fill our daydreams, not dwelling for too long on either and wrapping both within an art style that is infinitely emotive. Like a magic eye puzzle, the level of detail seems to grow the more you stare at the often barren watercolours, as with any artwork the more meaning you attach to it the greater the significance of each minute stroke of pen or brush appears.

“As long as a family hold each other tight, they can somehow weather the wildest seas”

It may not be the most magical animation in terms of subject matter or story arc, but to me, thanks to its eye-catching style and insightful comedic observations about family life, it remains one of the most human and universal of the modern era, and that is a hard feat to achieve.