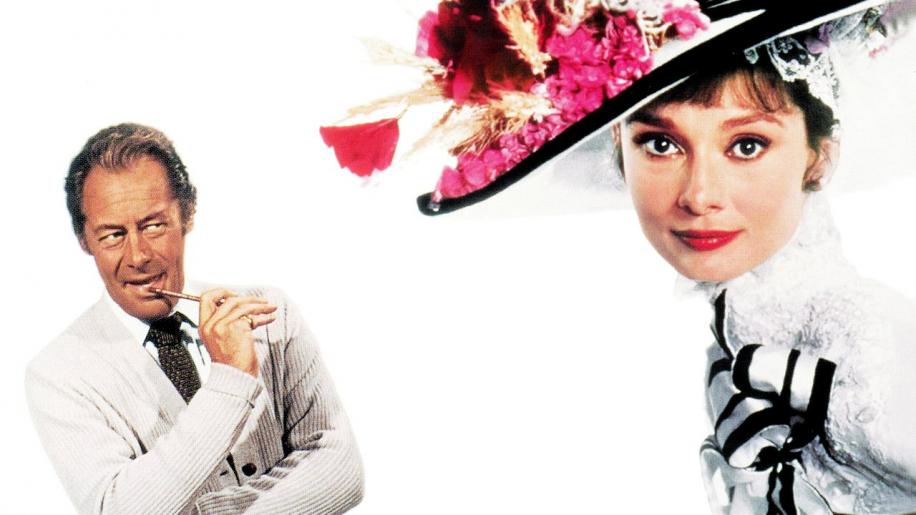 Over the last year or so, we’ve been pretty well served with the release of big screen musicals on Blu-ray. Julie Andrews has run up the hill in that Alpine pasture, Mitzi Gaynor has washed that man right out of her hair and Natalie Wood has found that there’s a place for her – all on the High Definition format.

As the classic musicals add to our collections we’re now treated to that fairest lady of all, ‘My Fair Lady’, on American Region free Blu-ray. Adapted from George Bernard Shaw’s ‘Pygmalion’ into a stage musical in the late 1950’s, the movie version danced all night at the 1964 Oscars and waltzed off with 8 Academy Awards, including Best Picture.

In this day of cutting edge CGI, pulse pounding car chases, deafening gun fights and push button instant gratification it’s still wonderful to watch a movie with such visual flair in its costume and set design – as well as immense charm and humour. That’s not to mention a brace of memorable musical numbers that have become standards over the years that sound just as fresh today as they did upon first hearing.

The tale of the working class London flower seller, Eliza Dolittle (Audrey Hepburn), taken on as a project by the arrogant Professor Higgins (Rex Harrison), who attempts to turn her into a sophisticated lady through elocution and deportment tuition. However, when the humble flower girl blossoms into the toast of London’s elite, her teacher learns a lesson or two himself – not least of which is that he becomes ‘accustomed to her face’.

While that might sum the story up in a nutshell, there’s all kinds of richness working in this musical. Julie Andrews had made the part of Eliza her own on Broadway, but Producer Jack L. Warner didn’t want her for the movie. Instead he cast ‘gamine’ Audrey Hepburn in the role, who delivered a certain warmth as well as a Cockney accent of which Dick van Dyke would have been proud. By Hollywood standards, it must have sounded pretty authentic. As Eliza moves from grubby street seller, her transition into a poised, refined woman is quite stunning. Ms Hepburn’s natural beauty shines through here in a way in which Julie Andrews (though loverly) could never have competed.

Warner also didn’t want Rex Harrison to reprise the role of Professor Higgins as he felt he was too old to provide the ‘love interest’ for Ms Hepburn, so he offered the part to Peter O’Toole instead. When O’Toole’s fee became too rich for Warner’s blood, Harrison campaigned for the role and won it by sending a recent photo of himself minus his toupee to the movie Mogul. It’s hard now to imagine anyone other than Harrison in the role.

The role of Eliza’s father, Alfred, went to the great Stanley Holloway who had played the part on the stage. He brings such life force to the character and his musical numbers such as ‘With a Little bit of luck’ and ‘I’m getting married in the morning’ provide a real ‘tour de force’ for the production.

The part of Colonel Pickering fits old stager Wilfred Hyde-White like a glove. His immense good breeding and niceness of character make him a perfect foil for Higgins’ brash, self centred pomposity.

Anyone who has never seen ‘My Fair Lady’ before will no doubt have the pleasure of hearing the songs playing over and over again in a mind loop thereafter. For the last week, I’ve been trying to blot out ‘On the Street where you Live’, ‘I could have danced all night’ and others as I’ve tried to concentrate on editing films for corporate clients. Particularly annoying when you’re trying to cut to the beat of a piece of music. But that’s the effect that the musical numbers have. They get right inside your brain – simply because they are so well written and performed.

Directed with a firm hand by George Cukor, ‘My Fair Lady’ makes good use of the full widescreen stage. As much of the action takes place within Higgins’ home, it seems odd that widescreen was the format of choice, but the Covent Garden set and the Ascot enclosure fill it in an eye pleasing way. It’s a very beautiful looking film and such a terrible shame that it was allowed to deteriorate until its condition was discovered in the early 1990’s. A remarkable restoration was undertaken by Robert Harris and his team, resulting in the 1994 re-release with a mass of work being done to pull it back from the edge of extinction.

That was 17 years ago, so you’d now expect it to have been tidied up using the digital restoration techniques that have emerged in the intervening years, so that its Blu-ray release would be as beautiful as Ms Hepburn. For more on this, please see the Picture quality section of this review – and don’t get your hopes up too high.

All in all, we have a multi-Oscar winning movie that deserves to be treated like a lady. What can be said that an exasperated arm gesture can’t communicate more effectively?

It would appear that it’s a mistake to care.