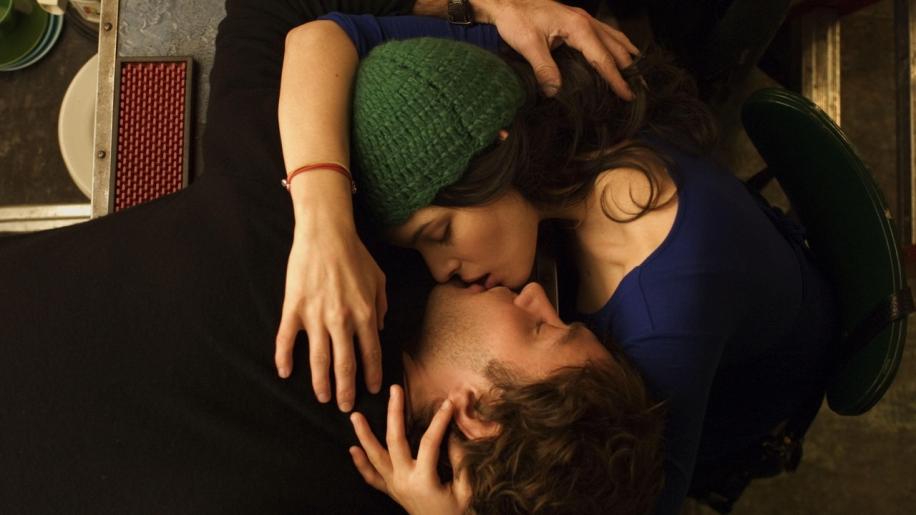 Talent comes in many guises though very few are blessed with broader genuine gifts. My Blueberry Nights places Norah Jones centre stage in what is her acting debut. Whilst singing is one thing, acting is quite another. It really wouldn't be the first time that someone trying to cross this particular divide comes a cropper.

In all it's quite a bold move for anyone to do this with an unknown quantity but that's exactly what director Wong Kar Wai decided to do here. Being his first foray into an English language film made the move doubly so as it effectively put two major reputations on the line here.

There is no doubt that as a singer Norah's had a meteoric rise to fame and the acclaim is not undeserved. She's blessed with a divine singing voice and her musical success has clearly brought her enough attention to create the opening for an acting opportunity. These things happen. It's not an easy debut by any stretch of the imagination and thankfully she is helped somewhat by performances from Jude Law, David Strathairn, Rachel Weisz and Natalie Portman.

Jeremy (Jude Law) runs a small café come diner in New York. New York is a busy metropolis and it's pretty difficult to remember people and strangers by their names, you can possibly do so by faces, bizarrely by the dessert that they eat and even more so by what they regularly order as food. I guess that's the way it is in a busy little New York diner!!! How a Mancunian has ended up in the big apple running a place like this is a strange story in itself, but all is revealed a little later on in the film.

Elizabeth (Norah Jones) uses it as a meeting place to hook up with her boyfriend but on this occasion he never shows. I think you get the story..... Her boyfriend 'pork chops' had been to the place a day before, accompanied by a 'another'. This unwitting little revelation from Jeremy is enough to stick the final nail in the coffin of her failing relationship.

Even though they are both perfect strangers they take comfort and gain familiarity with where the other stands. Jeremy takes time to listen out and Elizabeth needs a willing audience. Isn't it strange that you can sometimes pour your heart out to a complete stranger and find a truer companion that way rather than through those closer to you who can be so distant in this regard? Well it's certainly a quirk of life and it's one that Wong Kar Wai has brought into this movie and one the movie revolves around.

What is rather quaint is that Jeremy also keeps a jar behind the counter for all the house keys that these jarred relationships invariably leave behind. Yes, it's not just a diner for all sorts it's also a diner for the lonely hearts. The keys represent the doors that are left closed through choice, through hurt, through realisation or simply through common sense having to accept when a relationship is over. No surprise then, that Elizabeth's house keys end up in the jar alongside all the rest and believe you me, every key in the jar tells a sad story. A few late nights at the diner, pouring her heart out, she gains solace in sharing a blueberry pie and ice-cream with him. It sparks a strange friendship of sorts.

Unsurprisingly Norah is quite wooden in her role play early on and it's quite apparent that she struggles with the part. Matters are not helped by the disjointed style of editing that adds precious little to the continuity film. In actual fact I found the editing quite distractive and quite annoying. Wong Kar Wai chooses to use time lapse techniques at odd times throughout the movie and it simply doesn't work well at all. It doesn't suit the movie and its unnecessary.

Anyhow Elizabeth decides to set off across the US of A to find herself and to try make peace with her own mind. She can't forgive and she can't forget but she feels that she needs to find herself to be able to accept. Her travels take her to Memphis Tennessee and Las Vegas Nevada where she makes do in a host of part-time bar and waiting jobs. To give more purpose to what she is doing she decides to save up for a car along the way but the nature of her varied work allows her to meet a number of colourful characters. These new found acquaintances leave a lasting effect upon her.

David Strathairn plays an alcoholic cop called Arnie Copeland. His wife Sue Lynne Copeland (Rachel Weisz) has left him for another man, so he spends his evenings hammering the drink at the bar where Elizabeth works. It's a pitiful sight, a man troubled with his personal affairs, weighed down by alcoholism, embroiled in self pity and quite hapless in trying to do something about it. Lesson in life for Elizabeth is no matter how bad you feel about your own problems there is always someone worse off than you. The demons in life will always strike you, but it's the getting up, dusting yourself down and getting on with it that matters.

Arnie ultimately meets a sad demise and bizarrely it's only then that his wife realises what she has actually lost. There are echoes of an old cliché in there somewhere but she realises the worth of the relationship that she's lost, when she actually loses it. The performances by both David Strathairn and Rachel Weisz are satisfyingly strong and Norah certainly gains confidence bouncing off the quality on offer. It adds much needed character to the movie and you can begin to feel Norah easing into acting the role.

Moving on from Memphis, Elizabeth then finds herself working in a casino in Las Vegas Nevada. Here she meets an incessant and feisty gambler by the name of Leslie (Natalie Portman). Her forte is poker and she's a dab hand at it, both in playing the cards as well as playing with hers and others feelings. Natalie Portman plays a wonderful part and for me this was the standout highlight of the film. She's bubbly, she's fun, she's throwaway but she's certainly not shallow or stupid. It's a pleasant surprise to see her playing a part like this and doing it so well. It perks the movie up no end.


After a poker game where she loses big, she befriends Elizabeth and somehow manages to get here to stump up all her savings to help her out in one last big game. If she wins, Elizabeth gets a share of the winnings, if she loses Elizabeth gets to keep her Jag. It's certainly not the character of Elizabeth that's been built up in the film by Norah but Wong Kar Wai throws a spanner in the works to try to fragment the character of the rather straight sensible girl.

The true outcome of the poker game remains unknown until quite sometime afterwards. In the meantime we are taken on a trip where Leslie is told that her father has been taken into hospital. Refusing to accept this through a means of constant denial, she feels that life itself is a poker game with inner most feelings being the very last hand that anyone should have to reveal. It's a dangerous hand to play especially when she discovers that her father has in fact passed away in hospital. Once again the point of not knowing what you've lost until you've lost it hits home but Wong diametrically opposes the reflection of loss here in each of the characters. A denial as opposed to self pity, an acceptance as opposed to bravado.

Many thousands of miles later Elizabeth eventually finds herself right back where she started. Outside the little old diner in New York, staring up at the flat she once shared with her boyfriend. You may ask what of the journey if all you do is end up right back where you began ? It's actually the question and answer that Wong Kar Wai builds to throughout the movie. Having been there, seen it and done it, it matters little if you end up standing where you once started. If you stand there as a contented person, at peace with yourself and ready to move on, then you've travelled a journey that's been worth its while.

Now all the while, whilst on her travels Elizabeth never stopped writing to Jeremy. Unaddressed postcards telling him of her life, who she meets, what she's been doing, what she's feeling and how she's changing keep landing at the doorstep of the little old diner back in New York. The postcards land like seeds upon fertile soil and the words within evoke a deeper longing in Jeremy. It's a longing that leads to an inevitable conclusion. It's also an ending that brings us one of the most sensitive and tender moments that you're ever likely to see.

My Blueberry Nights is not Wong Kar Wai's greatest work, it won't be remembered as his greatest and Norah Jones struggles for the most part to deliver. The film is poorly edited but on the other hand it's beautifully shot and it's a film that's worth sticking with to the end. For all it's faults, it does strangely still work ? Not sure why but it just does ? It's a bizarre journey and it's an enlightening experience at the same time. It's a difficult movie, it's not straightforward but it's accessible in a Wong Kar Wai kind of way and for that reason it's worth a watch.