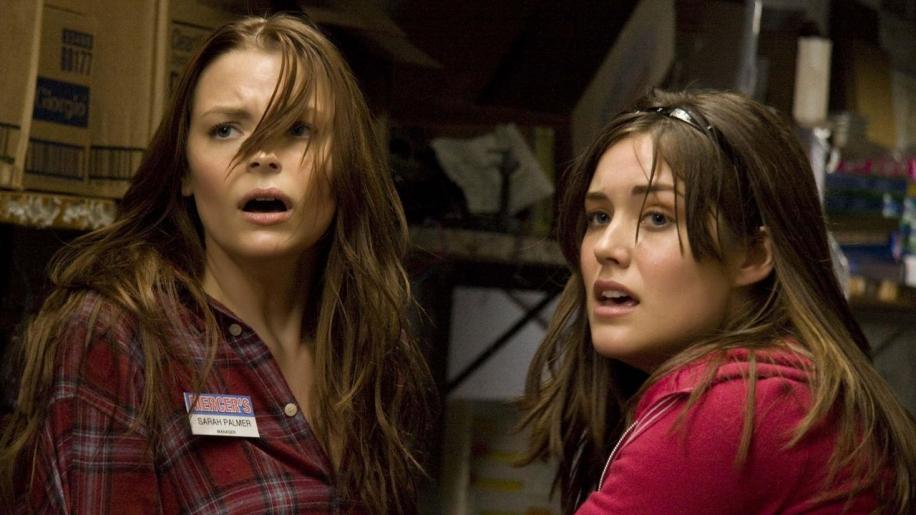 I finally get the chance to look at one of the first Real-3D films, and the very first R-rated 3D film, My Bloody Valentine which has long been available and has indeed already been reviewed quite comprehensively on site, albeit the anaglyph version, so I’m confident that most will already know the synopsis of the film; I therefore don’t intent to spend much time here, but rather concentrate on the native 3D of the picture, but just for completeness I shall add a few thoughts and musing on this, the remake of the 1981 slasher of the same name.

I remember watching the original film way back when it was first around on unregulated home video and quite enjoying the twists and turns, the final reveal, the reasons behind the carnage and revelling in the delights of pick-axe mayhem. So it was with a little trepidation that I spun this remake, knowing full well that in the post ‘Scream’ years, film-makers have to be ‘clever’ to keep the audience guessing, rather than just gore for gore’s sake. Sometimes it works, more often than not it protracts and aggravates when suspension of disbelief is stretched beyond the limits it should itself set. This version of My Bloody Valentine tries valiantly to straddle two genres; teen savvy and gross out horror and it oh so nearly manages it.

Starting off in true graphic form, Harry Warden wakes from a coma after being trapped underground, the sole survivor of six minors, and, for reasons unexplained, goes on a murderous rampage dressed in his mining gear, including mask, and wielding his pick-axe, dispatches twenty two people; some in the hospital and some kids that are using the abandoned mine for an impromptu party, before being finally shot and presumed buried alive when the authorities finally arrive on site. Of those that survived the massacre are Axel Palmer (Kerr Smith), his girlfriend, Irene (Betsy Rue), Tom Hanniger (Jensen Ackles) and his girlfriend, Sarah (Jaime King) who will all feature in the coming story. After ten years, it seems Harry is back up to his old tricks as mutilated bodies start to turn up and the police are unable to stop the elusive masked killer as he cuts a swathe through the towns’ people using his trusty pick-axe. Or is he, for surely Harry is dead and buried with only the media keeping his name alive when every year, on Valentine’s Day, they descend on the town stirring up the horrific memories? Something is clearly not right with the small mining town of Harmony for as the bodies start to pile up, so do the suspects; maybe Harry is back from the dead, or maybe he has any number of copy cats.

Of course, setting up a ‘mystery’ to who is the killer is nothing new in slasher movies, the original used the same hook, but where this remake tries to break new ground is by giving fairly weighted back-stories to the characters, i.e. motivations to their actions and whilst I applaud the idea, and indeed, for the most part, the execution, it seems that the film doesn’t really need this extra level – it’s a teen gore flick, are we really bothered by an intense rivalry between the two main male leads, or do we just want to get to the gore? It is a very fine line; we do need the emotional involvement with the characters so we can empathise and care for their plight, but layer it on too thick and it becomes soap opera, unnecessary and boring. In this regard director Patrick Lussier, at the time little known with nothing other than third rate sequels to his name, manages to get the balance just about right. The rushed introduction of Axel, Irene, Tom and Sarah manages to lay down their dynamic so when we return ten years later to a very different town, and a very different dynamic, it all seems plausible. Tom’s return to sell off his family’s mine, the cause of all his emotional turmoil (it was his failure to vent methane that caused the initial collapse and thus instigated Warden’s murderous spree) is met with plenty of resentment by the whole town that survives due to the employment it generates. The only person willing to give him the time of day is Sarah, his old girlfriend, though she is now married, with a child, to Axel, now the town Sheriff (although he’s way too young if you ask me). Thus we have a love triangle with each playing off the other, with the two males both having reason to be suspects in the murders.

Lussier also keeps the gore level high; the horrific massacre at the hospital in the beginning, of which we only see the aftermath, is gruesomely demonstrated (looks spectacular in 3D too, all about those open chest cavities!) and he doesn’t hold back for the impacts either; Warden’s pick-axe slices and dices, bludgeons and eviscerates with plenty of the red stuff sprayed everywhere, including at the camera (delightful in 3D!) though the occasional usage of CG enhanced blood does stick out like a sore thumb. He even puts in a protracted sex scene with full frontal nudity, no less. In this regard the film is delightfully retro, a real throwback to the eighties slasher genre from whence it drew is inspiration. The commercial decision to shoot in 3D was also a winner, using the technology to keep effects in your face, more than it does push the frame back. Aesthetically frame depth is far more satisfying, it is, after all, how we see the real world, to have things shoved in your face just smacks of the early usage of 3D, but, as the film wears its retro badge clearly on its sleeve, I can forgive it. There are signs that frame composition were being thought about, I expand upon this in the picture section, and Lussier clearly used this experience to learn as is evident from Drive Angry, his second foray into R-rated 3D whose framing is all the more mature (though still with plenty of ‘in your face’ material).

Where he does drop the ball, though, is with the fright factor; and for a film that is meant to be horrific and frightening, that is harder to forgive. There is no denying that the ensemble of Harry Warden looks the part – boiler suit, gas mask and pick-axe – it is imposing and it is frightening. But whenever he turns up, no matter what the situation, be it “Here’s Johnny!” smashing down a flimsy door or silently standing just out of sight, there isn’t that impending dread, no cold heart, or sweaty palms – even my partner who loathes all things horror was not intimidated by him. It may have something to do with ‘humanising’ him, watch as he can be kicked and knocked over, it may be something that is increasingly hard to judge post ‘Scream’ (though ol’ Ghostface is still pretty threatening in Scre4m), or maybe Lassier simply didn’t manage to evoke enough horror with his killer. In reality, of course, it’s a combination of all these elements. It doesn’t make it a bad film, just obvious, but, again, this was the point of the picture – the filmmakers are quite candid about this fact; and who are we to argue with that?

After the credits have rolled the film is unashamed in what it tries to do; exploit 3D giving the audience a throwback slasher with plenty of sex and gore, yet sassy enough to enable reasonable characters and a tangible whodunit – watch it with that simple mindset and you won’t be disappointed; don’t expect anything more as there simply isn’t anymore to give.