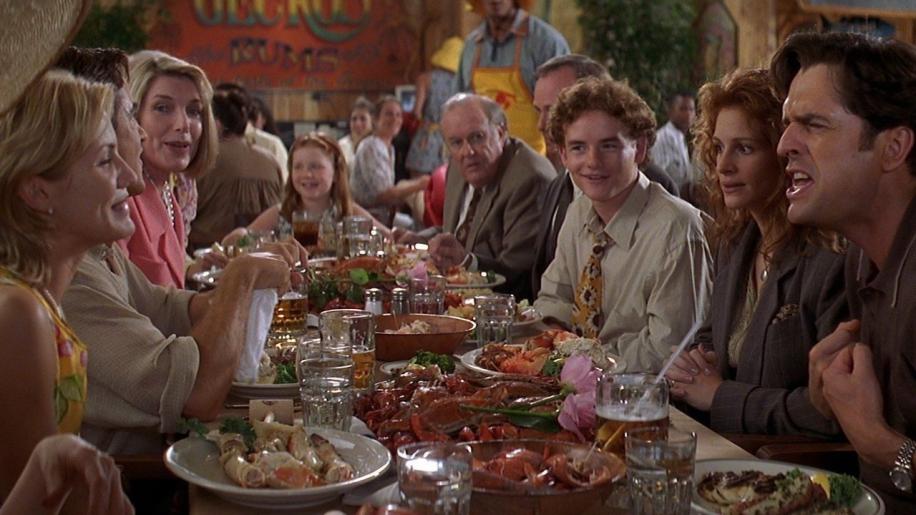 In 1994 Australian director brought to our screens Muriel's Wedding, an intelligent and often understated comedy with Muriel transforming out of her shell finally realising that she too could be part of the crowd, she too could have her dreams realised even though perhaps those dreams were tinged with a hint of satirical irony. So when three years later he's approached by producer Jerry Zucker to direct Julia Roberts in the 1997 My Best Friend's Wedding, he seemed like an obvious choice.

Julianne Potter (Julia Roberts) is a food critic who has never found true love; well she has but she just can't admit to either herself or the man of her dreams. Said man, Michael O'Neal (Dermot Mulroney), has though found his soul mate and, Julianne being his best friend, decides he not only has to tell her but invite her to the wedding. Julianne's shocked to say the least, she had hoped that a pact she had made with Michael that if they were both single come their 28th birthday then they would marry would shortly see fruition.

Reluctantly she agrees to attend but has an ulterior motive; in the four days before the marriage takes place to drive a wedge between Michael his fiancée and soon to be wife, Kimberly Wallace (Cameron Diaz). With the dubious support of her editor, George Downes (Rupert Everett) she boards a plane to Chicago to meet Michael, Kimberly, Kimberly's family and faces the prospect of becoming maid of honour to a woman who looks likely to steal the man she has set her heart upon.

Whatever J.P. Hogan found to direct his earlier enjoyable Muriel's Wedding just didn't quite stick for this feature, the base storyline is perhaps an interesting enough idea if executed properly but this one just never quite hit the mark. Julianne initially comes across as a hard working, respected critic who has some emotional issues with commitment and from this angle she's a character you have some pity for, someone who you think should come to terms with her shallowness and through the film hope she'll find it within herself to bless the relationship of her so called best friend and from there move on a more confident person. This is not to be the case though and the old saying “if you have friends like these then who needs enemies” could have been directed at this film because Julianne really has nothing other than her selfish desires at heart and has no thought for her best friend and the woman he has chosen to love. Towards the end she becomes a despicable character hell bent on driving the two of them apart and as such any sympathy we might have had for her character at the start really flies out of the window rapidly.

The casting of Dermot Mulroney was something of a strange choice in my opinion as he has no on screen charisma at all and why one of these women, never mind two, should fall head over heels for him is quite frankly way beyond my own limited comprehension. He and Roberts have little to no on screen chemistry and rather than being friends who would confide in each other they seem not to know each other at all, only perhaps knowing how the other orders a margarita. He has better presence with his fiancée but this is really due to Cameron Diaz really acting up the poor little besotted rich girl intent on doing anything, even to her own detriment, to make sure Mulroney is there standing at the altar. Diaz plays an intelligent yet dizzy intern who is willing to sacrifice her entire career to make sure Mulroney is her husband and this in itself hits all the wrong marks. It may have gone down well in say a Doris Day comedy of the 1950's but with the 20th century rapidly running out it would never hit any of the right notes with the majority of women viewers out there. The two appear to be besotted with each other yet in a cringe inducing scene where Mulroney and Diaz are discussing him putting his own career on hold to help out her father's very successful media conglomerate Mulroney has such venom in his voice and such disdain in his face that I could never imagine this relationship getting to the first base of marriage. Ultimately then Mulroney is miscast or his role is woefully badly written.

There is a breath of fresh air from UK born Rupert Everett who quite literally ends up stealing the show. He continually badgered Hogan to change the ending so that he was also at the final wedding, Hogan refused until test screenings when feedback indicated that an alternative was required. Ultimately Everett's request became reality. In all other areas though he outshines his peers; perhaps because he's really the only worthwhile character in the entire film. He's the voice of reason to Julianne's self obsessed madness and when he's on screen you're at least getting a good watch and a few laughs, when he's not there the film is a rather dry affair.

My Best Friend's Wedding is not a film or film genre I would normally go for, it's really directed towards the so called 'chick flick' ensemble and to these ends my partner, Margaret, firmly assured me that it was a good enough watch. However when we sat down to discuss the film itself with no prompting by myself she agreed that it hadn't lasted well and she now can see it in a different light to when she first saw it. Perhaps then My Best Friend's Wedding, doesn't pass the test of time and will never reach heights of other romantic comedies such as Father of the Bride, Four Weddings and a Funeral or the excellent My Big Fat Greek Wedding. It did well at the box office there's no doubt about that but then Julia Roberts does have that box office appeal. In terms of longevity though it just doesn't have it, well at least not for me.